Receiving pallium, Archbishop Cupich asks faithful to minister with him 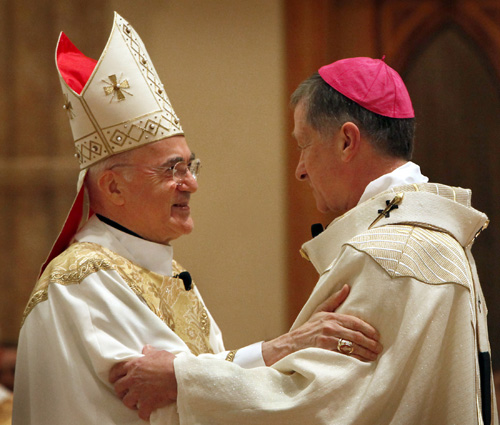 CHICAGO (CNS) — When Archbishop Blase J. Cupich of Chicago received the pallium on his shoulders Aug. 23, he did so in a demonstration of unity that he said extended from the people in the pews to the bishops who joined him in the sanctuary to Pope Francis.

He was invested with the pallium by Archbishop Carlo Maria Vigano, apostolic nuncio to the United States, after receiving it from Pope Francis in the Vatican on June 29.

The pallium is a strip of white wool, about two inches wide, with six black crosses. The ends, which hang down about a foot in the front and back, are black and look like the hooves of a lamb carried on the archbishop’s shoulders. Three of the crosses have gold pins through them, reminiscent of the nails of Christ’s crucifixion.

Overall, it serves as a reminder of the role of the archbishop as shepherd to his people.

In his homily, Archbishop Cupich reflected on the readings of the day, especially the Gospel, in which Peter speaks for the apostles and says they will stand by Jesus because they are convinced he is the “holy one of God.”

“All of this invites us, then, to sit with the Word God and reflect on what is being asked of us, as the successor of Peter through his representative places the pallium on my shoulders as the pastor of the church of this City of Big Shoulders,” he said. “And, I do mean us, for I know I cannot carry this important responsibility by myself.”

The occasion was historic, as Pope St. John Paul II started the practice of bestowing the pallium on newly installed archbishops every year on the Feast of Sts. Peter and Paul, June 29, in the Vatican. Pope Francis decided to change that process this year, calling the archbishops to Rome to receive their palliums on the feast day, but having them placed on their shoulders by the pope’s representatives in their own archdioceses. That allows the archbishops to share the occasion with their own people and with the bishops of the other dioceses in their provinces.

In his homily, Archbishop Cupich said the entire church must seek out the lost sheep.

“Our commission begins with searching out the lost, but it does not end there,” he said. “Once found, the lost are to be lifted high above the daily toil, so that they may see their salvation as but another of the mighty deeds of God over the ages, so that in being raised high they will experience the newness of risen life and by being lifted to eye level, they will see Christ face to face and come to believe in God’s love.”

In doing so, those who find the lost sheep are only passing on the good that was once done to them, the archbishop explained, because like Peter, “a man weak and sinful by his own admission, and the church’s,” every person has strayed from the path the Lord set.

“Just as Peter’s faith is a model for us, his poverty and lowliness is too, as we take up this share in his ministry,” Archbishop Cupich said. “A great reminder to us, that while we are honored to join in this service and leadership, we do so as poor beggars, depending not on our accomplishments and strengths but on his grace and mercy. For, like St. Peter, we know the value of lifting up to shoulder level the lost, for we have been lost ourselves.”

Archbishop Vigano also emphasized the role of the archbishop in preserving and defending the magisterium and the teaching of the church in unity with the Holy Father, so that the church remains one and universal.

Archbishop Cupich said the pope must make sure that the whole deposit of faith is remembered.

“His service is needed lest we begin to treat the church’s tradition too narrowly and forget the history of our faith and the treasures we have,” he said, using, as an example, Pope St. John XXII’s call to remember the importance of mercy at the opening of the Second Vatican Council, at a time when “when many in the church preferred the narrow path of severity and condemnation.”

The day’s second reading, from St. Paul’s letter to the Ephesians, explained the relationship between Christ and his church as being like that of a husband and wife. While many people now squirm at the passage that reads, “Wives, be submissive to your husbands,” Archbishop Cupich said that in the early church, many people would have been far more uncomfortable with an exhortation in the same section for both spouses to be subordinate to one another.

In a nod to the upcoming synod on the family, the archbishop said, “People in this era of the early church would have found this quite astonishing, if not revolutionary. Subordination in a family was not a two-way street at that time. Christ was doing something utterly new in the human family, changing how people understand their relationships with each other as family.

“With the upcoming synod, it is clear that the Holy Father is calling the church to examine our categories of expression about what we believe and be open to new avenues and creativity when it comes to accompanying families. All of this has much to say to us in Chicago, that we not settle for solutions that no longer work, expressions that no longer inspire and ways of working that stifle creativity and collaboration.”