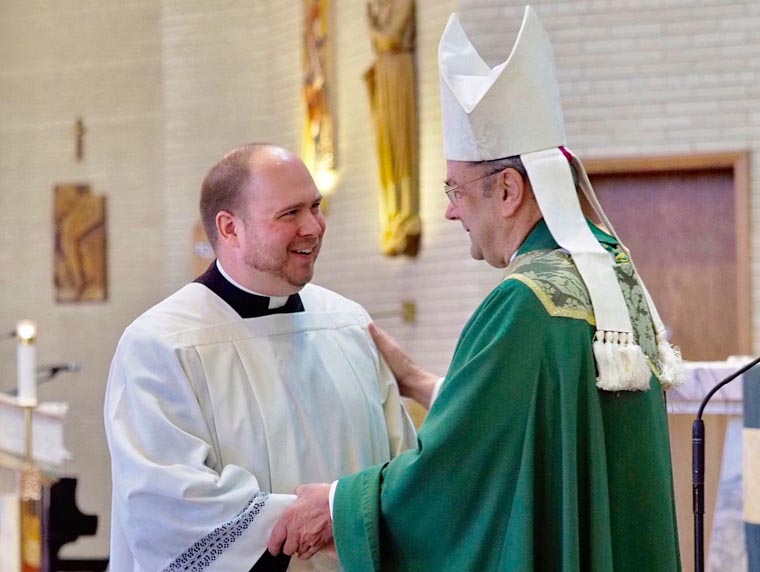 Back at St. Mary’s Seminary and University in Baltimore after a year of pastoral service in Utica, diocesan seminarian Nate Brooks said, “this year flew by so fast for me.”

The Sun caught up with Brooks by phone four days before his April 21 ordination to the transitional diaconate. The rite, to be celebrated at the seminary’s chapel, will bring Brooks a step further on his journey toward ordination as a priest, anticipated to take place next June.

Brooks’ call to the priesthood came after college and careers with Hampton Inn and Target. The second of Patee and Randy Brooks’ three sons, young Nate Brooks didn’t see his future as a priest.

“It always kind of scared me, the thought of that, so I always pushed it away,” he said. With the benefit of hindsight, he now knows, “It was helpful to have that nudging in my life.”

With the example and support of Father Chris Celentano, pastor of his home parish of Divine Mercy in Central Square, and two other priests in the town where he was working at the time, Brooks ultimately discerned his life’s vocation and entered formation for the Diocese of Syracuse.

For the last year, Brooks has been studying homiletics, diving deep into preparing homilies, writing and presenting them, and getting feedback from his peers. “No one’s more critical than your classmates,” Brooks said with a laugh.

Another class, Sacramentology, focuses on the Sacraments of Initiation — baptism,  confirmation, and the Eucharist — and prepares students to preside over those sacraments. Pastor as Catechist, meanwhile, prepares students to be in a parish and teach everyone, from kindergarteners to elderly folks, Brooks said.

Brooks had a chance to put that classroom theory into practice this year. Assigned to serve at St. Mark’s Church in Fallston, Md., Brooks said the pastor, Father Jerry Francik, tasked him with preparing three teenagers to receive First Eucharist and Reconciliation.

“I had never done that before,” Brooks said. “I was nervous about relating to them.” But he developed and implemented a learning plan for the students, who ranged in age from 14 to 16, and found he was learning a lot as well.

“To be honest, it was one of the most beautiful things I did this year,” Brooks said. “It taught me so much about myself. I created this bond, this relationship, with these three kids, and they said they got a lot out of it. It was just a joy to work with them.”

With his ordination as a deacon approaching, Brooks said he was most looking forward to preaching and baptizing.

Baptism is “the sacrament that brings someone into the Church and opens them up to graces from God,” he said. “To be able to be a minister… to be part of a child’s or adult’s life, to me, I think it’s going to be a such a beautiful ministry to be a part of. We believe it’s Christ working through me — I’m so excited to be there for the journey, to allow God to use me as his instrument to bring people closer to the Church.”