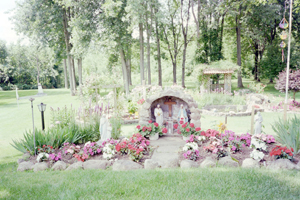 When Joe Casper says, “Gardening is a religious experience,” he means it. His beautifully landscaped front lawn is just a tease for what is behind the house. “I’ve lived on Connell Terrace in Baldwinsville for the last 45 years and have been a weekend gardener since the day I moved in,” he said as he paused by a tulip bed, a gift from his daughter when she vacationed in Holland.

Casper first started gardening with tomatoes, beans and carrots, and while he still plants a few vegetables, he is more devoted to flowers. Since his retirement as an engineer at General Electric in 1990, he has more time to dedicate to what he loves most — gardening. His pale green colonial home is situated on an acre of land. In the center of the backyard is a sanctuary, with a wooden arbor beckoning guests to step inside. There is a blue slate stepping stone footpath to guide visitors in for a closer look.

“My son, Joe, and his wife, Amy, gave me 20 Jackson Perkins roses. That was the first thing I planted in this garden,” he said, pointing to them. “Roses are the most beautiful flower, and the hardest to care for. Cultivating a garden of flowers is a lot like raising children. You plant and take care to help them grow. Some require more attention than others,” he said. Casper pointed to the place dedicated to perennials. “You can stick perennials in the ground and leave them alone, and they practically take care of themselves, with a little help from God.” The showcase is a grand pergola with two wooden benches for sitting; perfect for listening to the trickling waterfall that cascades into a swirling pond stocked with a copious supply of golden coy. “My granddaughters, Juliana and Andrea, have named all of the fish,” he said.

“I’ve been building this since the spring of 2003. I built it all myself. At 81, that’s no easy task,” he said. “Every year I add new plants to replace the ones that don’t survive the harsh winters. During the winter I think about what new plants I can try. I do have my favorites. I love roses, impatience and begonias, but I have to expand my horizons and experiment with different flowers, too. I like annuals for their long blooming season, but that costs a lot of money for just that one short season.” He confessed he allocates $300 a year on that garden. Casper buys a third of his flowers from Jackson Perkins catalogs, and the rest from local green houses and the farmers’ market. Casper also admitted that he uses different brands of fertilizers, rotating them periodically throughout the growing season to reap bigger blossoms and healthier plants.

Money isn’t the only thing he splurges on that backyard oasis. He spends a lot of time. “Thirty hours a week,” he admitted, “And I’d spend more time if my wife let me.” He laughed lightheartedly as he said he puts in less time working as the summer lingers. “I like to keep this garden weed-free. Weeding takes up a lot of time. I’m on my knees pulling weeds about an hour everyday. I figure as long as I’m prostrated, I might as well pray.

In the center of his garden stands a five foot wooden cross with the body of Christ on it. “I know it isn’t a typical garden statue. I planned its grandeur to pay reverence to God. As a youngster I adored my grandfather’s backyard where he built a shrine to the Virgin Mary. It was a sacred place that I loved. I wanted one of my own on a larger scale so I could see it from any window inside my house.”

“Gardening is a great stress reliever. I solve a lot of my problems when I’m deadheading flowers and tooling around in the soil. I feel like I become one with the earth. I thank God for the many gifts he’s given me, not just the flowers. I have holy statues in my garden as a reminder that God is the reason I exist. I’m proud to display them. These images give me something to aspire to — the likeness of the holy family,” he said.

Casper and his wife Barbara arranged their family room furniture to overlook the garden. They burn holy candles in the grotto all year long. “It’s especially pretty at night, seeing the candlelight illuminating the statues of Mary and Joseph,” he said. He and Barbara take turns replacing the candles when they burn out. “It’s only a minor inconvenience to go out in the rain. Sometimes we get so much snow that it’s hard to see the candles, but we clear it away and keep the fire burning,” he said. When they sit inside in the warmth and comfort of their home, they look out at what Casper created and pray the rosary, offering the prayers in thanksgiving for all of the blessings they have received over the years.

It’s important for Casper to keep the garden in tiptop shape, so he’s outside a lot. “When I’m out in my garden surrounded by all of this beauty, it’s as if I’m in my own little world, the same feeling I might get from sitting in church, and I thank God for that. And sometimes I even pray for rain.”