The close-knit Triple Cities community was still reeling last week in the wake of a rampage that took 14 lives on Friday, April 3. 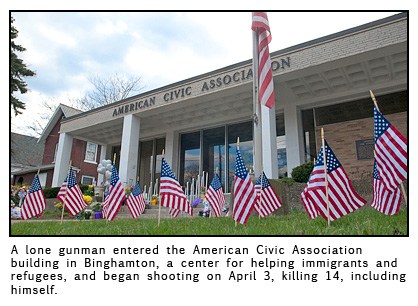 Jiverly Wong, 41, had been learning English at the American Civic Association before he entered the building and fired nearly 100 shots at both employees and people participating in a citizenship exam before shooting himself.

The incident was particularly troubling to the immigrant community, for which the American Civic Association center had been a substantial help as they acclimated to a new life in the U.S.

Workers and volunteers at the center had helped many of the mourners at Sacred Heart Ukrainian Church in Johnson City. Those mourners gathered Wednesday, April 9 for the funeral Mass of part-time caseworker Maria Zobniw.

Austrian immigrant Krista Cadorette was among those who packed the tiny church. “They were very helpful all around. This person made a huge difference. Maria made a huge positive difference,” said Cadorette. Although she was ethnically Ukrainian, Zobniw was born in Austria and Cadorette said that helped the two of them form a bond.
Parishioners at Sacred Heart described Zobniw as a pillar of the Ukrainian community and the Triple Cities in general. “In this community it has had a huge impact,” said Sacred Heart parishioner Robert Watson. “She was so giving and so kind to everyone. She helped everyone.”

A family friend and fellow parishioner at Sacred Heart, Myron Krajnyk, said, “We’re still in a state of shock. We consider our community a small city with a small town atmosphere.”

Krajnyk stressed the importance of the American Civic Association for immigrants in the Binghamton area.
“A lot of us or our parents went through the Civic Association experience with them helping our way through post-World War II Europe to America and integrating us into American ways and the American system, language and traditions of America. My parents went through there and we appreciate what they did for us,” he said.
Father John Putano, the pastor of Our Lady of Sorrows Church in Vestal and Vicar of the Southern Region, was among the clerics who gathered to concelebrate the funeral Mass.

“I think it’s been a difficult time for all of us as we deal with this senseless tragedy and the loss of innocent life,” said Father Putano, a Binghamton native. “We’re all feeling the pain of this loss to the community and the lives of many wonderful people, especially many of the immigrants to this country.”

Wong himself had been a student at the center. He had recently lost his job.

Father Putano’s own mother had used the center to acclimate herself to the U.S. and Binghamton.
“It’s been so important in the lives of so many of the immigrants over the years. My own mother was a part of that when she came to this country for her citizenship. She was very much a part of that organization,” Father Putano said.

Father Putano was among the 15 clerics of multiple faiths who gathered at the Catholic Charities of Broome County building, on Friday, April 3 to help comfort and counsel families that had loved ones held hostage during the incident. Many of those families did not know whether those individuals in the center were alive.
Cindy Falise, director of Catholic Charities for the Syracuse Diocese, praised the local response by the agency.
“I’m absolutely impressed with the way Catholic Charities Broome County responded,” Falise said. “They immediately opened their doors to victims and the loved ones of victims. It’s wonderful. I’m absolutely awed by what they’ve been able to do.”

At the time, their staff was caught undermanned with director Joe Slavik having just left for vacation and deputy director Lori Acardi at a conference in Albany. As soon as they heard the news, both found ways to return to Binghamton as soon as possible.

Despite being away, Slavik was contacted by the authorities as soon as the incident began. They asked if Catholic Charities could provide families of the victims with a safe haven. “I was extremely proud of how they reacted with both of us out,” Acardi said.

Catholic Social Services Director Dann Yeager was the senior-most administrator on-site when the scope of the incident became apparent. Yeager said that the days since the event had passed quickly. “It’s been a blur,” he said.

After a routine stop at one of Catholic Charities’ local food pantries, Yeager arrived at the office. One ambulance screamed past him and then another and another. Around 10:45 a.m., he knew something disastrous had occurred when he turned on the television. Shortly thereafter he sent an e-mail alerting employees to the situation and then the authorities contacted Catholic Charities asking for their assistance.

The center opened again on Saturday and Sunday as many relatives were still awaiting word regarding loved ones who had been in the center during the shootings.

Along with Father Putano and several other priests of the diocese’s Southern Region as well as clerics of other faiths, retired pastor Father Laurence Lord was quick to lend a hand. Around 10:30 a.m. he was made aware of the situation at the center via police scanner and he arrived on the scene at 10:40 a.m. “I knew it was bad,” said the former pastor of St. Patrick’s Church in Binghamton.

Father Lord has been a police chaplain for 40 years and has multiple certifications in critical incident stress management. “After 40 years nothing surprises you,” he said, but noted that this situation was the most significant of his vocation because of “the gruesomeness of it.” “No one was prepared for what they saw that day,” Father Lord said.

Shirley DeLucia, a parishioner of St. Andrew’s/St. John’s Church in Binghamton, was among the heroes of the day. DeLucia was shot early in the incident but played dead long enough to place a call to the authorities through 911.
St. Andrew’s/St. John’s pastor Msgr. Michael Meagher visited DeLucia several times last week, while she remained in intensive care.

“[There’s] concern, but also admiration for who she is,” Msgr. Meagher said. Like many residents of the Southern Tier community, Msgr. Meagher expressed shock that such an incident could occur in Binghamton.
“It’s not the kind of thing you expect when you think of Binghamton,” he said.

WBNG TV reporter Erik Burling was on the scene during the incident. A Philadelphia native, Burling said he didn’t anticipate such an assignment. “I think Binghamton prides itself in that this is a great place to raise a family. There’s never anything like this in the news,” said Burling, whose home parish is St. Thomas of Villanova in Philadelphia.
During the incident, Burling relied on his training as a reporter to remain level-headed. “I was there as the situation was playing out, as it was unfolding. You’re just reacting at that point – your adrenaline is pumping,” he said. “You’re trying to gather facts, gather information, try and figure out what’s going on when no one knows what’s going on in a situation as it’s playing out. Just to see people being carried out on stretchers, you almost don’t believe it at first.”
Funeral services and Masses continued throughout last week in the Binghamton area. A memorial march to mark the one week anniversary of the shootings was was held Friday, April 10.

Shortly after the incident, Catholic Charities of Broome County established a fund for the families of the victims. On April 7, a benefit for the victims’ families was held at the Oakdale Mall in Binghamton.