‘Showers of Hope’ in Binghamton forecast 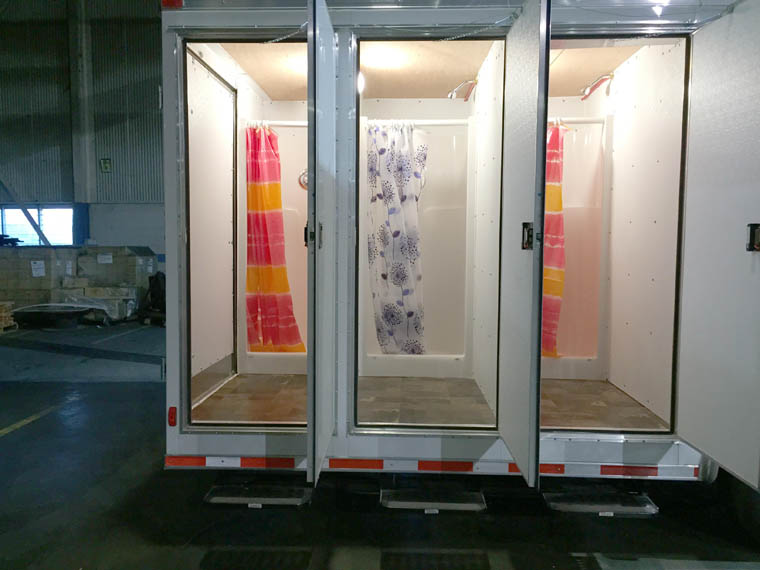 BINGHAMTON — Alongside the Susquehanna River, tucked underneath a bridge, people make their home. St. Patrick’s parishioner Barbara Donnelly has walked down a path to see where they live in cardboard “houses” just a short distance from the city’s downtown.

For the last year or so, Donnelly and others from the parish have been making connections with the homeless. It’s in advance of a program that’s unique to the area called “Showers of Hope.”

A portable trailer with four private showers is expected to take to the streets next month.

“A lot of areas needed showers,” Donnelly said. “Either they knew someone who needed them or they needed them.”

“We realized they’re not just going to come take a shower until we befriend them.

So in January we started going out and giving out hot chocolate, coffee and soup,” Donnelly said.

When the showers begin service by July, Donnelly doesn’t expect a big turnout. That’s mainly because in the warm weather some of the homeless bathe in the river.

Msgr. John Putano, pastor of St. Patrick’s, suggested the shower trailer last year at a parish council meeting. He drew inspiration from the Vatican, where Pope Francis opened showers to the homeless. Msgr. Putano suggested it was a good idea to start in the Year of Mercy. He’d heard of similar programs elsewhere. He said they’re in the process of forming a 501(c)(3) organization for the project.

“It’s still kind of in the beginning,” Msgr. Putano said. “There’s a definite need for this in the community.”

While the first visits of the mobile-showers trailer will be at St. Patrick’s, there’s also interest in bringing it to other places, including St. Ambrose in Endicott. Eventually it could go to any place in the county where it’s needed.

City of Binghamton Mayor Richard David and Broome County Executive Jason Garner have reached out to help. Support has spread quickly among parishes, other churches, and the community.

Donnelly said offers have come for a mobile medical unit, a podiatrist, caseworkers, and hairdressers to accompany the showers.

“And Bates Troy [Healthcare Linen Services] is really being good to us.  They’re going to do our towels for a real minimal cost and let us use their towels. So we don’t have the expense of having them laundered to the way they have to be  — hospital criteria,” said Donnelly

“It’s pretty cool, really,” Donnelly noted, pointing to a picture of the trailer on her smartphone.

The unit will also have laundry facilities.  It carries hot water tanks and propane for heating. There’s air conditioning, too.  Water comes from a garden hose, and there’s a simple electric hookup. During the floods of recent years, FEMA brought in similar portable showers for use in the community.

There’s been a lot of fundraising in the last few months to pay for the trailer. A concert by pianist and retired Binghamton Symphony conductor John Covelli started off the year. There have been fish dinners during Lent. French toast breakfasts were served by young people and other projects are still to come.

The Homeless Coalition and the YWCA are on board to assist with those who will use the showers. Several parishes have discussed helping out as well. But when it comes down to the operation of the shower trailer, there’s going to be a need for a list of perhaps 15-20 to help each day.

“We really want this to be a community,” said St. Patrick’s parishioner Marianna Diehl. “We just want to bring everybody into it. We want ‘Showers of Hope’ for the community.”

“I’m just amazed at how people want to be doing this. I think when we get this out, people are going to want to help out,” Donnelly added.