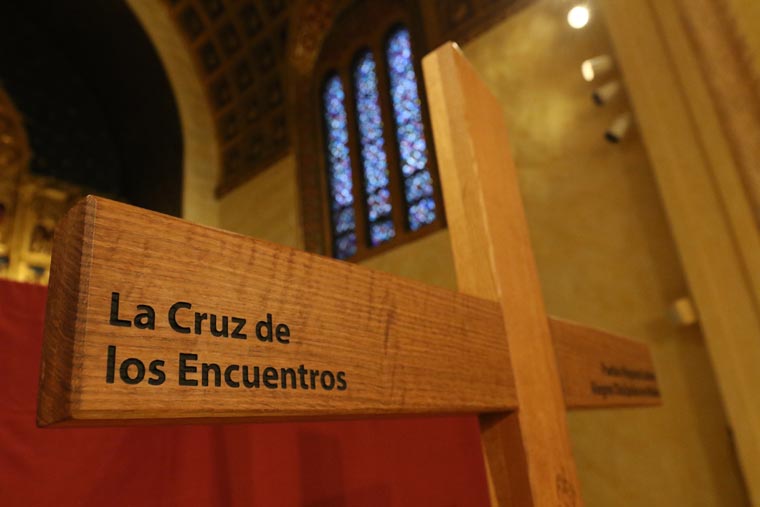 COLUMBIA, S.C. (CNS) — With evangelization as its primary objective, a diocesan gathering of Hispanic Catholics turned to a landmark document from Pope Francis as the blueprint for its efforts.

Part of Encuentro, a four-year process of meetings and gatherings aimed at figuring out the needs of Latino Catholics in the U.S., the gathering Aug. 12 at Cardinal Newman School centered on the vision Pope Francis presented in his 2013 apostolic exhortation, “Evangelii Gaudium” (“The Joy of the Gospel”).

“The team that put together the Encuentro this time out have really taken (Evangelii Gaudium) up as the structure,” said Michael Martocchio, director of Catechesis and Christian Initiation for the Diocese of Charleston. “It’s an important part of just how we’re supposed to do this evangelizing and how we’re supposed to reach out to people on the peripheries. It’s more than where we just simply do something nice for someone and walk away.”

The diocesan event was the latest step in the four-year process. After completing a series of small-group meetings at South Carolina parishes, participants came together for an all-day session to share their experiences and address local needs and desires. Church officials planned to begin implementing a diocesan action plan based on the information provided.

Delegates from the diocesan events will attend a regional Encuentro in February in Orlando, Florida. The national Encuentro will take place in Dallas in September 2018.

At the conclusion of the national Encuentro, the information from the regional events will be reviewed by church officials and incorporated into a national plan for Hispanic ministry. It is scheduled for publication in 2019.

Much of the theme for the Encuentro, “Missionary Disciples: Witnesses of God’s Love,” revolved around the five steps cited in Evangelii Gaudium: “Taking the first step, being involved and supportive, bearing fruit and rejoicing.”

Father Teofilo Trujillo, diocesan vicar for Hispanic ministry, led the rejoicing during a Mass celebrated in three languages. His homily emphasized the importance of discipleship as an ongoing commitment, an integral part of evangelization.

Father Trujillo, pastor of St. Mary Magdalene Church in Simpsonville, South Carolina, added, quoting the pope’s exhortation, “Of course, all of us are called to mature in our work as evangelizers. As Pope Francis says, ‘We want to have better training, a deepening love, and a clearer witness to the Gospel. In this sense, we ought to let others be constantly evangelizing us.’”

The Encuentro website describes “the main objective of the process of the Encuentro is to discern the way in which Hispanics/Latinos respond as church.” Part of achieving that objective is seeking ways to integrate the many cultures of the ever-growing Hispanic/Latino community in the U.S. into the liturgy.

Mass began with a step in that direction, opening with a traditional Guatemalan dance ritual. The Guatemalan people are Spanish-speaking, but the roots of their culture trace back to the ancient Mayan tribes with 23 different dialects.

“I loved (the dance ritual). I had goosebumps,” said Joely Leguizamon, a participant and group leader at St. Mary Help of Christians in Aiken, South Carolina, who was born in Nicaragua and lived in Guatemala for 14 years. “You just felt this sense of belonging and pride. Even if you’re not a part of that culture you appreciate moments like that.”

Members of three Mayan tribes — Kanjobal, Akatek and Chuj — participated in the Mass, which also included songs and petitions in their native dialects.

“(Hispanics and Latinos) speak Spanish as a common language, but that doesn’t mean we have the same culture,” said Gustavo Valdez, diocesan director of Hispanic ministry.

“The church as a Catholic community welcomes all Hispanic diversity, people with different backgrounds, languages and cultures. Even when I don’t understand what they are saying because I don’t understand the dialects, to me, the fact that they show who they are, they’re showing a different face of Jesus among us. In the end, we all have the same faith. That’s the beauty of being part of the Catholic Church.”