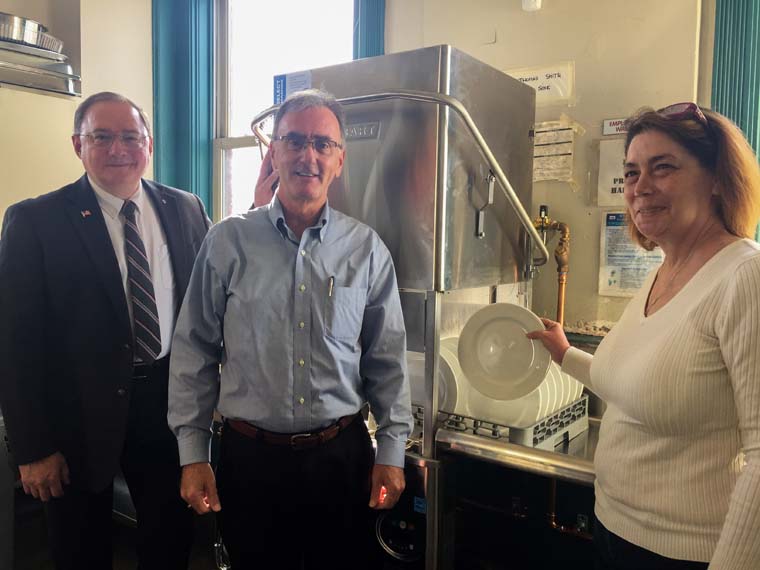 UTICA — Thanks to the inspiration from a visit to the original gravesite of St. Marianne Cope in Molokai, Hawaii, Mother Marianne’s Westside Kitchen has installed a $17,000 commercial dishwashing system at its St. Joseph’s and St. Patrick’s Church location in West Utica, according to Vicki Montalbano, the Kitchen’s director.

Funding was spearheaded by Jerome Donovan of New Hartford through the Senator James H. Donovan Memorial Fund and supported by the Mele Family Fund; Joseph Flihan Sr., owner of Joseph Flihan Company, a food service equipment distributor in Utica; and the Utica Council 189 of the Knights of Columbus. The Donovan and Mele Funds are donor advised funds administered by the Community Foundation of Herkimer and Oneida Counties, Inc.

Montalbano said the installation will enable the Kitchen to use regular dishware rather than Styrofoam. Using Styrofoam was expensive and not environmentally friendly, she said. “We wanted to install a dish washing system for quite some time but simply didn’t have the resources.”

After a visit to Hawaii last spring, Donovan said he was inspired to do something in Mother Marianne’s honor leading him to the Kitchen to inquire into unmet needs. Donovan said his father, the late state Senator James H. Donovan, lived in West Utica during his grade school years and delivered newspapers throughout the area. Supporting the good works of the Kitchen and its 125 dedicated volunteers — who have served more than 500,000 meals since opening in 2008 — seemed the right thing to do and a way to continue his father’s legacy of supporting the less fortunate through the memorial fund, he said.

After learning of the need of a commercial dishwashing system, Donovan enlisted the support of his neighbor and owner of Joseph Flihan Company, Joseph Flihan Sr., who provided a cost estimate and offered to fund a portion of the project. Donovan then contacted Lindsey Costello, Program Officer at the Community Foundation, who enlisted the support of the Mele Family Fund. Still short of the goal, Donovan, a member of Knights of Columbus Council 189, reached out to the Council, which helped fully fund the project.

Donovan said this collaborative effort was made possible by the commitment and generosity of individuals and organizations who understand the importance of the work of the Westside Kitchen in providing a nourishing meal to those who might otherwise go without.