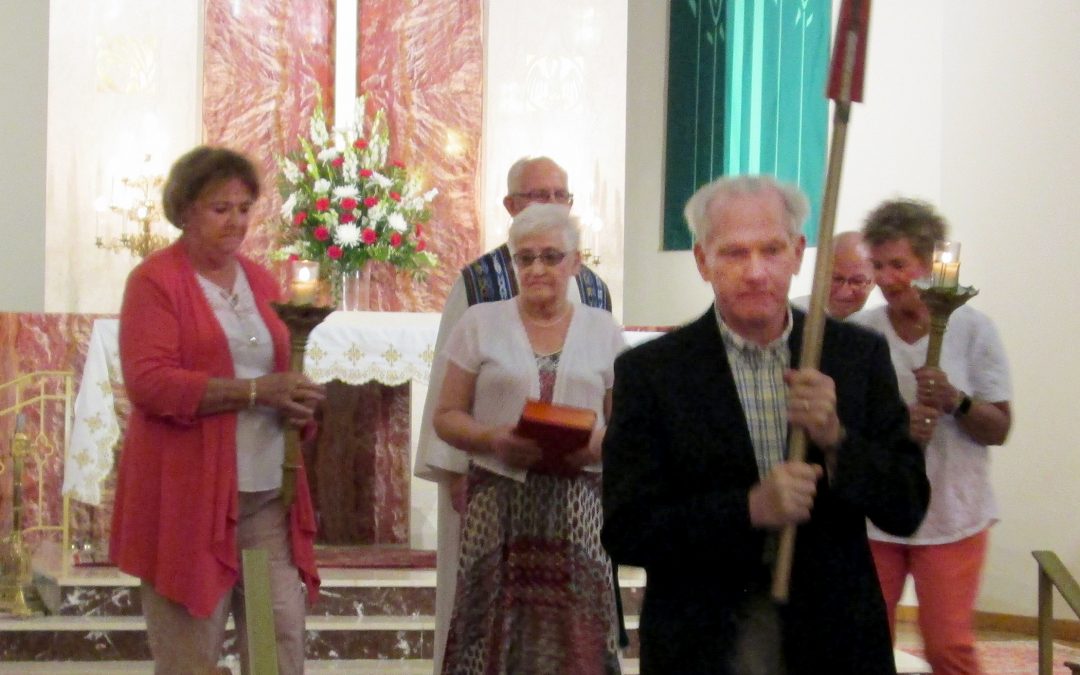 St. Vincent de Paul parish has a long history — the cornerstone was laid in November 1895 — at its Hawley Avenue–Vine Street–Burnet Avenue location in Syracuse. On Aug. 19, after months of preparation, the parish held an all-time celebration of students, staff, families, alumni, friends, and neighbors.

Prior to Mass there was a school tour, conducted by Carl M. Oropallo, ’58. The participants remarked on how the building’s uses have changed but they still remembered where they attended French class, typing class, and homerooms; the names of our teachers; and other aspects of our history at our alma mater.

Michael Lavelle, graduate of the last St. Vincent de Paul High School class of 1970, gave a welcome message before Mass. He was the chairman of the Reunion Committee until a stroke he suffered in May interrupted these duties. Anne Egan Kolozsvary, also ’70, assumed the leadership of the group, which entailed all facets of the tasks at hand.

The present pastor, Father John F. Rose, celebrated the 4 p.m. Mass with Deacon Michael Colabufo, who gave the homily. Deacon Michael grew up a few blocks from the school/church but did not attend as a student. More than 200 people attended and various former students and alumni participated in this Mass: The cross bearer was the president of the class of 1961, John Iwanski; the MC was Oropallo.

At the offertory, the gifts were presented by class of 1957’s Virginia Dufore Cox and Robert Connelly, who were both celebrating their 60th reunion. Paul Roach, ’48, brought his yearbook; Janice Vuillemot, ’68, carried the 1959-60 basketball championship trophy; and her sister Theresa Vuillemot, ’73, carried a red “V” letter.  A framed photographic collage of the church and school, designed and donated by Robert Bills, spouse of 1970 graduate Jean Corrigan Bills, was displayed and then raffled off during the dinner at Bella Domani Catering & Banquets in North Syracuse.

Eucharist ministers were Chase and Drury. After Communion, everyone’s candles were lit and the congregation stood to sing the alma mater, written by 1939 graduate Mary Jane Kennedy Hamilton, who was unable to attend. This is what we have in common: the spirit of St. Vincent’s that Lavelle spoke about in his welcoming remarks. While he was in the hospital and rehab after his stroke, he had many friends and parishioners visit and send cards and well wishes to him. The various medical staffs marveled that such a group of people were so caring and friendly.

The final event of this day was a buffet dinner at Bella Domani. About 120 attended. They came from far and near: Texas, Minnesota, Florida, Maryland, Pennsylvania, Georgia, Onondaga County, Oswego, Marathon, New Jersey, Connecticut, Interlaken, and Lake Clear, N.Y. Father Rose gave a blessing before dinner and we enjoyed a wonderful meal together.

The raffle was won by Bill Spaulding. Memorabilia was brought and displayed on a special table for attendees to peruse all our newspaper clippings, yearbooks, programs, and photos. We renewed acquaintances, not only from our respective classes, but also our schoolmates, since there were many families that attended over the 40-plus years of its existence and everyone in the school and church knew almost everyone else.

We happily spent several hours reminiscing about our school and church days.

I attended St. V’s from kindergarten through 12th grade and lived steps from the church. Younger siblings, aunts and uncles next door, and my father all went to school here. Most of the neighbors also attended; almost everyone walked to school, and religion was the core of our education.

The cornerstone was laid by Bishop Patrick A. Ludden. The first Mass was held in the church basement in July 1906 until the rest of the Gothic structure was completed. The first pastor and celebrant was Father William F. Dougherty, who was born in Oswego in 1864. He oversaw the construction of the church, rectory, school, and convent. Father Dougherty served St. Vincent’s for 50 of his 55 years in the priesthood (1894 until his death in 1944). A special plaque displayed in the church vestibule was unharmed during the church fire in December 1955.

Masses were held in the school gym for the next two years until the Rededication in 1957. There was a 50th Rededication celebration in the parish in 2007, concelebrated by Bishop Thomas J. Costello, who recounted the collaboration between the pastor, Msgr. David C. Gildea, and the diocesan office, to rebuild the church after the fire.

The school was built as a tribute to Father Dougherty’s 25th Jubilee. The first classes, in October 1916 for grades one through four, were staffed by the Sisters of St. Joseph of Carondelet from Troy. In June 1921, the first eighth-grade class graduated and continued on to high schools, public or private, like Christian Brothers Academy. The total enrollment of those grades was 368 at that time. When Bishop John Grimes succeeded Bishop Ludden, he was given the tasks of having parochial schools built in the diocese. The high school was built in 1931 and by 1936, the total enrollment for kindergarten through 12th grade was 483.

St. Vincent High School and Grammar School both operated in the same building, which is used today as the parish center. It hosts St. Vincent de Paul Daycare, which started within a couple of years after the grammar school closed in ’86. Also, the parish has a large refugee population that uses the old school for its various occasions, both traditional and informal.

For about 15 years, Trinity Fellowship Church has rented the gym for services and some of the classrooms for Sunday school. St. Vincent parish projects in the old school include youth basketball and arts and crafts programs on Saturdays. Joseph’s House, a home for mothers facing unplanned pregnancies, uses the former convent for its offices.

These neighborhood parochial schools, along with the parochial basketball league and some other sports, were the norm up until 40 years ago. To get together to celebrate was a memory we all will cherish. We noted how much the world has changed over the last decades, but one thing is certain: The spirit of St. Vincent de Paul’s is on-going and vibrant.

Thank you to all who participated, attended, sent messages, and helped us along our journey to now.

Donna Massara Ruth is a parishioner of St. Vincent de Paul Church and a 1961 graduate of St. Vincent School. She served as the database manager on the Reunion Committee.

Carl M. Oropallo contributed to this report. He is president of St. Vincent de Paul Daycare and coordinator of the refugee program at St. Vincent’s.