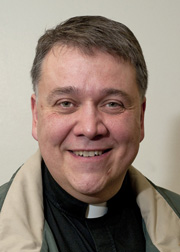 Message from the Director of Seminarian Formation

Sometimes I get a funny look when I tell people that I work in the Vocation Office in the Diocese. With the funny look comes the response, “But I thought Father Joe O’Connor did that.” And it is true, Father O’Connor indeed works in vocations, but on the promotions’ side of the equation. He’s the one out there encouraging those who are discerning a possible call to the priesthood or religious life.

For me, however, I am more in the background, doing some of the other work. You see, when Father O’Connor has someone ready to apply to the seminary, he passes that prospect on to me, and I take the prospect from there, walking the applicant through the application process and, should we accept the applicant, walk with the seminarian on his hopeful journey to priesthood.

First, the application process. In many ways, the process is a discernment tool.  Applicants are required to submit a rather lengthy autobiography. We also walk the applicant through several hours of psychological testing. Security clearances (including the one connected with VIRTUS Training) are executed, along with a series of interviews, a full medical exam, and we look at the applicant’s academic records. Several references also are submitted. Through all of this, we aren’t putting an inordinate amount of weight on any single aspect of the application, but instead we are trying to learn as much as possible about this individual, and whether there are enough signs which would lead us to the same suspicion that the individual has — that maybe God is calling this person to the priesthood. This is an important piece — the potential seminarian (and potential priest) cannot discern this call in a vacuum. We, as a church, are challenged to discern that call beside him. This is why honesty and trust are so paramount throughout the process.

Should we accept an applicant, we then move on to having the applicant apply to a seminary. For those at the college level, we use St. John Neumann College Seminary in New York, where seminarians live in a house of formation and attend classes either at St. John’s University or Fordham University. Major (graduate level) seminaries used by the Diocese include Blessed John XXIII Seminary (outside of Boston), Theological College in Washington, D.C. and St. Mary’s Seminary and University in Baltimore.  Each of these seminaries has its unique gifts, but they all hold in common a very good reputation for their formation work.

Once the individual is accepted in the seminary, it is then my job to keep an eye on him, coordinate various formation needs (including pastoral years) as formation ensues, as well as act as a liaison between the Diocese, the seminary and the seminarian. This frequently involves a fair amount of phone work and paperwork, but it also involves visiting the seminarians at their respective seminaries about halfway through each semester. These are always challenging visits, meeting individually with each seminarian, but it is also a very rewarding part of the job. Consistently, our seminarians are very highly regarded by faculty, staff and fellow seminarians. Our guys have an incredible impact on the seminaries where they attend. Thus, despite the demands of these visits, rarely do I have to play Darth Vader.

That, in many ways, is what I do as the Director of Seminarian Formation. It is a lot of behind-the-scenes legwork, with some of it done in the chancery, but most of it done in other venues  — including the parish where I’m assigned.

On the first Saturday of June, we typically celebrate the Rite of Ordination to the Priesthood. You’re always welcome to join us! During that Rite, I have to step up to a microphone and present those who are to be ordained. During that brief, yet ancient dialogue between the bishop and me, my role is to assure the bishop that the person is found worthy to be ordained. Be assured that a lot of work has gone on to allow me to give the bishop that assurance. Sure, there’s my part in the whole equation, but my work is relatively minor compared to the work that the seminarian does. Trust me, I see these guys working, and they’re working hard. But for me, I look forward to the day when I no longer have to be their supervisor and can simply be their brother. In many ways, on ordination day, I can also say, “The Eagle has landed.”

In addition to his role as Director of Seminarian Formation, Father Servatius is administrator of St. Augustine’s Parish in Baldwinsville.