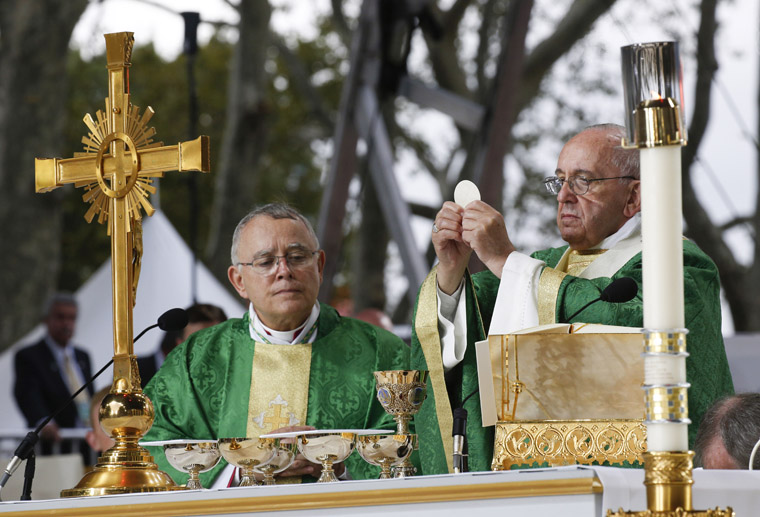 A little bit of Syracuse, in the form of altar candles, lit the way for Pope Francis to celebrate Mass at five churches in Philadelphia, New York City and Washington D.C., during his recent visit to the U.S. The candles were specially crafted for the pope by the Cathedral Candle Company, a 118-year old Syracuse-based company.

“We were honored to provide the candles as a gift to the Holy Father,” stated Mark Steigerwald, vice president of the family-run company and great-grandson of its founder, Jacob Steigerwald.

The candles were present in Washington D.C., at the Mass for U.S. bishops at St. Matthew’s Cathedral; at the Canonization Mass of Junipero Serra on Sept. 23; at evening vespers at St. Patrick’s Cathedral in New York City on Sept. 24; in Philadelphia at the Mass at the Cathedral Basilica of Saints Peter and Paul on Sept. 26; and at the Mass to celebrate the conclusion of the World Meeting of Families on Sept. 27.

The concept of creating candles for the pontiff was an effort 18 months in the making.

“We’re known for our work and we reached out to our distributors, offering to help,” stated Steigerwald.

The company has been crafting candles for churches since 1897. For the pope, the company created a total of 42 candles, ranging in length from 12 to 36 inches. The candles were made from 51 percent beeswax and were a mix of plain white and specially decorated candles that featured the pope’s coat of arms, a silver and gold woven band, and the date, location and occasion of each Mass.

This is not the first time the company produced candles for use by a visiting pope. The company also crafted candles for St. John Paul II and Pope Benedict XVI when they visited the U.S.

The Cathedral Candle Company crafts and distributes candles to churches throughout North America. The fifth-generation company employs 70 people, most of whom live within walking distance of the company’s headquarters on Kirkpatrick Street.

“It’s been an exciting time for our employees,” stated Steigerwald. “Every time someone saw the candles on TV, you could hear the buzz amongst the employees. Everyone felt a part of this project and there were a lot of hands on this project and a lot of eyes checking things over before we shipped the candles out. Overall, it was a team effort and we were thrilled, honored and humbled to have participated in this event.”