Syriac patriarch in Detroit: 'We are begging' West to help refugees 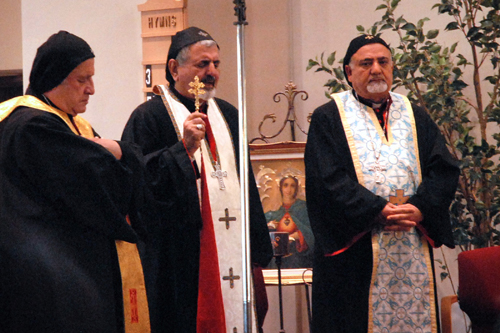 With Iraqi and Syrian Christians escaping the terror inflicted by radical Islamic extremists, Syriac Patriarch Ignatius Joseph III Younan made a plea to Western Christians to save his people, his culture and his homeland during a pastoral visit to the Detroit area Sept. 19-21.

The spiritual leader of the world’s 158,000 Syriac Catholics spoke at St. Toma Syriac Catholic Church in Farmington Hills Sept. 21, briefing the congregation on the situation in the Middle East and what needs to be done to save thousands of Christians in the region.

“The situation is very devastating and tragic,” Patriarch Younan said, speaking in both English and Arabic. “For Iraq, this has been happening for two generations. For Syria, the war has been taking place for the last three years, with no hope on the horizon for Christians in the area.”

Patriarch Younan spoke before media members and the St. Toma congregation following celebration of the Divine Liturgy — what Eastern Catholics call the Mass — describing the atrocities taking place at the hands of the Islamic State, including the destruction of churches, the trafficking of women and girls as sex slaves, and the forced conversion of Christians to Islam.

“The crisis is evolving into more killings, more hostages and a struggle with no end in sight,” said Patriarch Younan, who was elected as patriarch in 2009 after serving as the first eparch of the Newark, New Jersey-based Syrian Catholic Eparchy of Our Lady of Deliverance. “We’ve been through these struggles for 14 months, since the fall of Mosul on June 10, 2014. Since then, all the Christian communities in northern Iraq have been wiped out.”

With the destruction of their ancestral homeland and faith, thousands of Iraqis and Syrians have reluctantly left their homes for neighboring Arabic states and Europe, forced to live as refugees.

Patriarch Younan believes the rise of the Islamic State is a direct result of the fall of Saddam Hussein’s Ba’ath regime in Iraq in 2003 and the current opposition to President Bashar Assad’s Ba’ath government in Syria, actions that have been encouraged by Western countries.

“The flow of immigrants is a very direct result of the politics taken by Westerners,” Patriarch Younan said. “These nations must accept refugees. Surely, refuges are not the best way to solve the crisis. But if the world believes in freedom of movement and the right of immigration, then these countries must welcome the refugees from policies they helped create.”

Pope Francis also spoke in direct terms to the U.S. Congress Sept. 24, encouraging aid for people fleeing such violence. Before his visit to the United States, Pope Francis offered the Vatican as a home for refugees.

Patriarch Younan said Syrian and Iraqi Christians don’t want to leave their land, but do so out of fear of Islamic State militants. He said the solution is for Western powers to use their economic, political and even military strength to stop ISIS and promote stable governments in the Middle East that protect the rights of religious minorities.

“We are begging the West to stand for the rights of all citizens in Iraq and Syria,” Patriarch Younan said. “The West can’t be just about introducing democracy when you have a majority of Muslims who don’t want a separation of church and state.”

The patriarch explained radical Islam must be eradicated and a clear definition of the role of church and state must be established before Middle Eastern states can establish democratic republics.

“The idea that democracy will bring in stability is a fantasy,” Patriarch Younan said. “Stability will only happen in the region when there is a government strong enough to protect the rights of everybody and not simply for the majority.”

Patriarch Younan finished his address by appealing to Westerners to save Christianity in the Middle East.

“The Middle East is the cradle of civilization, and Christians have been at the center of the civilization for millennia,” Patriarch Younan said. “We’re going against all the odds. We don’t have the numbers, we don’t have the oil and we don’t have the terrorists that Muslims seem to inspire. But we do have our faith and the hope our Western Christian brothers and sisters will come to our aid.”

Meloy writes for The Michigan Catholic, newspaper of the Archdiocese of Detroit.