The choice for God: Diocese of Syracuse priest says ‘goodbye’ to Mother Angelica 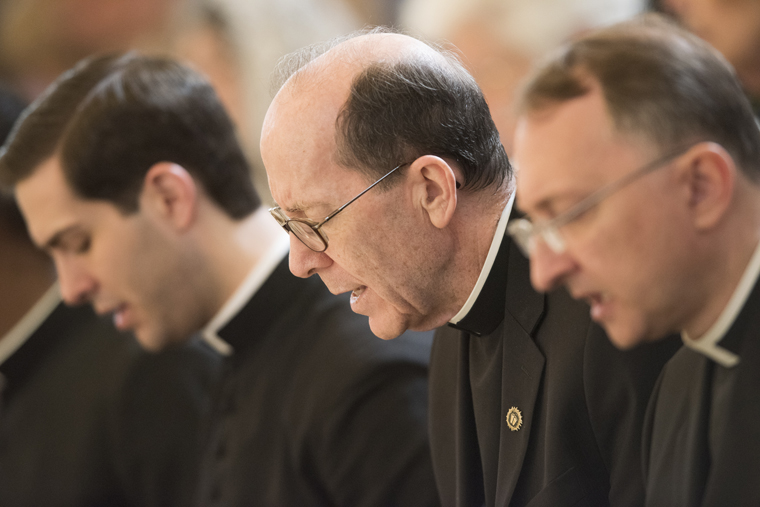 Editor’s note: The Syracuse Diocese’s Father Christopher Seibt was asked to be among the priests assisting at the final ceremonies for Mother Angelica, the Poor Clare of Perpetual Adoration who founded the Eternal Word Television Network. Mother Angelica died on Easter Sunday at 92. Father Seibt shares his reflections on the experience here.

As I was driving from visiting with my family in Syracuse back to my parish — Sts. John and Andrew — in Binghamton on Easter Sunday night, my cell phone rang. It was Father Michael Weston, the director of liturgy at the Basilica of the National Shrine of the Immaculate Conception. When I was assigned to the National Shrine as a seminarian, one of my responsibilities was to assist him as a master of ceremonies. Father Weston called to inform me that Mother Angelica had passed away and to ask me if I would join him and two other priests in helping EWTN and the Shrine of the Most Blessed Sacrament in Hanceville, Ala., with the final ceremonies for her, particularly with the Mass of Christian Burial and the Rite of Committal.

After checking with my pastor, Msgr. Michael Meagher, I said yes and made the necessary arrangements to go and do the job I was asked to do, thinking very little about the significance of what was to take place.

When I arrived at the Shrine, Mother Angelica’s body was lying in state and there was a constant line of people waiting to pay their respects, ask for her prayers, and even place their religious articles in her hands, hoping for future miracles.

As my mind was focused on the task at hand, I settled in and began to help with some of the preparations for Mother’s funeral Mass. With regard to the funeral liturgy itself, I was asked to train various ministers, oversee some of the particulars, and direct the priest concelebrants.

I attended Vespers (Evening Prayer) and the Vigil for the Deceased the night before her funeral. During these ceremonies I began to realize that I was in the presence of the body of a saintly woman, one who perhaps may be declared by the Church to be a saint someday.

As we prayed for Mother Angelica, I became more aware of the fact that this experience was an historical moment. I thought of the many people, including myself, who were strengthened in their faith, hope, and love of God because of the efforts this faithful, passionate, and joy-filled woman religious. Consequently, my experience of serving as a master of ceremonies for her funeral began to be transformed from a task-oriented one to a deeply spiritual one.

The homilies that were preached, the comments that were made, and the stories that were told all recounted the valiant efforts of Mother Angelica — how she entered the monastery, founded EWTN during a time of turmoil in the Church to promote prayer and to clearly present what it is that we profess and believe, built the Shrine of the Most Blessed Sacrament to give honor and glory to God and to foster devotion to the Holy Eucharist, and so on. It was clear that what she accomplished was beyond mere human capabilities. Some people even shared the fact that Mother had a bit of a temper and could be somewhat impatient, and that her theology sometimes needed a bit of nuancing and refinement. It was clear that she was human. Moreover, people shared how she personally touched their lives by bringing them closer to God and giving them hope. It was clear that she was a person of deep faith and prayer who cared about the souls of others.

All of this deepened my awareness of the impact that her life has had on so many people. Yet, what struck me the most is what Father Miguel Marie Soeherman, MFVA, the priest who preached the homily at the vigil, shared. He said that Mother did not die in her sleep, nor did she want to. All her life she strived to make the choice for God and at the moment of her death she wanted to be awake so that she could make that choice one last time. It was clear to me then that, above all, Mother Angelica was a person who feared the Lord — in the positive sense of the word — because she loved him ardently. Thus, she spent her life striving to trust in him completely so that she would always do his will.

There is so much more that can be said about Mother’s life. Of all the commentaries that have been written upon news of her death, I find Bishop Robert Barron’s to be the most insightful one. It is called “The Spiritual Legacy of Mother Angelica.”

Assisting at the funeral rites that helped the world to say “goodbye” to this very holy and remarkable woman religious was an undeserved honor for me. I did not know her personally. Nevertheless, her life and example inspired me and saying goodbye to her reminded me of this simple, yet profound, reality concerning the spiritual life: We all have a choice to make. Through her efforts, prayers, and suffering Mother Angelica encouraged and helped many people to make the choice for God — and now that she is with God I am sure that she will continue to do so. Eternal rest grant unto her, O Lord. And let perpetual light shine upon her.

May she rest in peace. Amen.

Father Christopher Seibt is parochial vicar of the Church of Sts. John and Andrew in Binghamton.