The priest who made good friends everywhere 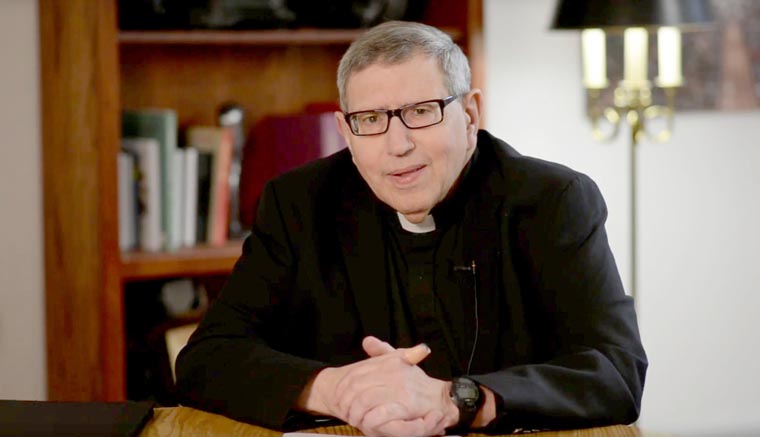 Father Vavonese retires — sort of — with gratitude and humility

As a high school student, Father Charles S. Vavonese performed big numbers with a lot of choreography and great singing in the chorus for the Pompeian Players’ “almost professional” Broadway shows.

“The Pompeian Players were upbeat … uplifted,” he said. “You made friends, you had a good time, you did something together — it was accomplishing something. It made my high school years memorable and kept me close to the Church.”

In the 44 years since his ordination, he said, not much has changed in his approach to life:

“Just a different opportunity to play it out. … I’ve played a number of roles.”

He went from chorus member in his early days to director — of various ministries. This month the educator, world traveler, and fluent speaker of Italian retires from his responsibilities as the director of Formation for Ministry in addition to his role in Lay Ministry. Father Vavonese also oversaw the Office of Public Policy and the Ministry to Persons with Disabilities, and he served for many years as associate superintendent of Catholic schools. At the state level, he served on several education committees representing New York Catholic schools.

To every one of those ministries, which included parish duties, he brought the mystique of a Pompeian Player: Keep it friendly, make it exciting, and leave them smiling.

A talent for teaching

“I always had a good feeling about what it was that I did,” he said recently in his office in the chancery. “I’m very fortunate to be in the Diocese of Syracuse. … It was great being with people, and helping them to walk their journey. And also permitting them to help me walk my journey.”

He grew up in Syracuse, where as a member of a “very Catholic” family he was very active in his home parish of Our Lady of Pompei. “They had a terrific youth group,” he said, “and a very charismatic priest who served as my role model: Msgr. Charles Borgognoni,” who was the director of the Pompeian Players.

When he was a senior in high school, Father Vavonese was already teaching religion to elementary students. He continued as a religious-ed teacher when he attended Loyola University in Chicago. In a 48-minute interview, Father Vavonese used the words “gift” or “gifts” at least six times. He remains in awe of the gift of teaching that God gave him; it rivals the wonder that he still feels about concelebrating his first Mass.

“I also had an amazing mentor at Fordham University,” he said. “Dr. Elinor Ford, who was one of the most creative professors I’ve ever had. She approached the gospel with all kinds of enthusiasm and with a great deal of professional competence.” She taught him not only to do a ministry, but also to “bring a sense of excitement to it.”

“I had some great opportunities,” he said, “and because of those opportunities, I was able to approach my jobs in a different manner. I also was part of the group that worked with Le Moyne College to institute the educational leadership program, and for a period of time I taught in that program. So again, it was an opportunity to use the education that I’ve been blessed with.”

His extensive education and his early background in theater gave him an ease in dealing with school principals, colleagues, and parishioners.

“I liked people,” he said. “I really enjoyed working with people, helping people, journeying with them. Some people don’t work with others very easily. I really enjoyed doing it. It’s not a task for me. … My whole thought is: What can I do for them? How can I make whatever it is that they’re working on easier for them?”

For example, he mentioned a person whom he is training for lay ministry.

He told the Formation for Ministry candidate: “‘OK, if you’re going to have a grieving ministry, here are some materials that you can think about. And here’s a place that already has a grieving ministry; why don’t you [contact] them, find out what they do, and then decide what it is you’d like to do.’ So it’s kind of like the coach. It’s a different kind of teaching. … So it gives me an opportunity not to actually do all the ministries, but to enable others to do the ministries.”

Reflecting on his years of service, Father Vavonese said, “Because there is so much teaching in ministry, I was especially fortunate that our diocese was so invested in Catholic education.  It gave me an opportunity to live out my vocation within a vocation.”

Fulfilling both of those vocations, he served as administrator and teacher of Italian, social studies, and religion at the former Bishop Cunningham High School in Oswego for six years. “There isn’t any place that I’ve been that I didn’t make good friends,” Father Vavonese said. For example, he recently baptized the grandchild of Patty and Mark Slosek; Patty taught French at Bishop Cunningham.

Father Vavonese remembers the time when there were 35 priests in the Catholic schools. In 1975, he said, Bishop Cunningham High School had four full-time priests, one part-time priest, and eight nuns for about 450 students.

“When I was teaching,” he recalled, “and kids … found an insight, particularly an insight about Christ or the Church, I always kind of said: Yeah! You did it. You helped them get there.”

Instructor on the bus

“I came to appreciate his knowledge of school law,” said Msgr. Elmer, who was ordained with Father Vavonese and five other men on May 12, 1973. “I mean state and federal regulations and he really knew that stuff; he knew handbooks, he could write ’em. … Very good on anything related to schools, and the rules and regulations. … He was an excellent teacher, too.”

When he moved into the Formation for Ministry office, Father Vavonese “made improvements to that,” the monsignor recalled. He cited online courses, which made it easier for people who couldn’t make all the class times.

As the leader of public policy for the diocese, Msgr. Elmer said, Father Vavonese used to organize trips to Albany to lobby the lawmakers on matters of Catholic interest, such as tax credits for Catholic schools.

“I remember he talked to us on the bus,” Msgr. Elmer said. “He’d kind of instruct us on the bus and give us a little video — what we were supposed to say and talk about with these legislators; what was the Catholic position?”

“Father Vavonese is one of those individuals that you equate with the good work of the diocese. He’s been here [in the chancery] 33 years, and he’s ranged his ministry from schools to education to public policy to disabilities to formation for ministry, and served as a pastor, and has said Masses in other churches throughout the diocese. He’s a gift, a treasure, and, boy, will he be missed.”

There’s something about Italy

“Well,” Father Vavonese said, “the diocese is not necessarily losing me.” He will continue to help out at Holy Cross Church in DeWitt, where he has been helping since 1998. And a couple of people have engaged him in conversation about doing a little ad hoc work in the diocese.

He has visited his beloved Italy a number of times; he witnessed the canonization of St. Marianne Cope in 2012. In September, Father Peter Tassini, Jr. and he will lead a group on a pilgrimage to Rome, Venice, Florence, and Padua.

In his retirement, Father Vavonese is debating getting a Labradoodle, a cross between a Labrador retriever and a poodle. For a dozen years he had a black Labrador named Bella (“that’s Italian for ‘beautiful’”). Bella got along great with the spaniel owned by Msgr. J. Robert Yeazel, who recently retired as pastor of Holy Cross.

Years ago in the rite of ordination, Father Vavonese lay prostrate on the marble floor. He rose up and journeyed far, with emotion and gratitude. It was suggested to him that when Bishop David F. Cunningham ordained him, he stepped into an ideal world for his talent and his inclinations.

“For me,” he said, “it was perfect. For me it was absolutely perfect.”