What is Pope Francis' schedule? 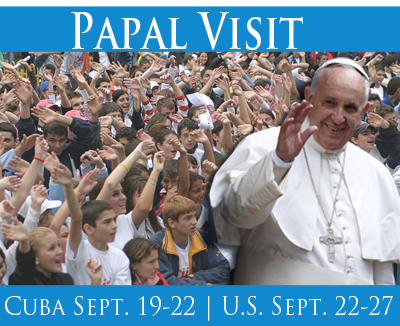 Pope Francis has a packed schedule for his apostolic visit to Cuba and the U.S. September 19 to 27. Find all the details below.

Tuesday, Sept. 22: El Cobre, Santiago de Cuba, Washington
• 8 a.m.: Mass in the Minor Basilica of the Shrine of Our Lady of Charity of El Cobre. Homily by pope.
• 11 a.m.: Meeting with families in the Cathedral of Our Lady of Assumption in Santiago de Cuba. Speech by pope. Blessing of the city from the outside of the cathedral.
• 2:15 p.m.: Farewell ceremony at Santiago de Cuba’s International Airport.
• 12:30 p.m.: Departure for Washington.
• 4 p.m.: Arrival at Andrews Air Force Base. Official welcome.

Wednesday, Sept. 23: Washington, DC
• 9:15 a.m.: Welcoming ceremony on the South Lawn of the White House. Speech by pope, followed by a courtesy visit with Obama.
• 11 a.m.: Papal parade along the Ellipse and the National Mall.
• 11:30 a.m.: Midday prayer with U.S. bishops in the Cathedral of St. Matthew the Apostle. Speech by pope.
• 4:15 p.m.: Mass and canonization of Blessed Junipero Serra in the Basilica of the National Shrine of the Immaculate Conception. Homily by pope.