When times are tough, rant at God, don’t run from trouble, pope says 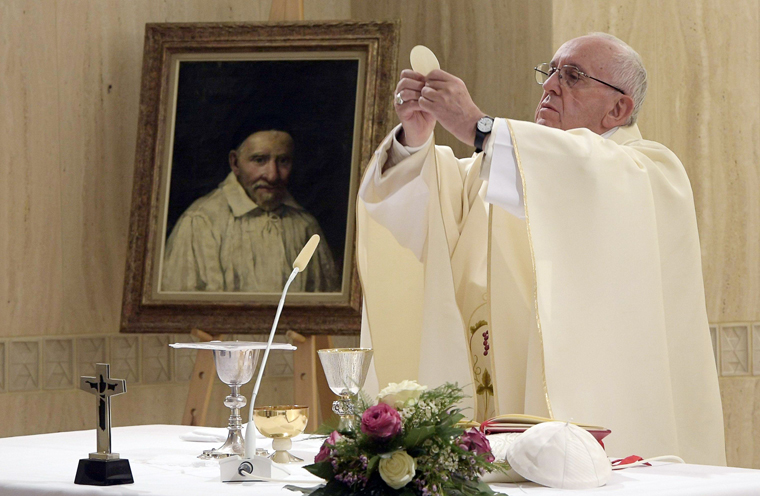 Figure out what is going on inside your heart, then turn to God and beg him for help, he said Sept. 27 during an early morning Mass in the chapel of the Domus Sanctae Marthae.

Reflecting on the day’s readings, the pope looked at the “spiritual desolation” experience by Job and the responsorial psalm, “Let my prayer come before you, Lord.”

Job lost everything and felt utterly abandoned and unfairly tormented, the pope said. He unleashed his desperate cries to God, venting all of his feelings of hopeless despair and regret, and yet, he never blasphemed or cursed God in his ranting, he said.

Everyone has experienced some degree of despair that “makes us feel as if our soul were crushed,” unable to breathe and perhaps even eager for death, the pope said.

“We have to understand when our spirit is in this state of extended sadness, where there is almost no air. This happens to all of us” to some degree, he said.

Some people might “take a sleeping pill,” avoid facing the situation or “have two, three, four shots” of something strong to drink; but that “doesn’t help,” he said.

So then what should people do when they go through “these dark moments because of a family tragedy, an illness, something that brings me down?” he asked.

In times of hopeless, spiritual despair, he said, the answer is to pray hard, just like Job, who cried out day and night for God to listen.

He said Psalm 88 and its response — “Let my prayer come before you, Lord” — “is a prayer of knocking at (God’s) door, but hard. ‘Lord my soul is surfeited with troubles and my life draws near to the nether world. I am numbered with those who go down into the pit; I am a man without strength.'”

This is praying with genuine candor and honesty, he said, because it is the way a child pours out his emotions to his father. And this is how “we must pray in the most terrible, darkest, most desolate, crushing moments.”

When someone is hurting and trapped in this spiritual despair, he said, the best thing to do is “talk as little as possible” because in these cases speeches “ultimately do not help and they can cause harm, too.”

A person can help with loving silence, “being close, a caress and prayers to the father.”

The pope asked that people pray for the grace to recognize and reflect upon the reasons for their despair, the grace to pray fervently to the Lord in times of trouble, and the grace to know how to best accompany those who are suffering, sad and despairing.