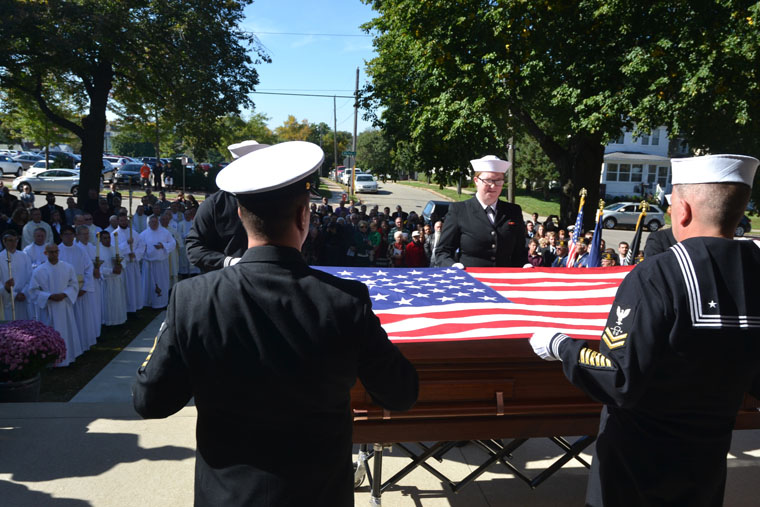 DUBUQUE, Iowa (CNS) — American flags whipped in the wind and people lined the nearby streets as the motorcade transporting the remains of Father Aloysius Schmitt, a World War II Navy chaplain, made its way to the Loras College campus in Dubuque.

Nearly 75 years after his death at Pearl Harbor, Father Schmitt was coming home to his alma mater to be laid to rest.

Father Schmitt, a native of St. Lucas and a 1932 graduate of Loras College, was the first U.S. chaplain killed during World War II. In September, the military announced that Father Schmitt’s remains had been identified and would be returned to Iowa.

Upon the formal reception of his remains at Loras Oct. 7, a vigil was held for Father Schmitt at Christ the King Chapel on the campus of the Catholic college. Dubuque Archbishop Michael O. Jackels led those who gathered at the midafternoon prayer service. Two other prayer services were held later that evening.

The following morning, Oct. 8, members of the Schmitt family, priests of the Archdiocese of Dubuque, veterans and representatives of the U.S. military, and members of the Loras College and Dubuque and St. Lucas communities came together at Christ the King for Father Schmitt’s funeral Mass.

After Jim Collins, Loras president, welcomed those who had gathered to “bring our hero home,” the students of the college’s choir sang a stirring rendition of what’s commonly referred to as the “Navy Hymn” — with lyrics asking God to “hear us when we cry to thee, for those in peril on the sea.”

In his homily that morning, Archbishop Jackels recounted the heroic actions taken by Father Schmitt Dec. 7, 1941, when the ship he was aboard, the USS Oklahoma, was hit by Japanese torpedoes and capsized. The priest sacrificed his own chance to escape the sinking ship and instead helped save 12 other men by pushing them through a small porthole to safety.

“Try to imagine the drive for self-preservation that automatically kicks in at such a time when life is threatened,” the archbishop said, “and then try to imagine what it would take to deny that impulse out of love for God, love for country, love for others.”

The archbishop stated that Father Schmitt gave his life for others in imitation of Christ who gave his life for all. One of the reasons, he said, that the chaplain’s remains were brought to Loras as a final resting place was the hope that it would inspire students to live their lives for others and serve as a reminder “that this is the way to live a happy life, a full life, here and in the hereafter — imitating Christ, imitating Father Al, who imitated Christ.”

Shortly before the consecration, Archbishop Jackels said the chalice he would be using that day had belonged to Father Schmitt and had been recovered from the wreckage of the USS Oklahoma.

Following the conclusion of Mass, Father Schmitt’s casket was brought outside to the front steps of the chapel for full military honors. A rifle salute of seven volleys was fired, followed by the playing of taps by a lone bugler.

The casket was then brought back in the chapel for a private interment. Bagpipers played “Amazing Grace” during the interment ceremony. The chaplain’s remains were later lowered into a crypt inside Christ the King, a chapel that had been dedicated as a memorial to Father Schmitt after its construction in 1947.

The funeral and the day’s other events meant a great deal to Father Schmitt’s family. “Father Al was such a great man,” said the chaplain’s niece, Rose Foley. “I am so happy that this day has finally come.”

Foley said receiving the folded American flag that had been draped over Father Schmitt’s casket was an experience “I can’t explain in words.”

Elaine Sloan, whose late husband, Jim, was one of Father Schmitt’s nephews, said, “Today was such a blessing.” It felt like a “modern day miracle,” she said, that Father Schmitt’s remains had been identified and returned to the family after so many years.

The day had significance to many beyond the Schmitt family. For Lt. Brian Lewis of the U.S. Navy, the day marked the last leg in a journey he began earlier in the week when he flew from Memphis, Tennessee, to Honolulu to pick up Father Schmitt’s remains to bring them home to Iowa.

As the military escort, Lewis accompanied the remains as they flew to Atlanta, then to Chicago and then traveled on to Father Schmitt’s hometown of St. Lucas for a memorial Mass on Oct. 5, before finally arriving in Dubuque.

“I was with him every step of the way,” Lewis told The Witness, newspaper of the Archdiocese of Dubuque. “This has been a humbling experience for me. It’s been incredible to witness the outpouring of emotion as I’ve met people who have shared their stories along the way. I’ve met people who were baptized by the chaplain, who played checkers with him when they were a kid; I met his nieces and nephews and his great-nieces and great-nephews.”

“And at each airport we were at, the military and firemen and police paid their respects,” he said. “It’s been such an honor and a privilege.”

Raye Jean Plehn flew all the way from Las Vegas to be at Father Schmitt’s funeral. Her late father, Raymond John Turpin, was a 20-year-old Marine on board the USS Oklahoma the day of the Pearl Harbor attack and was one of the last people to see Father Schmitt alive.

As the chaplain pushed men through the porthole of the sinking ship to safety, Turpin was helping to pull them through from the other side.

Plehn said that her father, who died in 2009, opened up about his wartime experience later in life and shared with her the self-sacrifice of the man he referred to simply as “the chaplain.”

When Plehn learned recently that Father Schmitt’s remains had been identified and were returning home to Iowa, she said she knew she wanted to be at the funeral.

“I’m so honored to be here and honored to meet the chaplain’s family,” Plehn said after the funeral at Loras.

“I think it’s so nice that people are taking interest in his story even after all these years,” she said. “He was a true American hero.”