‘You give it your all’ 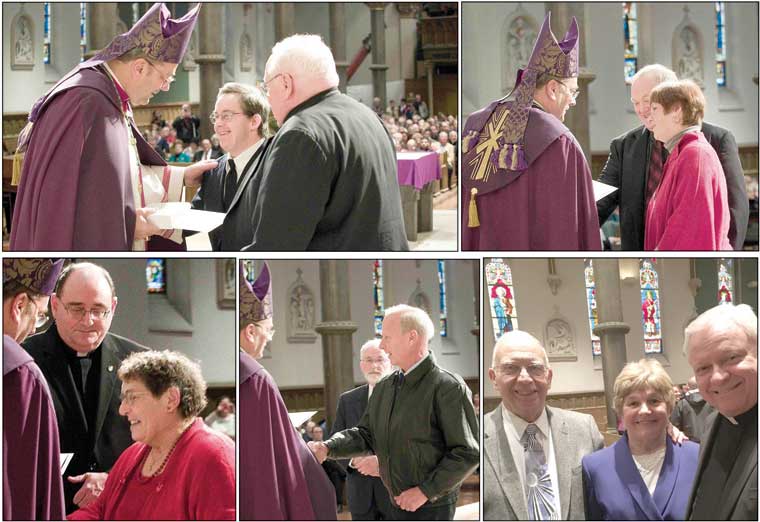 The Solemn Vespers served to “sanctify the day.” The ceremony that followed rewarded the days and nights, the weekdays and weekends.

More than 100 volunteers who have donated countless hours to more than 80 parishes in the diocese’s four regions received Immaculata Awards from Bishop Robert J. Cunningham on Sunday, Dec. 4, at a crowded Cathedral of the Immaculate Conception in Syracuse. The assemblage accompanied the cantor with a choir-like intensity and prayed with equal power.

“The Cathedral is never more beautiful than on a day like today,” Bishop Cunningham told the jubilant attendees. A pianist played nonstop in the sanctuary as the recipients received their medals from the bishop and then returned to their pews. One blew a kiss, another pointed. Some held hands with the pastors who had nominated them. “Hey, how are you?” one honoree whispered to a buddy.

The Immaculata Award was instituted in 2011 in honor of the 125th anniversary of the founding of the diocese. The award honors “the unsung heroes in our midst who build up our parish communities by extraordinary service in parish ministry in volunteer service.” Like many awards, it comes with an honor guard. Helping fill the Cathedral were the Knights and Ladies of the Holy Sepulchre, the Dames and Knights of Malta, and the Knights of Columbus.

It is a dramatic moment when the honorees learn they are receiving an Immaculata Award.

Tom and Winnie Esworthy were in St. James Church in Johnson City recently when Father John P. Donovan, the pastor, came walking up the aisle. Father Donovan knew that parishioner Sheila Madigan had received an Immaculata Award last year. So when he passed the Esworthys he gave them an envelope and said, “And the next recipients are.” He laughed, but then he turned around.
“He was choked up; he couldn’t talk,” Tom recalled.

Winnie explained that Father Donovan was emotional because he had gone to high school with the Esworthys; he was only a year behind them.

In his nominating letter, Father Donovan noted that Tom and Winnie are Eucharistic Ministers who have served on the Parish Pastoral Council several times. “They put in many hours of hard work,” Father Donovan said.

Winnie is a registered nurse who has found that one can meet a lot of nice people by helping out. She is “one of the first people called by parishioners when they have a health concern, to learn what questions they should ask their doctor,” Father Donovan said.

The Esworthys have chaired or helped organize over 30 fundraisers for cancer patients. Winnie herself said she is now doing well after being treated last year for breast cancer. Throughout her treatment she worked fulltime without missing any work. Tom, who works for New York State, gamely attended the Immaculata ceremony despite having a partial knee replacement three weeks ago. Eleven months ago, the Esworthys won the Broome County Ancient Order of Hibernians’ Community Service Award.

The couple is unstoppable. They raised about $40,000 for one cancer patient, a little girl who had to fly to Texas to be treated. The 5-year-old girl is doing very well now, Winnie said. She also serves as the parish nurse, taking blood pressures once a month for all the parishioners. One day at church she helped a man who had fainted, and he later came back and thanked her.

For about 20 years, the Esworthys have run the parish’s Turkey Party. Attendees pay $8 for all they can eat; the proceeds go to St. James’ coffee hours with doughnuts after every Sunday Mass. Another volunteer food enterprise for the Esworthys is candy-making every Easter. “We make candy and people order it,” Winnie said. The money goes to whatever the church needs. The beneficiaries of an annual golf event that the Esworthys run include veterans organizations and the St. James Food Pantry.

The couple has two new granddaughters this year, and that makes their days even busier. But they still volunteer for St. James after work and on weekends.

It is the kind of spirit mentioned by St. Paul in Sunday’s reading for the Immaculata Awards. St. Paul touts whatever is true, honorable, just, pure, lovely, gracious, and excellent.

Honoree Kevin O’Hara, of St. Anthony of Padua Church in Syracuse, has been true to his altar-server duties for 30 years, said the pastor, Father Robert D. Chryst.

O’Hara, who has Down syndrome, was happy to receive the award. Father Chryst told him he had a “surprise” for him, and then the pastor announced the honor to the congregation, while O’Hara was serving on the altar. “Some of the ladies were tearing up because they’ve watched him growing up,” said Kevin’s sister Peg O’Hara.

Kevin started working for the city even before he graduated from Henninger High School, Peg said. “My mom and dad did a really good job” raising Kevin, she said.

Father Chryst said O’Hara has worked for the mayor’s office in the print shop for many years, and he is very well-liked and respected. Kevin said the people at his workplace are kind, and he likes the Catholics at his church. He said he looks forward to serving on the altar, and he always has a very strong faith in God.

Peg O’Hara said Kevin is the youngest of five children. She called Kevin a “really great guy” and added that “he’s the best thing that happened to our family.” Kevin has his own office, desk, and phone, she said, and he makes mail runs. He knows everybody at City Hall, and he has competed in the Special Olympics in basketball, bocce, floor hockey, and softball, Peg said.

“He’s worked really hard to get where he is,” she said.

Another faithful and tireless volunteer is honoree Joseph Sojewicz of Our Lady of Lourdes Church in Syracuse. A member of the parish for about 45 years, he has been picking up food from markets and delivering it to shelters for 12 years, said the pastor, Father Thomas P. Fitzpatrick.

A retired truck driver, Sojewicz also does little jobs around the church, such as changing bulbs or moving things around. He gallantly took up the food-delivery job by himself when a couple of elderly guys who had been doing it came down with physical problems.

Between 8 and 9 a.m. four times a week, Sojewicz takes the Lourdes van to the Green Hills supermarket on the South side of Syracuse. “They usually get things all ready for me,” he said. He loads the van with edibles such as bread, rolls, pies, sweets, and some produce. He then drives the food to Chadwick Residence, which helps women and their children with transitional housing; Dorothy Day House, an emergency shelter for women; and the St. Lucy food pantry.

“They look forward to me coming,” Sojewicz said of the women’s shelters. “It saves their budgets. It’s not a big dent into their budgets but it saves them a little bit.”

If he takes a vacation, he tries to get somebody to fill in for him.

Delivering the food, he said, “kind of gives me a feeling of goodness … that I’m helping these people out.”

Another honoree who shows great loyalty to a parish is Mary Helen (Crisafulli) Colloca, of St. Joseph Church in Oswego. She received the parish’s Volunteer of the Year Award in 2015.

Laura Munski, the business administrator for the parish, said that she mulled a nominee for the Immaculata Awards with Deacon Nick Alvaro; Patricia Barnett, the director of faith formation; and Brenda Zumwalt, the parish secretary. Colloca “was just really a clear choice. … Everybody loves her, and she knows everybody,” Munski said.

Colloca noted that her parents, devout parishioners Giuseppe and Marie Crisafulli, got married in St. Joseph Church in the year in which it was founded, 1915. The parish is putting together a book honoring its 100-year anniversary, and Colloca single-handedly raised over $6,000 toward its publication.

How did she do that? Munski gave her three big boxes of names, and Colloca called everybody. “Yep, I love salesmanship,” she said. “I love talking to people. I don’t know — maybe a little natural ability.”

Her other contributions to the parish include the presidency of the St. Anne Society, chairperson of the Italian-cuisine booth for the church’s Festivale Italiano, collection counter, liturgical minister, and lector.

“I really wanted to be a success and I worked at it,” Colloca said. “Sometimes someone asks you to do something, you give it your all.”

Also fired up to help her parish is honoree Judy Lyrek, of St. Joan of Arc in Morrisville.

Father Richard B. Dunn, the pastor of St. Joan and also St. Mary in Hamilton, said that Lyrek leads singing at Mass, leads a Communion Service at a nursing home, and directs right-to-life efforts for both parishes.

Lyrek moved to the area 34 years ago from Minnesota. She used to do two or three things for the parish, but she noted that it is very small and people move away or pass away. So jobs need to be done, and “I’ve stepped in because I have the time, and I have the energy. … It’s something our parents taught us: to do for your parish.”

She has a social work degree, and she worked for 23 years as a probation officer for Madison County. She got involved in the anti-abortion movement in college in 1972. “I don’t know how anyone can be involved in killing a baby,” she said. “It blew my mind.”

Lyrek said she participates in a program every other year at St. Mary: “spiritual adoption of an unborn child.” Every day the participants say a prayer that a child in danger of being aborted will be saved. In nine months, the participants hold a baby shower.

“You put your trust in the Lord that there is a baby out there that you can pray for,” she said.

As impressive as the Immaculata medal is, it is the recognition that matters, said honoree Donald Makers, of St. Ambrose Church in Endicott.

He and his wife, Helen, have been helping out at both St. Ambrose and Blessed Sacrament since 2003, said St. Ambrose’s pastor, Father Donald Bourgeois.

Donald Makers said he is the computer expert and fix-it man for the parish, and he also designs wheelchair ramps for the Broome County Council of Churches. Helen provides administrative assistance for the parish.

The Makers hefted their Immaculata medal and showed it to an admirer.

“It’s going to be a wonderful remembrance, quite frankly,” Donald said. “It’ll be a memory of being here.”

To see more photos of the Immaculata Ceremony, visit thecatholicsun.com.