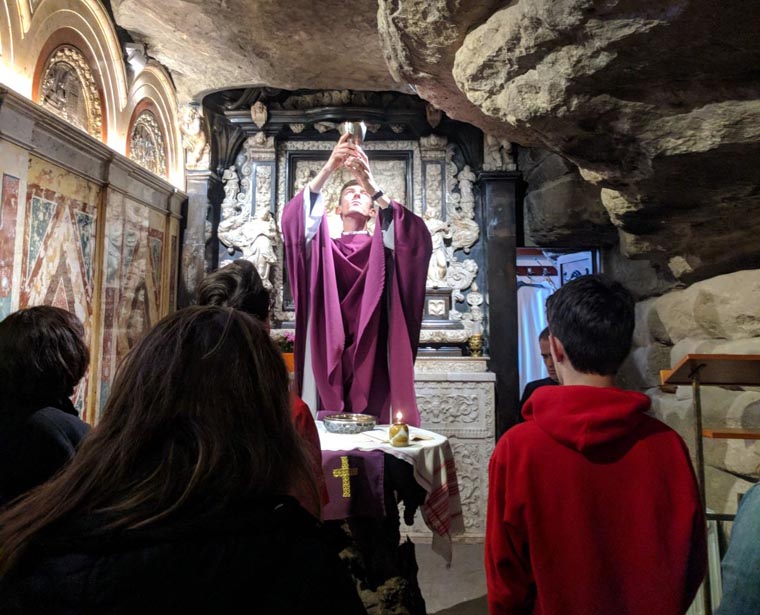 Sixteen teens and young adults from Holy Trinity Parish in Utica spent ten days in Portugal and Spain. Our goal was to deepen their faith through a personal encounter not only with the brick and mortar legacy of Catholic monarchs, and the spiritual depths of self-sacrifice of the Spanish saints, but also to pair these experiences with selected reasons for being Catholic. Our ten reasons listed on the back of their pilgrimage T-shirts included the following:

1) The history of Christianity is Catholic; our faith was established by Christ himself.

2) We have the Bible, tradition, and the pope for guidance.

3) The Eucharist—Jesus is truly present: body, blood, soul, and divinity.

4) We believe in the power of prayer.

5) We have the path that gives us the most assistance in entering heaven: seven sacraments and holy role models.

6) We defend human life from conception to natural death.

7) Our God is a God of second chances.

8) The Catholic Church has relieved more suffering than any other group in the history of the world.

10) We believe in eternal life.

Our hope was to help them better understand the gift of their faith intellectually and experientially. Our itinerary included Fatima, Portugal; Salamanca, El Escorial, Avila, Madrid, Barcelona, Montserrat, and Manresa in Spain. We were accompanied by Father Stephen Howe, L.C., and Seminarian Brother Andrew Torrey, L.C.

Here are a few of my personal highlights. Our pilgrimage began at the Shrine of Our Lady of the Rosary at Fatima, following the centennial of the apparition of the beautiful lady to the three shepherd children. Their witness revealed that sacrifice is a measure of love. It set an expectation of daily sacrifice for the duration of the journey. Participating in the candlelight procession and viewing the crown of Our Lady that holds the bullet from the assassination attempt on the life of Pope St. John Paul II were especially moving moments of grace. Our group brought with it many prayer intentions from home and this holy sanctuary was the place to lay them down before Our Lady in prayer.

A most remarkable location was the medieval walled city of Avila. We prayed before the tomb of St. Teresa and offered Mass at the Convent of the Incarnation where she spent her early years as a Carmelite. This historic residence of St. Teresa of Avila, home to 29 cloistered nuns, observes the same rules and hardships as the saint. The most notable to us was living in unheated conditions; we were uncomfortably cold ourselves. The nuns never leave the convent (except for a doctor’s appointment), and wear the standard habit and sandals. Their apostolate is prayer, especially prayer for priests.

We were able to have a conversation with an English-speaking cloistered Carmelite nun, conducted not as expected through a grille but rather from behind a “wooden turn.” These are normally used to pass items in and out of the convent but because it was Lent this anonymity was an additional sacrifice. Sister Nuria, former business executive in Madrid, had everything that the world could offer but at 28 decided to enter the solitude of the convent. There she found the fulfillment she was seeking in self-sacrifice and a “joyful life of prayer” with Jesus her beloved.

Questions from our group ranged from her parents’ and friends’ reaction to her life choice to the austere living conditions. She commented that being cold was the most difficult thing to adjust to. When asked if she desired to travel to holy places like Fatima she responded, “Through prayer, in my mind I can go anywhere. The spiritual dimension is limitless.” One could see the confused faces of the chilled teens warm from disbelief to a reluctant understanding. The visit served as a reminder of the contemplative dimension in all lives, our capacity for greatness, and most importantly the power and peace inherent in prayer.

We had hoped to include a half-day mission with the poor in Madrid but other variables prevented us. But without prompting some of our young adults and teens found Christ in the alleys and doorways of every city we visited. Disabled and homeless people were everywhere, some sleeping, if you didn’t look away as you passed them by. I was brought to tears by the spontaneous outpouring of concern by our young people who had the courage and compassion to approach them with a kind word, a warm drink, or even a pair of socks from their backpack for a barefooted old woman.

G.K. Chesterton is often quoted: “‘The Christian ideal,’ it is said, ‘has not been tried and found wanting; it has been found difficult and left untried.’” My hope is that our young people will have the fortitude to sincerely live their faith embracing these ten reasons and spending a lifetime adding to their list.