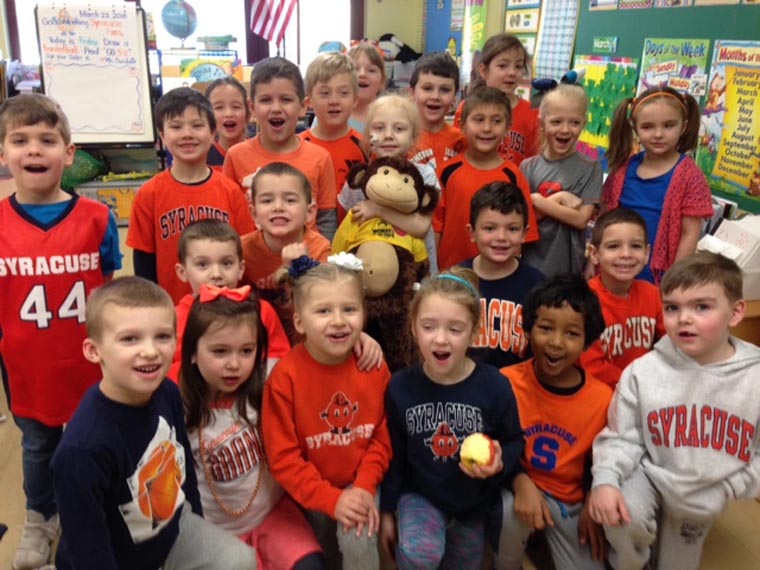 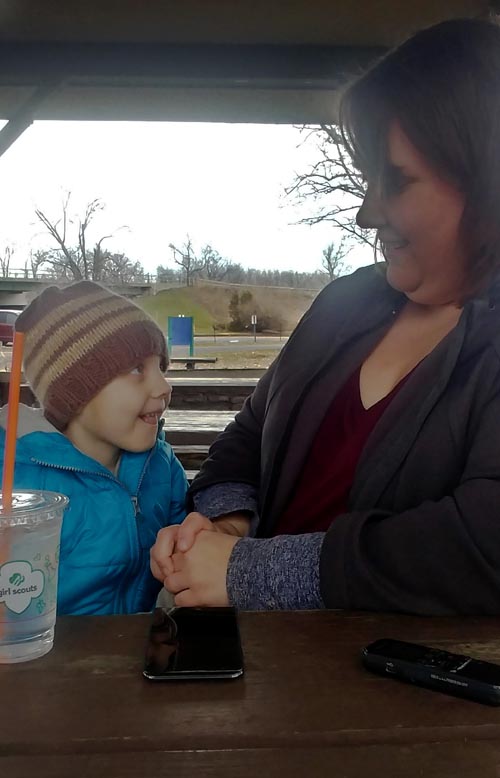 Fundraisers set up for St. Rose of Lima’s Kaylee Marshfield

On a cold, windy day last week, Kaylee Marshfield, six years old, in her blue ski jacket and woolen cap that sprouted wisps of hair, snuggled against her mother at a picnic table in a Willow Bay pavilion next to choppy Onondaga Lake.

Her mom, Kristina Crosley-Marshfield, had just said that Kaylee, a kindergartner at St. Rose of Lima School in North Syracuse, had received a card and some blessed rose petals from a church in Buffalo. In her tiny voice, Kaylee noted that she had just seen a squirrel.

A companion turned around and gave the lakefront a good sweep; no squirrel in sight. Kaylee’s mom related that when she was discharged on March 30 after her second surgery, Kaylee was told she did not have to report to the hospital. But she told her dad that, in fact, she did: She needed to deliver balloons to cheer up the other children.

On her sixth birthday, Feb. 1, Kaylee was diagnosed with a Wilms tumor: unfavorable histology with diffuse anaplasia — more than six inches long — on her left kidney. “Her birthday party was supposed to be that weekend but obviously we had to cancel it,” Kristina said. The hospital staff did bring in balloons, gifts, and a pink (her favorite color) cake. As her mom spoke, Kaylee gave a little jump at the mention of the word “cake.”

“It’s very rare for her age,” Kristina said of the tumor. Doctors performed two surgeries; in the second operation they removed the tumor and the kidney. “So right now she is tumor free; however, she’s not cancer-free is how they deemed it,” her mom said.

“So what they’re treating right now is the area where the tumor was, that if there are any cancer cells hanging out in that area, they’re zapping it out, basically,” Kristina said. Kaylee is receiving two weeks of radiation treatment, ending around spring break, and 30 weeks of chemotherapy, ending around Christmastime. The family requests prayers, but financial assistance will help as well (see accompanying fact box).

“She has an 85 percent survival rate with the course of treatment she’s on,” Kristina said. Less aggressive chemo treatment would mean less time in the hospital and fewer side effects, she said, but only perhaps a 72 percent chance.

“So my husband [Todd] and I with all the doctors agreed that going the more aggressive way would be in her best interest and give her a better chance,” Kristina said. There are risks of getting cancer elsewhere, she said, and the risk of getting scoliosis in the future from the radiation because it’s going over her spine.

“She is very, very strong,” her mom said. “She doesn’t really like to talk about it too much.”

Kaylee misses her 23 St. Rose of Lima classmates, whom Kristina called “a bunch of little angels, because they don’t make Kaylee feel like she’s sick or any different. They treat her like: ‘Hey, Kaylee, you’re back!’ … Her school’s been phenomenal, St. Rose has been awesome.”

Kaylee attends school when she feels up to it; when she is not there, a stuffed monkey called Banana Jack sits in her chair. Classmates write get-well cards and put them in Banana Jack’s backpack, and Kaylee’s sister Abigail, 4, who attends pre-kindergarten at St. Rose of Lima, takes it home to Kaylee. “She’s kind of crazy,” Kaylee said of Abigail. Kaylee also has a sister named Isabelle, 2, and a brother, Dylan Crosley, 16. Dylan and Kaylee love to play together. 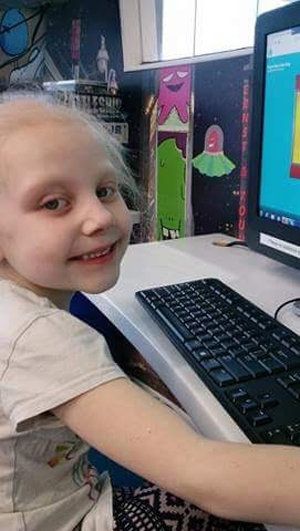 “The students pray for her every day, we pray for her family,” said Kaylee’s teacher, Joanne Cianchetta. The school held a dress-down day, accepting $1 donations for Kaylee, a very determined girl who even came to school with a feeding tube in her nose. “She’s a tough cookie,” her teacher said. She said a lot of St. Rose families attended a “Kicking it with Kaylee” party at Todd’s place of employment, All Star Alley & Tavern at Destiny USA.

“Mrs. Cianchetta sent us a letter this morning,” Kristina said, “and I read it to her. She got a little weepy.” Very much interested in her classmates, Kaylee noted that the tables in her classroom have been switched around.

Kaylee walks very deliberately now, although she still gravitates toward a playground such as the one near the pavilion at Willow Bay. She carries her baby “blankee,” “Night-Night,” everywhere.

“Pretty much she can do everything that a six-year-old can do,” her mom said. “We don’t restrict her. I’m pretty sure some other parents in our situation might baby their children a little more, but with Kaylee we don’t treat her any different, she doesn’t wanted to be treated any different. I just tell her to be careful.”

If she falls, Kaylee knows she must fall on her back, because she has a port installed in her chest — a “button,” they call it — for the administration of the chemotherapy.

Last Christmas, Kaylee’s grandfather was diagnosed with prostate cancer (he and Kaylee had surgery a month apart). Also around Christmastime, the Lakeland family noticed that Kaylee wasn’t eating much and was losing weight. She used to be very active with karate, ballet, jazz, tap, and hip-hop classes. When her mom noticed a hard bulge on her side, they went immediately to Upstate Golisano Children’s Hospital in Syracuse.

Because Kaylee is on the older scale for a Wilms tumor, her mom said, “it’s harder to attack. Basically, it’s cells that … didn’t develop fully when she was a baby and then all of a sudden they just developed, and it just turned into a tumor and it just kept growing.”

“Obviously I had mother’s guilt when I first found out,” she said. “Is there something I did while I was pregnant with her; did something happen when she was a baby; did I give her something she shouldn’t have had; has she been exposed to something.

“And they’re like, no. There’s nothing I did wrong. It just happened.” The surgeons removed some lymph nodes around the tumor, and those tested negative for cancer, so it hasn’t spread, Kristina said.

Kaylee’s stitches from the operations are almost healed; “she’s got a big railroad track across her belly,” Kristina said.

The family’s support circle is huge but it needs to be huger. Kristina works for a warehouse in Tully, and her eight-week family leave is up on April 27; she hopes that she can still work and take care of her family too. The family has been doing fundraisers to try to offset medical bills and the cost of groceries. “I haven’t got her bills yet from her second [hospital] stay,” Kristina said, “so hopefully it’s not as big as the last one.”

She diligently researches organizations that assist families hit by pediatric cancer; she is open to suggestions. Organizations that have reached out to her family so far, she said, include Griffin’s Guardians; the Jonathan Cancer Fund, Inc.; Paige’s Butterfly Run, Inc.; and T-Burg [Trumansburg] Takes on Pediatric Cancer. Also, Kaylee is an honorary St. Baldrick’s kid. Twenty-one men who didn’t even know her had their heads shaved in the annual event put on by Kitty Hoynes Irish Pub & Restaurant.

“We brought Kaylee down to meet them,” Kristina said, “and just see how many people loved her just from hearing about her. It was amazing.”

Out of thankfulness to those who help Kaylee, Kristina gives out rubbery bracelets that say “Kicking it with Kaylee.” She hopes that when people look at the bracelet they are wearing, they will say a prayer for Kaylee, who smilingly offered a bracelet across the Willow Bay picnic table. It had started to rain. In a couple of hours, Kaylee was due for a 10-minute radiation session. Her eyes had grown sleepy. She and her mom walked back to the parking lot, and, taking a huge step by herself, Kaylee slowly climbed into the back seat of the high-riding van.

Kristina had said that she and Todd are  both going through shifting emotions: “We’re angry, we get sad, you know, but you see how strong Kaylee is, you know she’s gonna beat it.”

Be Kind to Kaylee

Here is how to help Kaylee Marshfield, in addition to your prayers:

• “Kicking it with Kaylee T-shirt fundraiser”

• “Kicking it with Kaylee GoFundMe page”

• Bottle & can donations can be brought to All Star Alley & Tavern in Destiny USA mall.

• Get-well cards can be mailed to: