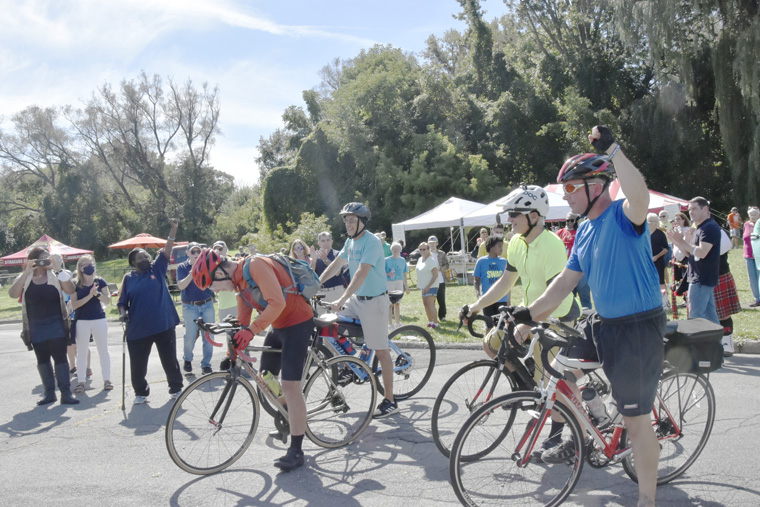 The wife spoke tenderly to the intrepid husband.

“Love you, have fun!” Veronica Connors told Daniel Connors, who along with three other adventurers left Syracuse Sept. 25 for a bicycle trip of more than 450 miles to the steps of the Capitol Building in Washington, D.C.

They hope pledges raise thousands of dollars for the Brady Faith Center, which offers 22 programs in the Near Westside and South Side of Syracuse. Go to gofundme.com and search for “Bike from SYR to DC: Brady goes the ‘extra mile.’”

The bicyclists’ starting point was at one of those programs, the 5.8-acre Brady Farm off Valley Drive. Monarch butterflies in impressive numbers inspected the similarly colored Mexican sunflowers as the bicyclists departed amid music and applause from dozens of admirers. “Amazing Grace” was performed by a bagpiper and also the Baldwinsville Youth Singers. Food was available, and staffing various tables were groups including Hope for Bereaved, Hospice, L’Arche, On Point for College and the Syracuse Fire and Police departments—a festival on the farm.

Also supporting Dan Connors were his daughters Sophia and Ariana. “I’ve been through a lot,” joked their mom, Veronica, referring to the epic bike trip that had been planned for almost five months. She told a bystander: “I’m so proud and excited for him.” Sophia dittoed that.

“I lost 15 pounds” prepping, said Dan, who co-chaired the day’s festivities with Veronica.

Asked about any trepidation, he said: “You can’t take it for granted at all. Every mile, you gotta watch out for somethin’. There’s a lot of potholes, the roads are in disrepair. But traffic is crazy at times, so I’m not taking any of this for granted.”

They have mapped out a side route on Route 11, staying away from Route 81.

“Any way you cut it, it’s gonna be crazy goin’ down there,” Dan said. “But I think as long as we stick together as a team, we bike safe and we watch out for each other, we’ll be just fine.”

They will probably average around 15 mph. They might hit 50 mph going down a hill, and go as slow as 6 mph going uphill.

“In six days we’ll be reaching Washington D.C.,” announced Kevin Frank, the executive director of the Brady Faith Center. The bicyclists have a meeting planned with Congressman John Katko on the Capitol steps. Frank was also working on meeting with representatives of the Secretary of Agriculture and Sen. Chuck Schumer, and he had sent an email to Sen. Kirsten Gillibrand the night before the quartet’s departure from the farm.

Executive Director Frank included a plug for another BFC program, the Brady Market at 307 Gifford St.: “If you need a catering job, we cater. … Great chefs. Please look us up at Bradymarket.org and think about us; every dollar spent in [the] store stays in our community; other places can’t say that. So keep revenue where it’s needed the most—right here on the Near West and South Side.”

Sounding quite calm about the D.C. trip was bicyclist Charlie Reller, a major supporter and contributor to BFC. Asked why he was doing what someone called “this crazy stunt,” he replied:

“It’s crazy enough to generate some publicity and so we’re just kind of getting some attention for the Brady Faith Center and all of the various programs at Brady, and raising a little money in the meantime as well. We’re meeting with a couple of politicians when we get to D.C., which is always gonna be helpful to our cause, so it’s stretching ourselves for Brady.

“The four of us, we’re four bike riders and so we like doing this sort of thing anyway. It’s quite an adventure; we’re actually just looking forward to the adventure,” which he noted also has a purpose.

He rides a 24-speed road bike with a well-worn seat—“I’ve had this bike for quite a while, so it served me well and I figure it’s got 500 more miles in it.”

The quartet will not be looking for handy ditches to sleep in. “We’re gonna certainly get comfortable in the evenings,” Reller said, and we’re actually going to have some support—a couple of the wives are driving alongside” or will be around, “and so we’ll be staying in hotels in the evening and starting out in the morning. … Tried to pick out the low-traffic ride. Been training for a while, certainly motivated. And … right now it looks like we’re going to be blessed with some good weather.”

Two weeks before, Reller had returned from riding his bike along the Continental Divide.

Asked to compare that with the D.C. trip, he said: “I would think this would be quite a bit easier. … We rode on gravel road and we climbed up the Rocky Mountains.”

Danielle Allen, a peer leader at Brady Market, told the assemblage that she just wants to pray that the riders are safe.

Attendee Ben Preston, a North Syracuse resident who still belongs to the Brady Faith Center, said he thought the day was great “because it was for Brady, and Brady has my heart.” He added that bike rider and BFC Executive Director Frank is “really an inspiration and he’s taught me how to live.”

“I’ve known of Father Brady, and ‘God love you,’ of course, and his work for many years in this area, in this neighborhood,” said farm visitor Mike Farrell, of Syracuse, “and this is such healthy and wonderful work that they’re doing here—growing food, I mean you can’t beat that.”

On Sept. 27, Frank emailed this to friends of BFC:

Monday night update: Traveled 110 miles on day 2 and another 110 miles on day 3. WOW! Epic adventure, so grateful to ride with 3 great friends (who I am drafting behind for nearly every mile we’ve traveled) and have the support of Diane Rizzo [wife of the fourth bicyclist, John Rizzo] and Emily Nisco-Frank [Kevin’s wife] on the way. There is no way we do this outside of our Bike for Brady team which includes each one of you!”