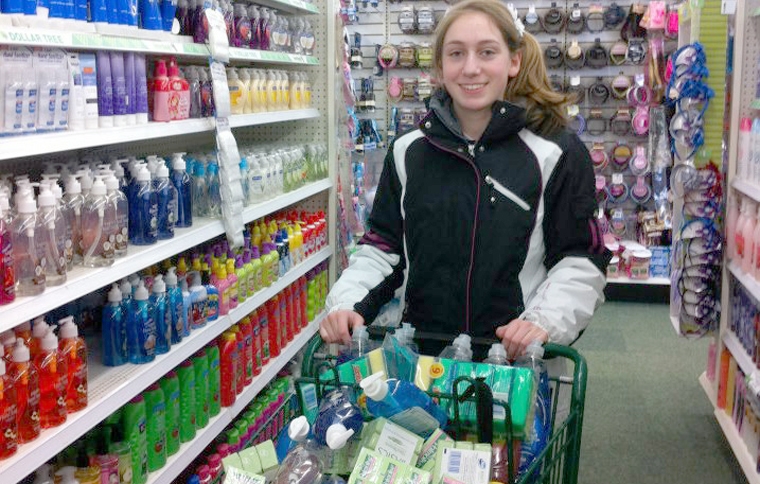 Teen collects toiletries to help others

In 2009, when Adena Rochelson of Fayetteville was only nine years old, her mother asked her to help volunteer at St. Lucy’s Food Pantry

in Syracuse. As Adena walked the aisles at the food pantry she noticed a few shelves marked for soap and toiletries stood empty. When she asked why, the pantry staff explained that most people tended to donate food items instead of soap or shampoo.

“I thought this was something I could help with,” stated Rochelson, now 15, a student at Fayetteville-Manlius High School and chief coordinator of Operation Soap Dish, an organization that donates toiletries to people and organizations in need. “I was pretty gullible at the time and I thought I could solve this problem with my allowance of $4.50 a week,” laughed Rochelson. “I quickly realized that wasn’t going to work and I needed to come up with a bigger plan.”

Rochelson found out that soap and toiletries were not covered by food stamps and the need for these products was prevalent in the community. “I think being able to wash your hair or brush your teeth just makes a person feel better about themselves,” stated Rochelson. She began asking friends and family members to donate shampoo and toiletries for the food pantry. People began to drop off donations of conditioner, soap, toothpaste and shampoo and Rochelson counted the products and delivered them to the food pantry with her parents. “My goal that first year was to collect 1,800 products and we collected that in just six months,” stated Rochelson proudly.

Before long donations began to take up every available space in Rochelson’s bedroom. “One night my mother came in to tuck me in and stepped on a bottle of shampoo and it went all over the floor. She told me ‘We need to come up with a better idea than this for storage,’” laughed Rochelson.

The Rochelsons turned their former family room into the Operation Soap Dish Warehouse. Also set up in the room is a small office for Rochelson to record information and collection needs not only for St. Lucy’s but also for Vera House, Meals on Wheels, Ronald McDonald House and other charities in the area.

To date, Operation Soap Dish has distributed more than 25,000 items and helps approximately 1,600 families a month in the Syracuse area.
“Where we donate also depends on what we collect,” explained Rochelson. “If the products are for women, we give the donation to Vera House but if it’s more along the family-size items, it goes to Ronald McDonald House,” stated Rochelson.

The collection program flourished so much that in 2013, Rochelson launched operationsoapdish.org, offering information on how people can volunteer or run their own collection drives. “People really seem to like the site and share with me where there’s a need for the products in the community,” said Rochelson. The site also includes links for Operation Soap Dish on Facebook and Twitter, as well as a list of the 15 states and three countries that have participated with the organization.

Rochelson spends most of her days working on Operation Soap Dish with the exception of a few weeks during the summer when she attends sleep-away camp. “I still stay involved even when I’m at camp. My mother sends me updates on where deliveries are going by email or letter,” said Rochelson.

Looking toward the future, Rochelson hopes there will come a day when the need for organizations like Operation Soap Dish won’t be necessary. “I really hope that someday everyone can wake up and have what they need to have a clean smile and clean hair.”

Rochelson hopes to work for a non-profit organization in the future but for now continues on her quest to collect products for those in need, but points out that even though she runs Operation Soap Dish, she’s just like any other teenager. “I’m just a normal kid,” laughed Rochelson. “I just have a different kind of hobby than a lot of my friends. They go to dance class, play sports and I count toiletries.”