In 1994, Bishop Joseph O’Keefe agonized over whether the Syracuse Diocese should assume ownership of Christ the King Retreat House. The Jesuits wanted to give the retreat house to the diocese, but the bishop worried about the financial cost of the many repairs that were required for the upkeep of the building and grounds. Eventually, the diocese assumed responsibility for the property from the Jesuits and completely renovated it.

“The bishop felt it would be a spiritual lighthouse,” said Father  Michael Carmola, director of Christ the King Retreat and Conference Center since 1994. 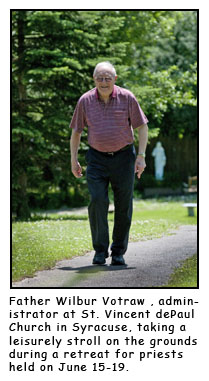 Father Carmola said that Bishop O’Keefe wanted to have a place where priests could go on their day off, or if they just wanted to get away for a day to catch up on their work or sleep, or to pray.

Recently, many priests enjoyed a retreat at the center June 15-19. The retreat was presented by Father Louis Sogliuzzo, SJ, Director of Campus Ministry at Le Moyne College.
“I see them [priests of the diocese] relax and talk to one another,” said Anne Richter, associate at Christ the King Retreat and Conference Center. “It’s wonderful to see someone minister to them.”

Richter described what the last nine years have been like for her at the center. “It’s been glorious and wonderful,” she said. “People that come here want to get closer to God, and in this atmosphere, they tend to talk freely. Everyone has their own faith story.”

Even though Christ the King Retreat House was secured with the intention of providing a haven for priests in 1994, it was also opened to men and women, youth groups, groups of all religious denominations and business and corporate groups. Attendance has grown considerably over the years. Today, the center averages 9,000 visitors per year.

Each year, a retreat is offered to RCIA groups a few weeks before the Easter Vigil. Many other programs are offered at the center. The Pathways to Prayer program is offered twice each month. All are invited to an hour of prayer which takes place within a group setting. Also offered are weekend retreats for persons in recovery, marriage encounter weekends, days of renewal for the separated and divorced and men’s retreats, among others.

Marian Crinnin, a parishioner at St. John the Baptist in Syracuse, has visited the retreat center since the very beginning. She remembers attending a dance there as a child. Her brother is a Jesuit so she was acquainted with them when they were in charge of the center. “It’s in our upbringing,” said Crinnin. “The place is beautiful and it’s so peaceful. It’s a home away from home.” Crinnin said she enjoys many activities there, including Christmas Eve Mass, Advent activities, Day of Recollection and the senior picnic, which is held in August. She also volunteers there once a month. 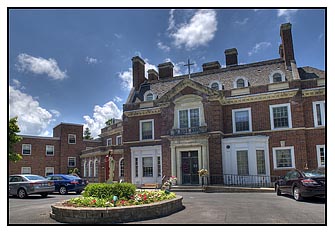 Richter recalled how people say, “You can feel the peace here,” as they enter the retreat center.

Father Carmola stressed the importance of taking time out of one’s busy life for respite. “The church offers many gifts, but this is a gift that the church provided that people are unaware of,” he said. “There’s a part of the human personality that needs to stop and listen in order to experience the presence of God. Each day I pray that anyone walking through the door experiences the presence and spirit of God. I’ve enjoyed watching people experience peace here.”

At 88 years old, Peg Sopchak, a parishioner at St. Daniel in  Syracuse, said the retreat house has been an important part of her life  and it is her favorite place to visit. Her father and her husband, who are both deceased, were also involved in the activities at the center.

“I enjoy the silence when I visit there,” said Sopchak. “I love being around the Blessed Mother and visiting the Blessed Sacrament Chapel. All I feel is love.”

Marianne Carbone, administrative assistant at the center, said the economy and budget cuts have had a severe impact on the finances of the retreat center. The staff hopes that the center’s budget will be bolstered through increased use of the facility. “Our greatest frustration is that many people don’t know that we are here,” said Carbone. “Our priests have been very supportive in encouraging people to come here and they have also come themselves.” 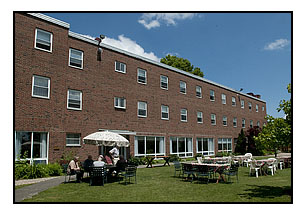 The retreat center is a few miles from downtown Syracuse, yet it sits secluded on top of six acres of rolling hills.

Overnight accommodations are available for up to 60 people and a full dining facility is on site.

Beautifully-landscaped, spacious grounds surrounding the building include 32 memorial gardens. An Olympic-sized swimming pool is also part of the landscape. A pond is situated opposite the swimming pool. The bricks surrounding the pond were purchased by people in memory of their loved ones. Colored flowers are interspersed throughout the grounds. There is a wooded area on the property that offers a stunning view of the nearby hills. Also included on the grounds are the All Saints Terrace and the Stations of the Cross.

Christ the King Retreat and Conference Center was a former private home built in 1934 for the daughter of a wealthy Syracuse businessman. It was designed by architect Webb Moulton and built in the grand style of the 1930’s with high ceilings, a sprawling spiral staircase and stained glass windows. Marble and beautiful wood accents are located throughout the home.

In 1944, following the death of the owners, the home was purchased by the Jesuits and was operated by them until 1994, when the Syracuse Diocese assumed ownership.

This year marks the 15th anniversary of the diocese taking over the retreat center and it has been highlighted throughout the year with birthday cakes at many of their events. On Aug. 26,  the Night of Appreciation and Gratitude will be held at the center. Hors D’oeuvres and a birthday cake will be served at the celebration. Father Carmola said that the event is being held to express appreciation for the people who have been supportive and generous.

The center’s staff encourages visitors to come to the center and are happy to give a tour.

For more information about the Christ the King Retreat and Conference Center, call (315) 446-2680.