A priest to remember: ‘FD No. 1’ Father Buckley had many roles 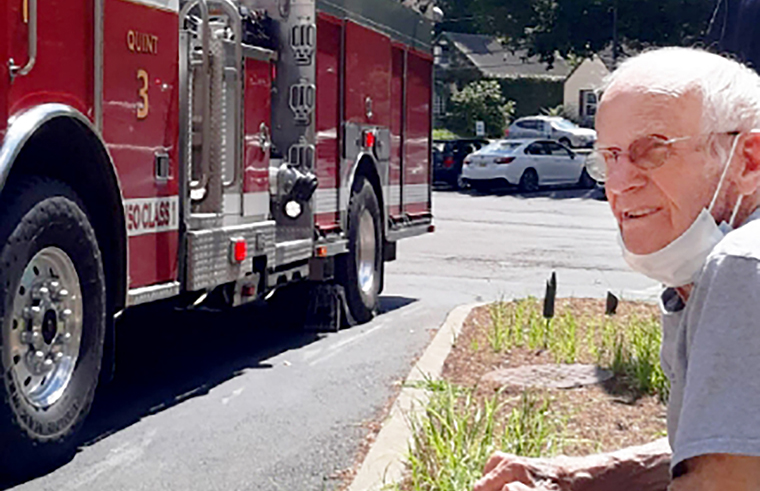 There was an empty chair at the table on Oct. 13 at the priests’ dinner in Vestal. That’s where Father Gerald J. Buckley would usually sit each Thursday evening. The group offered a toast for Father Buckley who died on Oct. 12 at Lourdes Hospital at the age of 93.

“This was central to his week,” said Father James Serowik, pastor at St. Vincent de Paul Blessed Sacrament Church and host of the dinners.

“He loved being with the guys,” he said, “here sharing fraternity.”

“He was a priest’s priest,” Father Serowik noted.

Father Buckley grew up on Binghamton’s North Side where he attended St. Paul’s Church. He was a graduate of the parish high school and went on to St. Bonaventure University. His seminary studies were at Christ the King in East Aurora and St. Joseph’s in Yonkers.

After his ordination in 1957, Father Buckley was an assistant at his home parish, St. Paul’s. In 1966, he was sent to St. Joseph’s in Otisco, where he served until 1969, when he was named assistant at St. Rose of Lima in North Syracuse.

Father Buckley’s first pastorate came in 1973 at Corpus Christi in South Onondaga as well as St. Patrick’s Mission in Otisco. He returned to the Southern Tier in 1977 when he was named pastor at St. Joseph’s in Deposit.

Father Buckley sometimes spoke of sharing time with a motion picture priest while there. Donald O’Connor starred in the movie “A Time to Remember” that was shot on location in the church and rectory. He recalled that O’Connor was very gracious during his stay in town. And he mentioned the actor borrowed some of his priest’s attire to wear in the movie.

In 1987, Father Buckley was named pastor at St. Andrew’s in Binghamton. He remained there, other than a short sabbatical, until his retirement in 1999.

Father Buckley served since 1970 as a chaplain to the Binghamton Fire Department.

“They’ll be very present as his honor guard at the wake,” said Father Corey VanKuren who also serves as a chaplain at the fire department. He said fire rigs would also be present for the funeral. The wake (Oct. 18) and funeral (Oct. 19) were held at St. Paul’s in Binghamton.

Father VanKuren said Father Buckley saw a lot of fire chiefs as well as firefighters in his time with the department. He said they remembered Father Buckley after his death.

“Somebody posted online that one of the things they will miss is riding in the rig [for] every fire. Before anybody else got to the fire, they would hear ‘FD No. 1’ on the scene. He was there before everybody else. [The] scanner was always going in his room, so he knew everything that was going on all the time,” Father VanKuren said.

Former Binghamton Mayor Rich Bucci said in an email: “Father Buckley was a Binghamton native who worked tirelessly in our community as a devoted priest and dedicated pastor. But the position that held a special place in his heart … was his role as Binghamton Fire Department Chaplain.

“During his tenure as Fire Chaplain, he was a constant source of support and comfort for firefighters and their families. He epitomized what it meant to be hands-on, often accompanying trucks to the fire scenes. He wanted to be readily available if needed.

“Father Buckley was a devoted public servant. While the Fire Department and the City of Binghamton will deeply feel his loss he will not be forgotten.”

In recent years Father Buckley also served as chaplain to the Ladies of Charity. Until earlier this year, he also said Sunday Mass where he was needed in Broome and Chenango counties.

He was also chaplain at the Greater Binghamton Health Center since 1995. He offered Mass there for patients each Tuesday. But that was cut back in 2020, when the pandemic shut down the facility.

Deacon Gregory Hrostowski became close to Father Buckley in the last couple of years after assisting him at the Health Center.

“Father Buckley was very down to earth, a friend, easy to talk to and a good listener,” said Deacon Hrostowski.”

“I tried to listen more than talk and he was someone who I was always comfortable to be silent with. A good sense of humor, accepting of others, understanding where they were at,” he said.

“He was very reverent and his personality was Christlike and sincere.” Deacon Hrostowski added.

The obituary on the website of J. A. McCormack Sons Funeral Home in Binghamton notes that Father Buckley was predeceased by his parents, John and Florence; brothers John and Frank; and sisters  Geraldine Hoban and Loretta Seaburg. He is survived by his beloved sister, Theresa Whelan, and numerous nieces, nephews, cousins and friends.