A revolution of tenderness 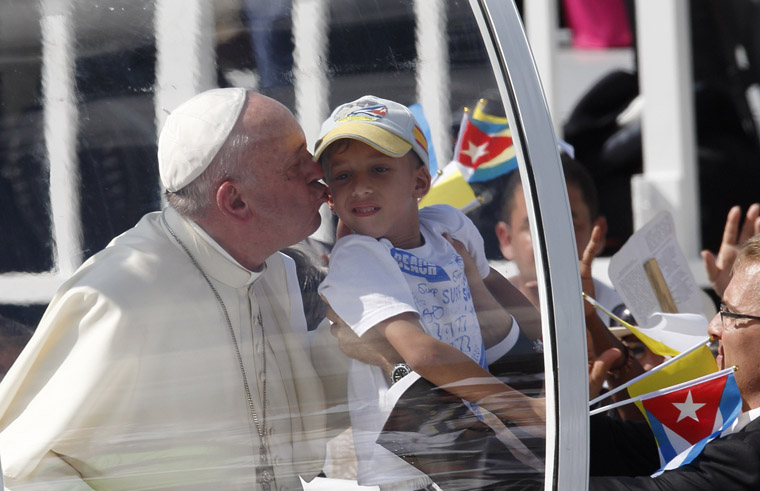 PHILADELPHIA – Three weeks before Pope Francis was to arrive in the U.S., papal fever was on the rise in the City of Brotherly Love. City Hall’s gift shop was among several downtown spots with life-sized cardboard cutouts of the pope. Local TV stations broadcast traffic and organizational updates. Airport shops displayed rows of shiny Philadelphia magazines, featuring a Shepard Fairey-inspired “POPE” on the cover.

Street vendors were selling pope T-shirts.
And that’s just one of three cities on the papal itinerary.

As the public’s papal frenzy grew, organizers tackled the complex details for the historic visit. Logistics and security plans are unprecedented, according to people who worked on Vatican events. Planning the papal visit is “like a visit from the Dalai Lama, a visit from the Israeli prime minister and the wedding of British princess all in one,” said Helen Osman, secretary of communications for the U.S. Conference of Catholic Bishops. She was among church officials and Vatican experts who last month briefed journalists about the papal visit during the Religion Newswriters Association conference in Philadelphia.

One reporter asked about the pope’s stamina. The 78-year-old pontiff will celebrate three public Masses; meet with White House officials and U.S. bishops; greet the public in all three cities; and deliver major addresses to the U.S. Congress and at the United Nations.

“They [Vatican officials] are concerned, but they know he drives the schedule,” Osman responded. “He’s an energizer bunny.”

Journalists asked about the pope’s itinerary. Would he go to New York’s Central Park? (That stop was later added to the official schedule.) Would he meet with Fidel Castro in Cuba? What about meeting with clergy sex abuse survivors? Will he comment on racial equality? Gun control? The Iran deal?

No one knows for sure. (Or if they do, they’re not saying.)

“He’s always changing things until the last minute,” said Austen Ivereigh, a veteran Catholic reporter and author of The Great Reformer: Francis and the Making of a Radical Pope (2014). Predictions and interpretations are complicated by the pope’s “deliberately unscripted and dynamic style” amid “liberal fantasy and conservative anxiety [that] feeds off each other,” Ivereigh said.

Pope Francis’ unpredictability, speakers agreed, is about the only sure bet. “There will be no lack of surprises,” said Guzmán Carriquiry Decour, secretary for the Vatican’s Pontifical Commission for Latin America. With the caveat that anything is possible, here’s a look at several themes experts say provide important context to Pope Francis’ first U.S. visit.

Long before details of the three-city tour emerged, the Vatican chose Philadelphia to host the World Meeting of Families. One reason may be the city’s Catholic roots and its connection to religious freedom, which date to the late 17th century, when Philadelphia was a colony. Philadelphia was the site of the first American parochial school system, created in response to anti-Catholic sentiment. Two of America’s 10 saints, Katharine Drexel and John Neumann, ministered in Philadelphia.

Philadelphia also holds a central spot in American history.  The Declaration of Independence and Constitution were signed at what is now Philadelphia’s Independence Hall. The Liberty Bell remains an iconic symbol of a core American belief.

The pope visits New York and Washington as head of state, said Kenneth Gavin, communications director for the Archdiocese of Philadelphia. “Philadelphia is where the Holy Father touches the face of humanity. This is the very pastoral portion of his visit to our country,” he said. “Philadelphia was an archdiocese and a city in need of healing. Francis will provide that for all of us.”

In addition to the challenges of an aging and shifting population, the archdiocese was the site of one of the country’s worst clergy sex abuse scandals. A 2011 grand jury report found as many as 37 priests remained active in the archdiocese despite credible accusations against them. The report prompted the indictment of four priests and a parochial school teacher. In addition, the archdiocese’s chief financial officer was convicted in 2012 of embezzling nearly $1 million.

“We had an ugly time in the Archdiocese of Philadelphia,” Archbishop Charles Chaput said. “Nearly everybody in the church was angry about something.” The papal visit and World Meeting of Families offer a chance for a “turnaround moment that renews the spirit,” he said.

Why will he speak Spanish?

Pope Francis will deliver 18 speeches: four in English and 14 in Spanish. (Translations will be available.) He will speak English at the official welcoming ceremony at the White House and when he addresses the U.S. Congress. His U.N. speech and the homilies at all his Masses will be in Spanish.

Spanish is the Argentine-born pope’s first language. He also speaks Italian and German and has said that English is the most difficult language for him. Spanish is also the second-most-used language in the U.S, where 54 million Hispanics represent about 17 percent of the population.

No matter the reason, speaking Spanish points to the importance of Hispanics to the U.S. Catholic Church. About 38 percent of adult Catholics in the U.S. are Hispanic, according to the Center for Applied Research in the Apostolate at Georgetown University. Immigration and high birth rates have helped keep the American Catholic Church’s membership levels steady. But an increasing number of American Hispanics are leaving the Catholic Church. The defections to Pentecostal churches, or to no organized religion, worry Catholic leaders, experts say.

The pope’s language overlaps with his focus on immigration. Pope Francis, whose parents fled Italy for Argentina, clearly identifies with immigrants. His first official trip outside Rome as pope was to the Mediterranean island of Lampedusa, where he commemorated North African migrants who died trying to get to Europe. Earlier this month, he asked every Catholic parish or religious community in Europe to take in refugee families fleeing the war-torn Middle East. The pope no doubt is aware that immigration reform will likely emerge as a central 2016 presidential election issue.

Los Angeles Archbishop José Gómez hope[s] and pray[s] that the Holy Father will speak about immigration. He has said over and over again immigration is a human right. “Immigrants are children of God and need to be treated with all the dignity we deserve.”

Catholics are more likely than other Americans to be immigrants or children of immigrants, according to Pew Research Center. More than a quarter of U.S. Catholic adults — 27 percent — were born outside the country, compared with 15 percent of U.S. adults overall. Underscoring the prominence of Hispanics in the American church, the majority of Catholic immigrants hail from elsewhere in the Americas.

Through a Latin lens

Argentina, which is nominally Roman Catholic, has a history of welcoming European immigrants after its independence from Spain in the 19th century. Until the 1950s, a majority of Argentina’s immigrants came from Spain and Italy. Only after the 1983 Falkands War with Great Britain did Argentina shift its identity away from Europe and toward Latin America, Bermúdez said.

Pope Francis sees Latin America as on the periphery of Western culture, he said. The periphery is “a place that we not only have to go and serve, but it’s also a place that is a source of hope for the renewal of whatever is the center.”

Focus on the periphery

The pope’s trips always highlight small poor places, Ivereigh, the writer, said. In the U.S., he’ll address the U.S. Congress, then meet the homeless; he’ll talk religious liberty in Philadelphia, then receive migrants.
“It’s all about connecting the papacy to the periphery, the center to the margins, allowing the pastoral to be brought to bear on the doctrinal and inviting the church to live in that tension,” Ivereigh said.

The pope lives that tension: He is a Jesuit and comes from the south, from the periphery. From that vantage point, “he’s seeking to purge the church from its attachment to the things of this world in order to focus on mission and evangelization,” Ivereigh said.

Pope Francis’s reform emerges in his proximity to the poor, he added. “Poverty, austerity and evangelical simplicity are invitations, they’re signs of the need to depend on Christ rather than on wealth, status and power,” he said

The pope critiques “elite detachment,” when the powerful “become closed off from ordinary people” and “move in their own light instead of reflecting the light of Christ,” he continued. He deplores “wealthy Catholics who hold expensive fundraising gala dinners to raise money for the poor but have no direct contact with the poor,” he said.

Message to the world

Maryann Cusimano Love, who teaches international relations at Catholic University of America, shared a concise list of topics the pope is likely to mention at the United Nations. Watch for references to poverty, planet, people before profits and peace, she said. It’s less likely, she said, that he’ll refer directly to another “P” word: politics.

He’s concerned about climate change, human trafficking, poverty — all situations resulting from the ways people interact with each other and the world. “These are symptoms of a larger problem when we forget who we are, where we come from and how we are connected to the planet,” she said. “We worship the God of money and technology. … We have forgotten the common good as we have forgotten the common home, the Earth.”

Expect references to ideas in his recent encyclical, Laudato Si. “He will endorse sustainable development and call on all countries to implement the goals of lifting up the poorest and most marginalized,” Cusimano Love said. “He will note that the poor are most hurt by climate change and environmental degradation and have the least say about it,” she added.

His comments at the U.N. will be a message to the world, noted Archbishop Bernardito Auza, apostolic nuncio, the Vatican’s permanent observer to the United Nations. “The world sees him as not only the spiritual leader of the church, but the moral leader of the world,” he said.

He “will not shy away from mentioning things with which the U.S. does not agree with the U.N.,” he added.

Immediately following the pope’s address, the U.N. will open its summit on its 2030 sustainable development agenda: Transforming Our World. The agenda “is a plan of action for people, planet and prosperity,” according to the U.N. website. Pope Francis is likely to “touch on the major elements of the document,” which emphasizes poverty as “the greatest global challenge,” Archbishop Auza said. “Whether he will be friendly or not I cannot say,” he added, bringing the message back to the pope’s unpredictability.

Pay attention to the audience, he said. “Popes tend to say different things depending on whether it’s bishops, political leaders or ordinary Catholics,” he said. On one hot-button issue, same-sex marriage, for example, “It will make a difference if it comes at the U.S. Capitol or in Philadelphia at the World Meeting of Families.”

Same thing applies to Cuba and the embargo. “I imagine he will talk about it,” the veteran Vatican reporter said. “But where? At the Capitol, or the U.N., or in Congress, which has the power to lift the embargo?”
One prediction from Thavis: “He is coming from one of the poorest countries in the world to one of the richest. I don’t think he’ll ignore that.”

Basilian Father Thomas Rosica, a Rochester native who since 2013 has served as English-language assistant to the Holy See Press Office, confirmed the pope’s unpredictable nature. “He is completely free in what he does,” he said. “There is nothing calculated about his moves. This causes angst — or as they say in Italy, agita — for people.”

His mission, Father Rosica said, is clear: “He’s come to speak the Gospel. The only revolution he’s speaking of is the revolution of tenderness. This is a peacemaker that is coming to us. This is a good news story. Let him speak and bring a message of hope.”