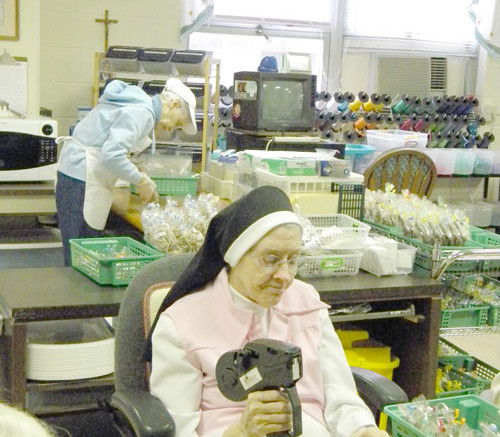 Now imagine sitting in this room all day long — during Lent.

For the retired Sisters of St. Francis working at NunBetter candy store in Syracuse, there’s no time to note the irony.

The sisters are working day and night to fill the orders for Easter candy that have been pouring in for weeks now. Working around a table at the back of the shop, they pour melted chocolate into molds, tie cellophane bags, and curl ribbons to prepare the thousands of shiny, smooth and sugary confections that will bring delight on Easter morning.

“We make chocolate all day long every day, but at the holidays it’s still not enough,” said Sister Jane Bourne, OSF. She said the store probably goes through about 75 pounds of chocolate a week during the holidays. 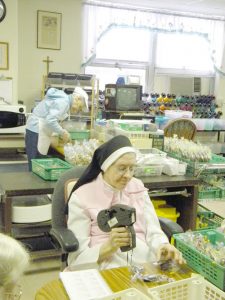 NunBetter is a business that is run by and for retired Sisters of St. Francis. It’s attached to Jolenta convent, so the sisters don’t have to go outside during the winter if they don’t want to. There are about 10 sisters working in shifts in the candy store now, and the money the store makes goes directly to benefit retired nuns.

“It got started because a lot of the religious communities were looking for something to bring in more income, so they were trying to find something to be a sound business,” Sister Jane said. “I was just doing it as a hobby — making baskets — so they asked me if I could do it with [the retired sisters].” There was a spare activity room, so the business opened there and has been humming along ever since. “Now I couldn’t do it without them,” Sister Jane said.

And as Easter looms, business is brisk. Sister Jane said she works until late at night these days in order to keep up with the extra orders on top of taking care of the normal day-to-day business.

Despite the demand, though, the sisters said they enjoy their work.

“It’s a nice social time for the sisters because most of them are pretty elderly, in their 80s and 90s,” Sister Jane said.

“It’s very relaxing and we have a great deal of fun while we’re working,” said Sister Bernice Eib, OSF. She has worked at NunBetter since it opened in 1981. Originally, she was a ribbon curler, then she moved up to weighing, and now she wields the pricing gun.

She said the sisters sit and chat about politics, the weather, local events, “and sports!” the others at the table called out. There are some fierce S.U. supporters sitting around the table at NunBetter, and Sister Bernice is one of them.

As Sister Bernice priced chocolate lollipops, Sister Jean Marie Teixeira, OSF, poured long ribbons of chocolate into rabbit-shaped molds. There are thousands of different chocolate molds available in the store. From hearts to hammers to flip flops, the molds fill big cardboard boxes along an entire wall in the back of the store.

“You name it, we’ve got it,” said Sister Frances Ann Cimino, OSF.

The store even has a mold of Bishop Robert J. Cunningham’s coat of arms. “The bishop loves chocolate,” Sister Jane said.

While some of the sisters said they don’t quite have the same taste for chocolate that they once did, they all still remember the sheer joy that Easter morning brought when they were children.

Sister M. Barbara Kardos, OSF, remembered well the main attraction of her Easter basket. “A sugar egg,” she said, holding her hands up to show the size. “A white sugar egg, and it had a window, and the window always had a picture in it of an Easter bunny or a little girl.”

“My mother used to buy us these chocolate eggs with silver candies on the top of them,” said Sister Mary Jude Stewart, OSF. “And we had them all eaten by noontime.”

For Sister Patrice Ward, OSF, she remembers being able to cast off winter wools for special spring clothes. “And in those days, you had to fast from midnight,” she said, and that fast made the candy all the sweeter.

Now, Sister Patrice curls the bright ribbons for children to pull off, making their own childhood memories. It’s a sweet ending after many weeks of hard work for the sisters.

Then it’s time to gear up for Mother’s Day.