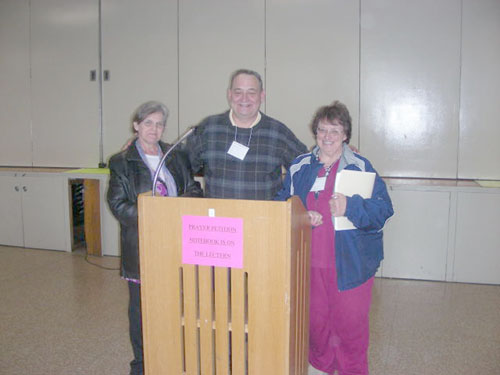 At a gathering of the Diocesan Pastoral Council (DPC) on March 20 at Bishop Grimes Jr./Sr. High School, representatives from several parishes offered various ways in which they evangelize.

DPC members also broke up into small discussion groups, garnering suggestions to offer Bishop Robert J. Cunningham that would help initiate a comprehensive evangelization process in the Syracuse Diocese’s parishes. The groups also pondered what they could do to welcome people at weekend liturgies.

Paul Lehmann, chair of the Parish Evangelization Committee, explained the evangelization effort that is underway at St. Mary’s in Hamilton and St. Joan of Arc in Morrisville.

“Father [Msgr. John] Madden kicked it off,” said Lehmann. “During St. Mary’s 140th anniversary and his 50th jubilee, he inspired us to look at ourselves and ask, ‘What are we doing?’ ‘Where we are going?’ and ‘What can we do differently?’ He wanted us to look at where we’re going to be in the future and he really coined the phrase ‘Sustaining Our Legacy.’”

Msgr. Madden sent a letter relaying this information to the parishioners and asked for their opinions, criticisms and complaints. “We got 50 to 60 letters,” said Lehmann. “We also had a meeting with those that were confirmed — we have focused this year on our youth, those people in confirmation programs. We need to speak in the youth’s language. For instance, we had one of the confirmation students invite everyone to the meeting through his Facebook page.” The meeting was successful. Over 25 youth shared their opinions on what works and doesn’t in the church. 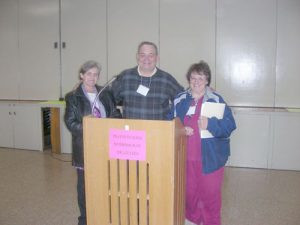 The parish’s first step in the evangelization process was to hold a generational workshop to explore the differences between the older and younger generations and how that impacts what the parish is trying to accomplish.

As a result of the meetings and workshops, many ideas were noted and considered. They include creating a flexible confirmation schedule, eliminating the confirmation schedule, having a monthly meeting or coffeehouse, finding young adult leaders, having adults share their stories, increasing interaction with Colgate’s Newman Center, changing the music, having a monthly youth Mass, scheduling later Masses for teens and holding events for teens.

Lehmann stated that in order to keep young people from leaving, the church needs to stay relevant and visible. “A lot of churches are being run by us baby boomers and we need to let go,” he said. “Our youth are making judgments about our church and faith. They need to work in a creative and independent environment.”

The parish has done numerous things that have had a large impact on sustaining its legacy. The parishioners held their annual picnic Mass, but this year they invited people who had fallen away from the church in addition to people from the Colgate community. They also designed tee shirts printed with the names of St. Mary’s and St. Joan of Arc. Lehmann said that the adults and children who wear the tee shirts out into the community reinforce the image and presence of the parish. The parishioners also created a float for the 4th of July community parade.

Lehmann said that as a parish goes through the process of evangelization, it is important to celebrate the positive practices that are already in place. He cited the examples of St. Mary’s/St. Joan’s coffee hour after Mass and a monthly dinner and movie program as great evangelization tools for the parish.

Other suggestions for facilitating the evangelization process included utilizing technology to relay positive messages, using the ever-evolving diocesan evangelization process, promoting the church to the world at large, being aware of opportunities to evangelize at bereavement and baptism and asking for input from the DPC.

Deacon Larry Brickner, Eileen Hills and Carol Foster, all parishioners at St. Lawrence Mission in DeRuyter, reenacted the liturgy at their church to demonstrate how they welcome people. A substantial number of people stand at the front of the church to welcome people as they arrive for Mass. Once inside, everyone is invited to meet after Mass for fellowship and refreshments. Throughout the Mass everyone’s unity with Christ is emphasized.

After the closing prayer, birthdays are announced, as well as anniversaries.

Vicar General Msgr. J. Robert Yeazel then gave a presentation on cremation. Cremation is permitted for Catholics as long as it is not chosen in denial of Christian teaching on the Resurrection and the sacredness of the human body. The cremated remains of a body are to buried or entombed, preferably in a Catholic cemetery, and using the rites provided by the Order of Christian Funerals.

Msgr. Yeazel stressed the importance of having a funeral or tribute for the deceased before the cremation. “It’s important to have a traditional funeral,” said Msgr. Yeazel. “We want to have a dignified remembrance of a person’s life ending and the beginning of a new one. It’s part of the grieving process.”

The meeting concluded with Bishop Cunningham stating, “There is nothing more important for us to discuss than evangelization. Everything we do as a church is meant to bring us together — by what we say and do. It has a lasting impact on people.”