After 60 years, visitor returns to her beloved St. Vincent’s 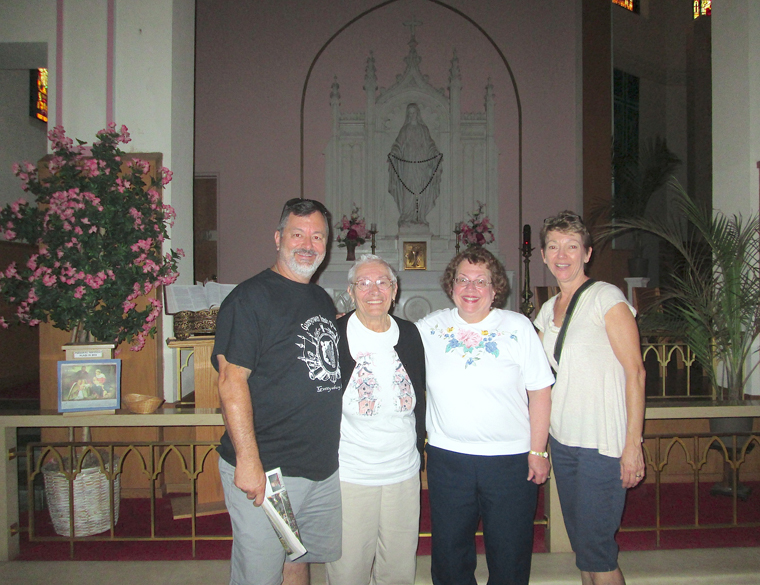 A hilltop church, St. Vincent de Paul has an allure that draws people back or compels them to visit for the first time.

On the sunny morning of June 28, a car from South Carolina pulled up and parked across the street. A man got out and sought entry. He had traveled 1,400 miles on a roundabout trip, and someone very important was eager to step inside the church for the first time in 60 years.

The man found parish secretary and bookkeeper Phyllis Egerbrecht, who was happy to unlock the church at 342 Vine St. for the group of Southerners.

In stepped Mary Alice Shinn, who was married at St. Vincent’s May 5, 1956. She had not been back inside the church for all those years.

Mary Alice, a cancer survivor who will turn 80 in February, has three sons; David is the one who brought her up here. Also admiring the church was David’s wife, Cheri. The visit also was part of an anniversary road trip for David and Cheri, who have been married for 34 years. David is the human resources director of the Arnold School of Public Health at the University of South Carolina, and Cheri is the executive assistant for the dean of the College of Arts and Sciences at the same university. All three visitors live in Columbia, S.C.

Asked for her thoughts, Mary Alice said, “It’s awesome, and so revering. I love it. I can’t believe it.”

She added: “This is always like home. This has got to be home. Yes, this is the first start of everything, I would say. … All of my childhood years are here. And of course after being married, I’ve got all those other memories.”

The day had an aura of coincidence, a sense of history. Egerbrecht said Mary Alice went to school with her husband’s cousin, Mary Egerbrecht.

“A lot of people will remember me, because my son’s been posting Facebook, everything we’ve been doing up here,” the matriarch from the Palmetto State said.

Egerbrecht has opened up the church for visitors before. “I had a seminarian one time that happened to see the church and stopped by and asked if he could come up and pray in here,” she said. “So I let him in.”

“We frequently have graduates of SV School from out of town who typically attend a weekend liturgy,” Father Rose said in an email. “The number of visitors testifies to their gratitude for the education they received from the Sisters of St. Joseph as well as the strength of the parochial schools that were a strong influence in their formation and experience of camaraderie.”

When Mary Alice went to St. Vincent’s School in the 1950s, the parish priests were Msgr. David Gildea, the pastor, and Fathers Vincent Donovan and Adam Smalley.

“It’s nice to come back to your childhood memories,” she said with great emotion, “and remember a lot of things. And this has been so rewarding to me.”

The church includes huge high stained glass windows and beautiful statues. On Mary Alice’s wedding day, though, it was a different scene. There had been a big fire in the church, so she had to get married in the school gymnasium.

According to a published report from the diocesan archives, an electric panel heater was investigated as a possible cause of the fire. The melted heater was removed from a confessional after the fire.

The bishop at the time, Bishop Walter A. Foery, wrote a letter dated Dec. 9, 1955, to the clergy and people of St. Vincent de Paul Parish.

“The whole diocese of Syracuse was stunned and shocked by the tragic news of the devastating fire which apparently has totally destroyed the parish church of our beloved St. Vincent’s,” the bishop wrote.

After their wedding in the gym, Carl T. Shinn, who was in the Navy, and Mary Alice Shinn moved to Virginia. They also lived in New Jersey for a little while, but Mary Alice said she has been living in the South, including various locales in Florida, for over 40 years. Carl died about five years ago.

“He was a good guy,” Mary Alice said of Carl. She is proud that her sons David and Carl served for more than 20 years in the military.

Mary Alice is helping to build a new church in Columbia, S.C., where she has lived for three years and where her youngest son, Stephen, also lives. Her oldest son, Carl, lives in Jacksonville, Fla. She has four grandchildren and six great-grandchildren. Her brother, Jack Baird, lives in Cicero, and her sister, Beverly Armstrong, lives in Syracuse.

The Southerners’ big road trip included stops in Gettysburg, New York City, New Jersey, and Niagara Falls. Mary Alice said she stayed in a 15th-floor room near the falls, and at nighttime she fell asleep to the sound of the water.

And just before arriving in Syracuse, the group of Southerners visited Mary Alice’s cousin Gail Roach in Tully.

The visitors arrived back home in South Carolina July 2.

“We had a wonderful time; I enjoyed everything,” Mary Alice said.

She added: “I got to see everybody, and it was marvelous.”

David agreed that the northern portion of the trip culminated at a worthy place: St. Vincent’s.

The Southerners and their honorary family member, Phyllis Egerbrecht, posed for pictures in front of the Blessed Mother’s side altar, which survived the 1955 fire.

“Our Blessed Lady of Lourdes will never forsake you.”