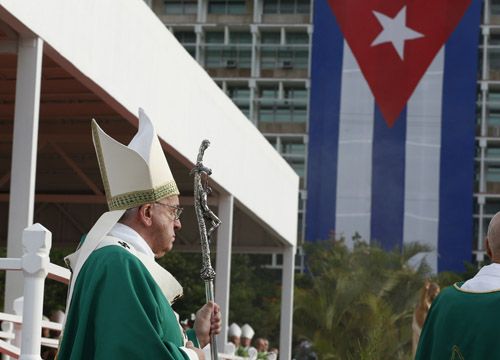 HAVANA (CNS) — Vatican officials ruled out a Pope Francis meeting in Cuba with representatives of the Colombian government and a Colombian rebel group, but the pope offered public prayers for the success of their peace talks.

“May the blood shed by thousands of innocent people during long decades of armed conflict, united to the blood of the Lord Jesus Christ crucified, sustain all the efforts being made” for peace, including the peace talks in Cuba, the pope said.

Reciting the Angelus after Mass Sept. 20 in Havana’s Revolution Square, the pope said, “We do not have the right to allow ourselves yet another failure on this path of peace and reconciliation.”

Representatives of the Revolutionary Armed Forces of Colombia, known by the Spanish acronym FARC, and of the Colombian government have been holding talks in Cuba since late 2012. Over the course of five decades, the fighting between guerrillas and government forces has claimed some 220,000 lives.

After the Mass in Havana, Pope Francis personally thanked Cuban President Raul Castro for hosting the peace talks, and he prayed that “the long night of pain and violence” in Colombia finally would give way to “an unending day of concord, justice, fraternity and love” with respect for the law, “so that there may be lasting peace.”