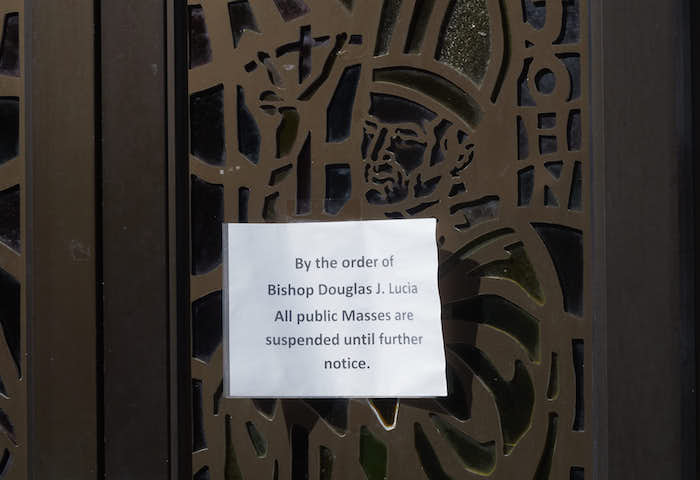 A sign hangs on the door of the Basilica of the Sacred Heart of Jesus in Syracuse in March. (Sun photo | Chuck Wainwright)

Some New York businesses have restarted operations after eight weeks of state-at-home orders, but Bishop Douglas J. Lucia says the diocese cannot yet resume public Masses. “We’re trying to balance the health of neighbor with people’s desire again to come together for worship,” he said in a May 15 video [watch below].

He pointed to state policy guiding his decision. “Congregate services within houses of worship are prohibited,” according to a May 16 memo on the New York state website. “Houses of worship may only be used by individuals and only where appropriate social distancing of, at least, six feet between people can be maintained. Further, individuals should not gather in houses of worship, homes, or other locations for religious services until the end of this public health emergency.”

The memo does not define under what conditions state officials would consider the public health emergency ended. Based on the state’s four-phase reopening plan, New York Forward, that’s at least six weeks away.

Bishop Lucia suspended public Masses March 16; all 22 diocesan Catholic schools were closed by March 18. New York has been under stay-at-home orders since March 22 as the coronavirus pandemic spread to the United States and diagnosed cases of COVID-19 increased exponentially. At least 3,382 COVID-19 cases and 178 deaths had been confirmed by May 19 in counties in the diocese. The largest numbers, 1,665 cases and 99 deaths, were in Onondaga County, the most populated county in the diocese.

The diocese’s seven counties fall in state regions in which businesses can resume operations — with restrictions including reduced occupancy and safety measures. Phase 1 began May 15 after regions met the state’s benchmarks, including a declining number of COVID hospitalizations and enough testing for officials to monitor spread of the disease.

Industries included in Phase 1 include construction, manufacturing, and retail (curbside or in-store pickup or drop off). If infections, hospitalizations, and deaths from COVID-19 continue to decline, additional sectors could reopen beginning May 30.

Houses of worship are not listed in the state’s four reopening phases, spurring some confusion last week. “Faith communities throughout the state are united in our willingness to partner with government to create a safe, socially distant experience in our houses of worship as we begin to reopen while still navigating this pandemic,” the New York State Catholic Conference, the public policy arm of the state’s eight bishops, tweeted May 15.

More guidance would be helpful, said Dennis Poust, director of communications for the New York State Catholic Conference. “We don’t see this as some infringement on our right to worship,” he said. “We see it as our shared moral responsibility to protect human life. We’re looking for dialogue and partnership.”

New York Budget Director Robert Mujica confirmed May 18 that houses of worship — with updated guidelines — could reopen in Phase 4. The state is also considering whether to permit small gatherings at houses of worship before then, he said during the briefing in Buffalo.

Delaying church services “has nothing to do with religion, it’s the gathering,” New York Gov. Andrew Cuomo said May 14. “Large gatherings have been where this started. …  The last thing we want is 100, 200 people in close proximity.”

One of the first outbreaks in the New York region started in New Rochelle, Westchester County. The novel coronavirus, which causes the respiratory illness COVID-19, spread to many people who attended Young Israel of New Rochelle, where a lawyer who had tested positive was a member. More than 100 families who attended a funeral and a bat mitzvah in late February came in contact with the lawyer and were ordered to self-quarantine.

Syracuse Mayor Ben Walsh and Onondaga County Executive Ryan McMahon said in press briefings May 14 they are considering options for opening churches for small events, including religious services and Memorial Day events. “Large [groups of] people together is a risk and we have to mitigate it,” Walsh said.

Bishop Lucia understands those concerns. “I am hearing from those who say please wait to reopen the churches until we know it is safe and others who are upset that they are unable to participate in Mass,” he said. “I understand it, but we must do all we can to keep people healthy.”

Caution about resuming public worship amid a worldwide pandemic does not reflect a church vs. state conflict but reminds people of their role as good citizens, the bishop said. “It is a serious public health issue,” he said. “I understand people’s frustrations, but right now we are working within the limitations that we have and are trying to provide what is best in a safe manner for our people.”

Bishop Lucia said he has not spoken with the governor’s office, although he is communicating with local officials. He is seeking feedback on a draft of diocesan reopening protocols from Matt Driscoll, regional captain of the Central New York Control Room. Driscoll, New York State Thruway executive director, served as Syracuse mayor from 2001 to 2009.

The bishop is also consulting with bishops in New York’s seven other dioceses. “Downstate is very different from the Central New York region,” he said. Different geography and demographics means each diocese will need its own protocols, he said.

A diocesan task force has been working since early May to develop guidelines for resuming public Masses. The group has drawn on guidance from a variety of sources, including its own medical professionals, state and local governments, the Thomistic Institute, the Federation of Diocesan Liturgical Commissions, the Centers for Disease Control and Prevention, the World Health Organization, and other dioceses.

About 60% of pastors have responded to an Office of Liturgy survey seeking information about parishes’ capacity and how pastors might reconfigure seating and schedules. Responses provide a general “idea of what’s possible in different parishes,” said Father Christopher Seibt, director.

Protocols will include general principles all parishes must follow, such as rules on social distancing and hygiene, followed by sacrament-by-sacrament breakdowns that include “some mandates, some recommendations, and some reminders,” Father Seibt said.

Father Seibt is eager to get back to celebrating public Masses. “I don’t know of any priest I’ve talked to who doesn’t want to,” he said. That eagerness is tempered by “a legitimate caution and legitimate concern for wanting to do it [reopening] well and properly.”

Some U.S. dioceses have already begun reopening parishes for public Mass. The Archdiocese of Portland, Oregon, resumed public Masses at some parishes May 9, but social distancing will be required and only 25 people are allowed at Mass.

The Archdiocese of Denver resumed Masses May 9 “in a limited and gradual way.” The Archdiocese of Oklahoma City and the Diocese of Tulsa jointly resumed Masses May 18; the Diocese of St. Petersburg, Florida, resumed weekday Masses May 11 with 25% occupancy. “If everyone does their part, we can be joyfully present, even as we adjust to these changes. For this moment in history, this is what we are called to do, as we honor each life given to us by God and show charity for the well-being of our neighbors,” Bishop Gregory L. Parkes of St. Petersburg said in a statement.

As countries in Europe began easing restrictions last week, churches there are resuming public Masses, too, Catholic News Service reports. Typical rules include limits on the size of the congregation; use of hand sanitizer by everyone before entering the church and by those distributing Communion immediately before doing so; no holy water in fonts; no exchange of a sign of peace; and Communion only in the hand.

In Italy, the public was allowed to attend liturgical celebrations starting May 18. Pope Francis celebrated 7 a.m. Mass at the tomb of St. John Paul II to mark the 100th anniversary of the Polish pope’s birth. At 8 a.m., the public was admitted to St. Peter’s Basilica for the first time since March 10.

The Vatican sanitation service placed hand-sanitizer dispensers at the end of the colonnade surrounding St. Peter’s Square. “Keep your distance” labels and tape on the cobblestone path lead to health and security checks before people can enter the basilica. At the public Mass, Communion was distributed in the hand only.

In the Syracuse Diocese, some churches have been open a few hours daily for private prayer, and most have livestreamed Masses and other parish events. Bishop Lucia’s daily 12:10 p.m. Mass at the Cathedral will continue to livestream at youtube.com/syrdio. Dispensation from the obligation to attend weekly Mass continues.

Bishop Lucia said he’s eager to see people return to Mass and urged them to make the best of the situation. “We know it’s not maybe what we all desire,” he said in the May 15 video. “It’s not perfect, it’s not something we may all like, but I hope it’s something that can at least nourish us.”