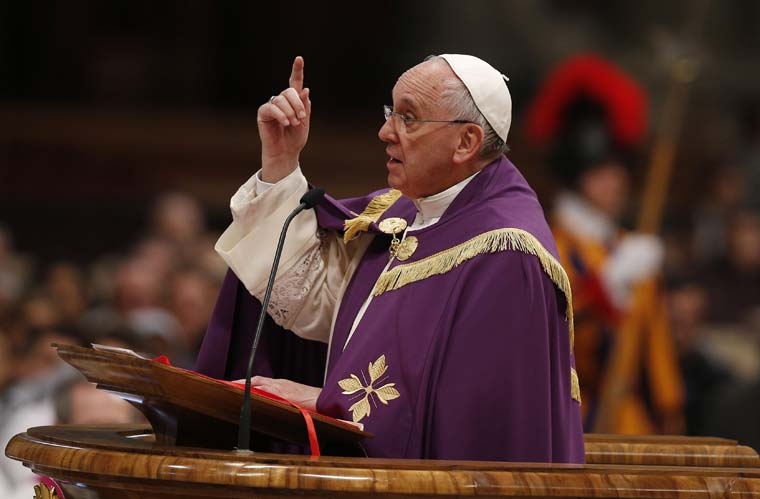 VATICAN CITY (CNS) — Pope Francis announced an extraordinary jubilee, a Holy Year of Mercy, to highlight the Catholic Church’s “mission to be a witness of mercy.”

“No one can be excluded from God’s mercy,” the pope said March 13, marking the second anniversary of his pontificate by leading a Lenten penance service in St. Peter’s Basilica.

“I frequently have thought about how the church can make more evident its mission to be a witness of mercy,” he said during his homily; that is why he decided to call a special Holy Year, which will be celebrated from Dec. 8, 2015, until Nov. 20, 2016.

The biblical theme of the year, he said, will be “Be merciful, just as your Father is merciful,” an admonition that applies “especially to confessors,” the pope said with a smile.

Traditionally, every 25 years the popes proclaim a holy year, which features special celebrations and pilgrimages, strong calls for conversion and repentance, and the offer of special opportunities to experience God’s grace through the sacraments, especially confession. Extraordinary holy years, like the Holy Year of Mercy, are less frequent, but offer the same opportunities for spiritual growth.

The doors of the church “are wide open so that all those who are touched by grace can find the certainty of forgiveness,” Pope Francis said at the penance service, which featured individual confessions. It was part of a worldwide celebration of “24 Hours for the Lord,” in which Catholic churches were staying open for prayer, Eucharistic adoration and confession.

At each of the dozens of confessionals in St. Peter’s Basilica, as well as in simple chairs scattered along the walls, priests welcomed people to the sacrament. The pope removed his liturgical vestments and went to confession before putting on a purple stole and hearing the confessions of others.

“God never ceases to demonstrate the richness of his mercy over the course of centuries,” the pope said in his homily, which preceded the confessions. God touches people’s hearts with his grace, filling them with repentance and a desire to “experience his love.”

“Being touched by the tenderness of his hand,” people should not be afraid to approach a priest and confess their sins, he said. In the confessional, one has “the certainty of being welcomed in the name of God and understood, despite our misery.”

The Gospel reading at the penance service was the story of the sinful woman who washed Jesus’ feet with her tears and dried them with her hair. Every time one goes to confession, the pope said, “we feel the same compassionate gaze of Jesus” that she did.

Jesus’ love, he said, allowed her to draw near, to demonstrate her repentance and to show her love for him. “Every gesture of this woman speaks of love and expresses her desire to have an unshakable certainty in her life, that of having been forgiven.”

“Love and forgiveness are simultaneous” in the story of each person, just as in the story of the sinful woman, he said. “God forgave her for much — for everything — because he loved her much.”

Through Jesus, the pope said, God took the woman’s sins and “threw them over his shoulder, he no longer remembers them.”

Jesus’ encounter with the woman took place in the home of a Pharisee named Simon. Unlike the woman, the pope said, Simon “isn’t able to find the path of love. He remains stopped at the threshold of formality. He is not able to take the next step to encounter Jesus, who brings salvation.”

The Pharisee is concerned only with following God’s law, with justice, which is a mistake, the pope said. “His judgment of the woman distances him from the truth and prevents him from understanding who his guest is.”

Jesus scolds Simon, pointing out how the “sinful woman” has shown nothing but love and repentance, the pope said. “Jesus’ rebuke pushes each of us to never stop at the surface of things, especially when dealing with a person. We are called to look deeper, to focus on the heart in order to see how much generosity the person is capable of.”

Pope Francis said he asked the Pontifical Council for Promoting New Evangelization to coordinate preparations for the Holy Year so that it would be “a new stage in the church’s journey in fulfilling its mission of bringing the Gospel of mercy to each person.”

You are invited to receive the Sacrament of Reconciliation

Ready to lay down your burdens and feel the “compassionate gaze of Jesus” Pope Francis preached about?
On March 30, churches throughout the diocese will be open from 4 p.m. to 7 p.m., offering Catholics an opportunity to receive the Sacrament of Reconciliation. The evening of penance is part of the diocese’s annual “The Light is On for You” campaign, which urges Catholics to return to and receive the sacrament.
If it has been a while since your last Confession and you need a refresher, take a look at the diocese’s “How to Make a Good Confession” video, featuring Father John Manno of St. James Parish in Syracuse — you can find it on Syracuse Catholic Television’s YouTube channel at www.youtube.com/user/syrdio. For even more on Confession, visit http://syracusediocese.org/parishes/parish-and-family-resources/lent/.