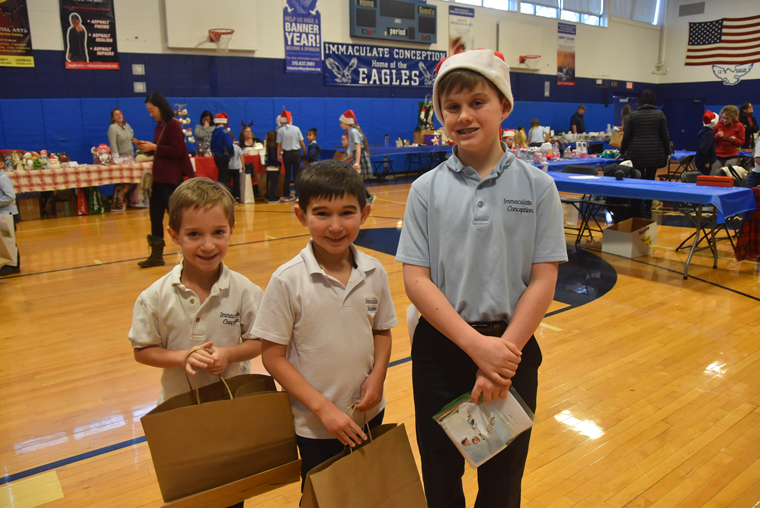 FAYETTEVILLE — Pupils at Immaculate Conception School showed their generosity and leadership during the Christmas season.

Fifth- and sixth-graders made Christmas ornaments that they donated to St. Joseph’s Hospital and fleece blankets that they donated to Project Linus, which seeks to comfort children who are seriously ill, traumatized, or otherwise in need. A schoolwide collection of toiletries was packaged individually by the fifth- and sixth-graders and donated to St. Lucy’s. The whole school also donated wrapped gifts to the families at Cathedral Academy at Pompei (CAP). Mittens and hats were also donated to CAP. The fifth grade also sold handmade ornaments and Christmas items and donated the proceeds to a local charity.

Sixth-graders Audrey Schaefer, Sofia Sheehan, and Ella Tallarico spread Christmas cheer to pupils in pre-K 3 to second grade. They went around with their Candy Cane Express cart, handed out candy canes, and explained that candy canes are in the shape of the letter “J.”

The Home & School Association hosted the annual Santa’s workshop where local vendors sold affordable crafts for the student shoppers. The fifth-graders sold crafts they had made, with the proceeds going to a local charity. The big buddies paired up with their respective classes to help in their shopping. A number of parent volunteers helped at the free gift-wrapping tables.

Kindergartners Gianni Bruno, left, and Paul Mullin are set for some shopping with their sixth-grade buddy, Ryan Hayden.