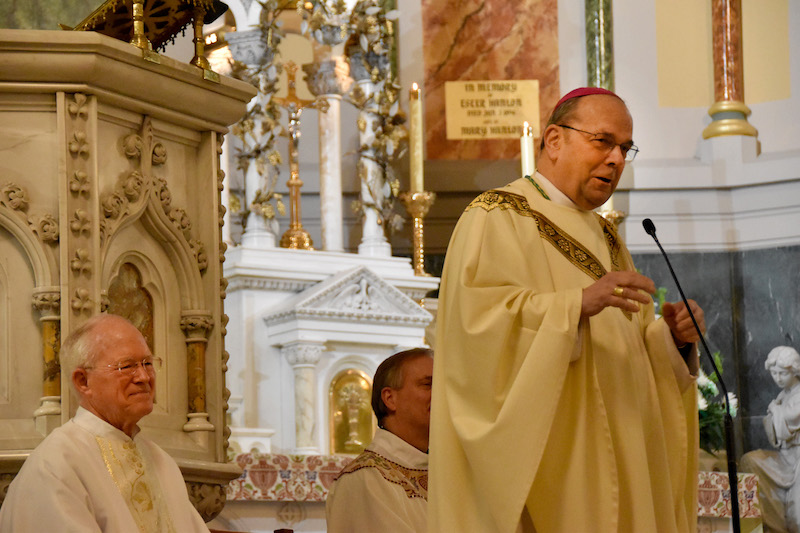 Bishop Robert J. Cunningham, with Deacon Edward W. Kernan at left and Father Jon K. Werner in the background, says of Msgr. John P. Flanagan, who died Feb. 9: “Everybody was happy with him. … Father Flanagan gave us a wonderful example.” The bishop was the principal celebrant at Msgr. Flanagan’s funeral Feb. 14, 2019. (Sun photo | Tom Maguire) 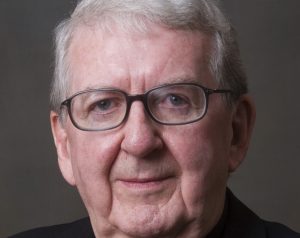 Msgr. John P. Flanagan, who died Feb. 9 at the age of 85, wondered if anybody would remember him, his longtime friend Father Jon K. Werner said. The monsignor’s well-attended funeral, including more than 20 members of the clergy, proved that the people remember him with fondness.

Bishop Robert J. Cunningham presided at the Mass on Feb. 14 at Historic Old St. John’s Church in Utica. When a priest dies, the bishop reviews his file. “I was thrilled to see that Msgr. [James M.] Kennedy who is here this morning was the deacon at Father Flanagan’s first Mass,” the bishop said, drawing applause.

He continued: “And Father [John S.] Finnegan … was the subdeacon in days when we had subdeacons. So it’s a wonderful thing. But I’ll tell you that it’s a wonderful experience reading through Father Flanagan’s file, seeing all the places he has been and all the things he had done in 60 years of priestly life.

“And … there wasn’t a single letter of complaint in it,” the bishop added, drawing laughter and applause. “Everybody loved Father Flanagan. … It’s interesting to note that the only letters in the file that were critical were always critical of the bishop for transferring him.”

Msgr. Flanagan was born on July 26, 1933, in Syracuse, where he belonged to St. Patrick’s Church. Ordained on Feb. 2, 1959, he served as a diocesan priest in Camden, Mattydale, Utica, Whitesboro, and Norwich, and his service included the chaplaincy of the Spanish Apostolate. He came to Historic Old St. John’s as associate pastor in 1975 and became pastor in 1976. He stayed until 1993 when he became pastor of St. Paul’s in Norwich. In 2006 he was named Chaplain to His Holiness. He retired on Feb. 23, 2011, and helped out where he was needed as the parochial vicar at large.

‘THE TENDER CARE OF GOD’

Bishop Cunningham said that in an encyclical letter, Pope Emeritus Benedict XVI said the Church is most the Church when it preaches the Gospel, celebrates the sacraments, and reaches out in love to those who are in need.

“Father Flanagan did that to a remarkable degree,” the bishop said. He added: “So now we commend him to the tender care of God, asking that the angels speed him on his journey, and that God welcome him to his warm embrace.” 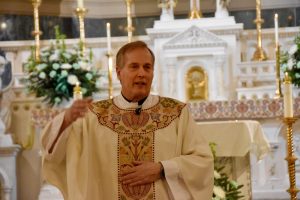 The homilist, Father Werner, pastor of St. Paul and St. Mary of the Assumption churches in Binghamton, praised the choir’s performance at the Mass. He said he was a teenager when he met Msgr. Flanagan in Utica, where the monsignor taught religion classes at Our Lady of Lourdes. “We would go to play basketball,” Father Werner said, “but he would always make us read the Gospel and talk about the Gospel for a minute; then he’d let us go play in the gym.”

He remembers the monsignor as always patient and kind as far as the kids’ shenanigans: “He would correct us, but in the most gentle way. And for years we would sneak ice cream bars out of the freezer in the school. And we thought we were getting away with it. … But he would go over next day and pay for ’em all.”

In his youth Father Werner observed the ways of Msgr. Flanagan. “It was just something that I thought I should try, so I went to seminary and it fit,” he said, “and I’m still here.”

Msgr. Flanagan did not have a fire and brimstone approach, his longtime friend said: “He was held up in seminary because he had such a soft voice, nobody could hear him. So he took voice lessons to improve his speaking. But he was always very gentle with people and encouraging. … He was always compassion, care, love, God’s forgiveness, come home.”

‘A LOT OF WORKER BEES’

Father Werner noted that the monsignor felt it was OK to leave and go to Norwich because he did not want to be selfish in keeping Historic Old St. John’s for himself. The historic church had “a lot of worker bees,” Father Werner explained: people who helped the poor and ran a Christmas program, a big food-basket program, and a program for people who were deinstitutionalized in the 1970s.

As the parochial vicar at large, Father Werner said, Msgr. Flanagan lived at Historic Old St. John’s and helped at various parishes. “He loved doing that,” Father Werner said, “and not having to worry about the roof, the painting or cleaning, or personnel, finances, all that stuff — just be a priest.”

He said the monsignor had dementia and took a turn for the worse about a week before he died at the Masonic Care Community of New York in Utica.

“He was a humble man with a beautiful heart,” said Gary Givonetti, in charge of maintenance at Historic Old St. John’s. He added: “He got mad when I helped him with things — that’s how humble he was. He wanted to help me paint. … I’ve never heard a negative comment about Msgr. Flanagan.”

Givonetti said people reported that in confession, the monsignor would say: “Now tell me some of the good things about you.” And the monsignor preferred to be called “Father,” Givonetti recalled.

“He was a humble priest; I’ve never met a priest that exuded Jesus like he did,” agreed Mary Anne Kahler, who is originally from Utica and lives in Oriskany now. She explained: “Just kindness, compassion, love. He would do anything for anybody. And he knew my grandfather was sick, and he came over to the house and said Mass a few times for him and for us. …

“And I was thinking as I was on my way here that it was nice that he had his Mass on Valentine’s Day, because that’s a symbol of love and he just [had] Christ’s love in him.”

As the people exited the church, the choir sang “When Irish Eyes Are Smiling.”

“I was crying,” Kahler said.