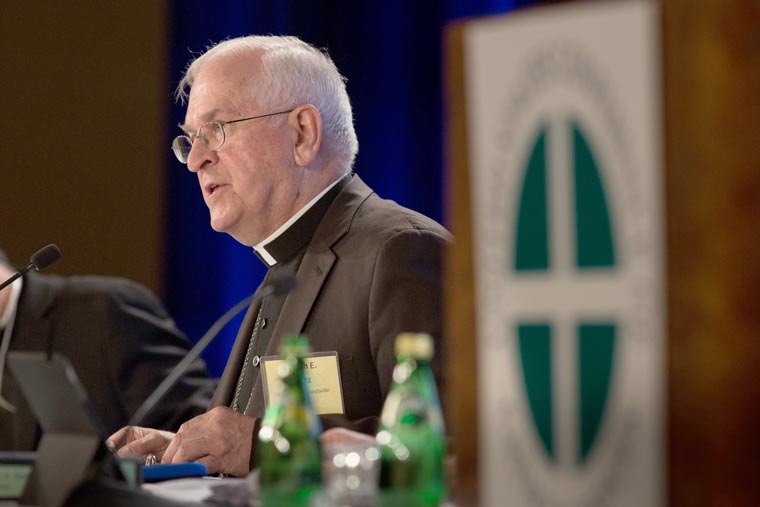 ST. LOUIS (CNS) — The U.S. bishops gathered in St. Louis for their spring general assembly heard presentations on the pope’s upcoming encyclical on the environment, the U.S. church’s ongoing work in promoting traditional marriage and the need to remain vigilant in protecting children from abuse.

Hot topics and priorities
On the first day of their meeting June 10, there also were reports on the bishops’ efforts to advocate for comprehensive immigration reform and their help in rebuilding work in Haiti, which is still recovering from the 2010 earthquake.
In the second day of the assembly’s public sessions June 11, the bishops heard a report on a draft for priorities and plans for the U.S. Conference of Catholic Bishops for 2017-2020. The report, which was up for a vote, started a lively discussion about what the bishops’ top focus should be.
Several bishops spoke up about the need to put concern for poverty at the top of the list to keep in line with the message and ministry of Pope Francis. The bishops voted to rework the draft document, incorporating the feedback given.
In a 165-5 vote, the bishops approved the inclusion of revised canticles for the Liturgy of the Hours for use in U.S. dioceses. It required a two-thirds vote of the Latin Church members of the USCCB. The bishops also voted to permit the Committee on Clergy, Consecrated Life and Vocations to seek a renewed recognitio, or approval, from the Vatican for the USCCB’s “Program of Priestly Formation, Fifth Edition” for an additional five-year period without any changes to the norms.
In an afternoon presentation, married couples talked to the bishops about how they can encourage the vocation of marriage in their dioceses. The bishops also heard from Curtis Martin, founder and CEO of FOCUS, the Fellowship of Catholic University Students. He encouraged them to continue to lead young people to live the Gospel message.

Papal encyclical
During the two daylong public sessions of the June 10-12 assembly, there was a lot of discussion on the much-anticipated arrival of Pope Francis in September for the World Meeting of Families and other stops and other upcoming gatherings, such as next year’s World Youth Day in Krakow, Poland and a 2017 convocation.
The bishops also were urged to keep pace with technological advances as a means to spread the Gospel message and advised to keep the “digital doors” of the church open.
In the discussion of the pope’s upcoming encyclical on the environment and human ecology, eight days before its scheduled release, the bishops were called on to help Catholics understand its message.
Pope Francis will challenge the assumptions of “both the left and the right” with the document, said Bishop Oscar Cantu of Las Cruces, New Mexico, chairman of the U.S. Bishops’ Committee on International Justice and Peace.
He also said it would have international implications, particularly regarding solidarity with the world’s poor.
Miami Archbishop Thomas G. Wenski, chairman of the Committee on Domestic Justice and Human Development, said the document will likely highlight climate change as “a moral issue,” pointing out that the poor suffer the most from consequences of improper care of the environment even though “they have contributed the least to climate change.”
He said the pope would not be speaking as a scientist or a politician but as a shepherd and that the bishops, who “aren’t novices” on care for the environment, can’t “opt out” of this conversation.

Traditional marriage
Addressing the pending U.S. Supreme Court ruling on same-sex marriage, expected in late June, Archbishop Salvatore J. Cordileone of San Francisco said that no matter how the court rules, it “won’t change traditional marriage” and the bishops will continue to defend it as the church teaches.
Archbishop Joseph E. Kurtz of Louisville, Kentucky, president of the U.S. Conference of Catholic Bishops, praised the “courageous leadership” of Archbishop Cordileone in the effort and the bishops gave him a sustained round of applause.

Pope Francis’ U.S. visit
A major topic of the day was Pope Francis’ September visit to the U.S. Philadelphia Archbishop Charles J. Chaput said the Sept. 22-27 World Meeting of Families — the pope will be there for the last two days — is expected to draw the most participants from the U.S., Canada, Vietnam and the Dominican Republic. He also said an expected crowd of more than 1 million will be in Philadelphia.
A message to the pope from the bishops, which was read to the assembly, stressed how they looked forward to meeting him and would “accompany him in prayer” in his visit.
A few of the bishops told reporters in an afternoon news conference that they hoped the pope would address religious liberty and immigration reform during his U.S. visit.

Protecting children
In their morning session, the bishops did not specifically address the June 10 announcement from the Vatican about a new process for holding bishops accountable for protecting children from abuse, but in response to a reporter’s question about it, it was clear they welcomed and supported the Vatican action.
“We have a long track record of wanting to help the bishops be transparent” in their efforts to protect children, said Archbishop Kurtz.

Race relations
At the start of the meeting, the USCCB’s president noted that for their spring meeting, the bishops were gathered not far from Ferguson and that the bishops’ November general assembly will be in Baltimore — two places roiled in past months by protests, violence in the streets and looting following the deaths of two young African-Americans after confrontations with white police officers.
Archbishop Kurtz urged the bishops to encourage Catholics to take concrete measures to help end racism, including praying for peace and healing, promoting justice for all people, being “truly welcoming” of families of different racial and religious backgrounds. People also should get to know their community’s law enforcement officers, he said.

Immigration and migration
Auxiliary Bishop Eusebio L. Elizondo of Seattle, chairman of the Committee on Migration, encouraged the bishops to visit immigrant detention centers in their dioceses to better understand the conditions under which immigrants who enter the country without documents are being held.
He said his committee has been advocating for migrants who might be eligible for asylum or other forms of legal status in the U.S., and pushing for a dramatic increase in the number of refugees from Syria, especially, and others who are fleeing their countries due to religious persecution.
He said a pervasive concern is that new interdiction efforts in Mexico to turn back Central American migrants before they can reach the U.S. border mean that many people who would be eligible for asylum in the U.S. instead are summarily sent back to their home countries.
“This is a violation of international law,” said Bishop Elizondo, adding that the committee and its USCCB staff are raising the issue with the U.S. government.

International efforts
In a report, for the Subcommittee on the Church in Latin America, Bishop Elizondo said diocesan donations have helped rebuild structures in Haiti and coordinate adult literacy teacher training programs.
The work has been “accomplished with transparency and accountability,” he said, adding that it is something the bishops should be proud of even as they also recognize there is “still so much more to d
o.”

Digital communications
At times during the meeting, the bishops could be seen checking their tablets or smartphones, scrolling for messages. Such was the case for Archbishop John C. Wester of Santa Fe, New Mexico, chairman of the U.S. Bishops’ Committee on Communications.
Modern communications are “evolving at a dizzying rate,” the archbishop said in his committee report. He urged the bishops to reach out to Catholics where they are — online. To help them in that effort, he said, the USCCB would be launching a Catholic Church app this summer, something the bishops can make particular use of during the pope’s visit.

Looking ahead
The bishops were not only urged to prepare for the papal visit but also to think ahead and plan to attend World Youth Day next year in Krakow and participate in a 2017 convocation on the life and dignity of the human person in Orlando, Florida.
At the conclusion of a full day of reports, the bishops concelebrated Mass at the Cathedral Basilica of St. Louis.
In his homily, Archbishop Kurtz reminded the bishops that St. John Paul II led a vesper service in that cathedral during his 1999 visit and he spoke of the cathedral’s striking beauty.
He added that the bishops, in their work to promote human dignity, marriage, human ecology and an end to racism, have the opportunity to communicate and share God’s beauty with the world.