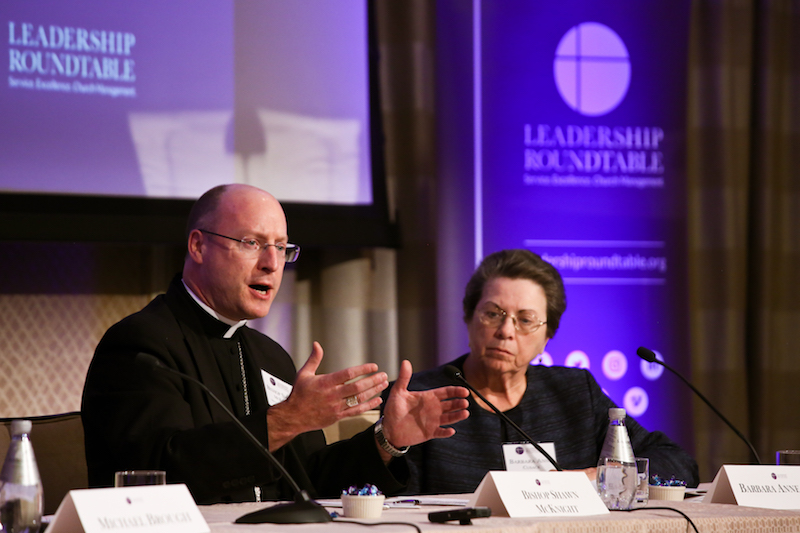 Bishop W. Shawn McKnight of Jefferson City, Mo., pictured in a Feb. 1, 2019, photo, said he’s “hopeful we will have some progress made in moving the football” on the church’s response to the abuse crisis by approving several proposals to hold the bishops accountable. (CNS photo | Ralph Alswang, courtesy Leadership Roundtable)

WASHINGTON (CNS) — When the bishops gather in Baltimore starting June 11, Bishop W. Shawn McKnight of Jefferson City, Missouri, said he’s “hopeful we will have some progress made in moving the football” on the church’s response to the abuse crisis by approving several proposals to hold the bishops accountable.

“I think the recent new norms from Holy Father will make it more possible, but I am waiting to see and I will be fully involved in the debate,” he told Catholic News Service June 7.

The centerpiece of the bishops’ agenda will be four action items dealing with the investigation of abuse claims against bishops themselves or accusations they have been negligent in handling or covering up cases of wayward priests and other church workers.

These proposals were before the bishops at the fall general assembly last November, but the Vatican requested they delay action on them until after the Vatican held a February meeting for presidents of bishops’ conferences worldwide to discuss the abuse crisis.

The norms Bishop McKnight referenced are contained in Pope Francis’ “motu proprio,” released May 9 and in effect as of June 1. The document, titled “Vos estis lux mundi” (“You are the light of the world”), is a new universal law from the pope to safeguard its members from abuse and hold its leaders accountable. It governs complaints against clergy or church leaders regarding the sexual abuse of minors or vulnerable persons. The U.S. bishops will vote on directives for implementing this church law.

The full texts of the pope’s “motu proprio” and the U.S. Conference of Catholic Bishops’ “Charter for the Protection of Children and Young People,” as well as the new reforms to be discussed in Baltimore, are available on a new website the USCCB launched June 7: www.usccbprevention.org.

The pope’s new juridical instrument calls for a “public, stable and easily accessible” reporting system for allegations; clear standards for the pastoral support of victims and their families; timeliness and thoroughness of investigations; whistleblower protection for those making allegations; and the use of “proven experts from among the laity”; and the oversight of the metropolitan (archbishop) for such investigations in his province. The U.S. Catholic Church has 32 metropolitans.

Under each archdiocese are dioceses, also called suffragan sees, for which a metropolitan is responsible.

“For me the critical element in the effort to respond to the crisis is the necessity of lay involvement,” Bishop McKnight told CNS. “I am grateful the document allows for the metropolitan to use lay experts.”

Just as dioceses have a lay board to assess allegations against priests and other church workers, the same lay-led review is needed for bishops for two reasons, Bishop McKnight said. “First, for transparency to build credibility in the process so people know it is not just miters and collars but mothers and fathers (looking at these allegations) as well.”

“Second, as a bishop myself, if there was ever a false allegation made against me, I would want an independent lay assessment of the investigation to build credibility (in the finding) that the claim is not credible.”

Two other prelates interviewed by CNS ahead of the bishops’ spring assembly — Bishop Edward J. Weisenburger of Tucson, Arizona, and Archbishop Alexander K. Sample of Portland, Oregon — also strongly emphasized the need for lay involvement in reviewing claims against bishops.

“I cannot imagine there not being a majority of lay involvement,” Bishop Weisenburger said June 7. “The current model of diocesan review boards owes a substantial part of their success to the fact that they are lay-led and lay-driven. That fact is not lost on any bishop.”

In the Tucson Diocese, “we have had tremendous success in working with our Diocesan Review Board,” he noted.

“I feel certain that my brother bishops will strive to create regional lists of experts that are composed in majority of lay experts in the fields of law, law enforcement, psychology, education, canon law and social work,” Bishop Weisenburger added.

Said Archbishop Sample: “Clearly the cry for more lay involvement is not just among laity but priests and bishops (too). … For my part, I will do everything I can — and I am just one bishop among many — to ensure that there will be an adequate role for the laity to be involved in these investigations within these church processes. The ‘motu proprio’ certainly opens the door (to this).”

“Quite honestly I hope this is one of the areas we can strengthen. … I hope we will be able to enshrine within our own (structures) an active and significant role for the laity,” he said.

Going into the assembly, “my hopes and expectations are optimistic,” the archbishop added, “I wouldn’t say super-high but I’m very optimistic the bishops will be able to complete next week what we tried to begin at our November meeting in light of the new ‘motu proprio,’ (which is) further guidance on what we should be doing to take responsibility for this crisis in the church and respond to it.”

“I hope that there will be some good modifications and amendments to the documents” he said, to strengthen them especially with regard to “transparency and accountability, the two words that resonate most with me right now going into this meeting.”

The bishops must have effective protocols that enable them to hold each accountable, which is “really what Christ asks of us as shepherds of the church,” Archbishop Sample said. “We also need accountability before the people of God.”

As for the proposal for metropolitan oversight, the archbishop said that as metropolitan himself, he takes this charge “extremely seriously.”

“I think the Holy Father’s intention in the ‘motu proprio’ he issued is that the church use her own structures which are already in place to really address these issues in a significant way, and the role of the metropolitan archbishops is a grave responsibility,” he said.

Since the November meeting, when the metropolitan “option” surfaced, “I’ve given it a lot of reflection and I’m overwhelmed a little bit to receive this responsibility … and I pledge that I will do everything I can do to ensure there is full accountability in my realm of influence,” Archbishop Sample said.

“To the eyes of some it looks like the bishops are investigating themselves again and that this is what has gotten us into this mess in the first place,” he remarked.

However, it is important for people “to know and understand” that “using the church’s own structures is what the Holy Father intends,” he explained, and the church’s way of dealing with allegations — “within the church law and structures” — is carried out “without any prejudice” to civil authorities doing their own investigation.

“Both of these tracks have to run parallel, because in the end the church still has to deal with the status” of its own members, he said. “We need our own structure to deal with them” but this does not “hamper” what civil authorities must do on these abuse cases.

“On the one hand it’s true to our history, who we are as a hierarchic church,” he said. “On the other hand, it’s a somewhat new adaptation which I think will allow general principles of investigation to be applied in a healthy local manner. The time limits related to the various steps are especially helpful as it prevents a critical investigation from being delayed.”

When he looks at his region, whose metropolitan is the archbishop of Santa Fe, New Mexico, he said: “I trust that we have a wealth of experts who could come together and undertake an investigation in a timely and professional manner. I think something good for the church is unfolding before us.”

Last fall, when the Vatican asked the bishops’ to postpone voting on these critical abuse protocols, many felt the church was just stalling on the need to address issues of the hierarchy’s accountability, but Bishop Weisenburger feels “the November delay proved beneficial.”

“There was tremendous pressure for the bishops to create an immediate response to the situation — I felt that pressure myself — but in retrospect I’m not sure we make the best decisions when we move that fast,” he told CNS. “I think the Vatican summit helped clarify some of the critical issues. I now think it’s time for the U.S. bishops to come to a consensus on a procedure that can be undertaken easily when a report needs to be made about an allegation against a bishop.”

Bishop McKnight told CNS the laity in his diocese have given him “a consistent message” about the abuse scandal in listening sessions he has held, both this spring in preparation for his “ad limina” report to Rome and last fall ahead of the bishops’ November meeting: That message is to “get it all out now,” rather than this piecemeal approach to revelations about abuse, past or present.

One of his big questions about the McCarrick scandal, he said, is why haven’t members of the hierarchy “who were knowledgeable and complicit in his promotion” just come forward on their own and take responsibility?

“This does not require an investigation or special adjustment of canon law,” Bishop McKnight said. “I understand and feel the frustration of the laity.”