Blessed Romero ‘another brilliant star’ belonging to church of Americas 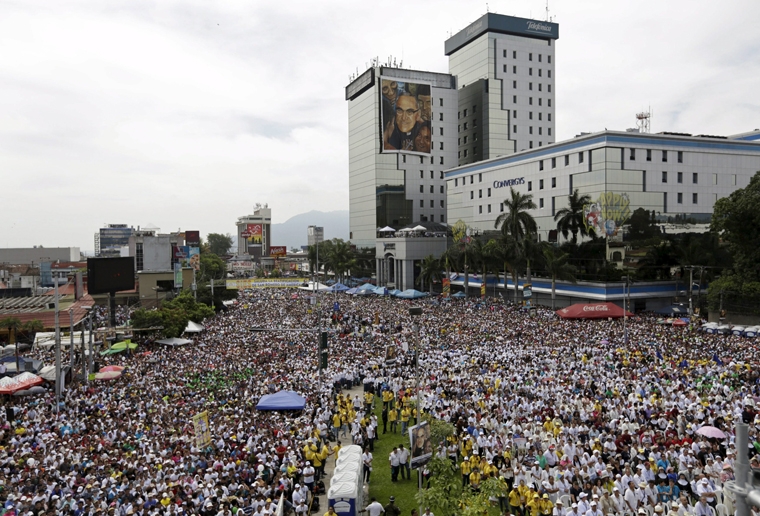 SAN SALVADOR, El Salvador (CNS) — Some thought this day would never arrive. Others hoped and some always knew it would.

On May 23, the Catholic Church beatified Archbishop Oscar Arnulfo Romero y Galdamez, of El Salvador, who was assassinated in 1980 while celebrating Mass, just a day after pleading and ordering soldiers to stop killing innocent civilians.

“Blessed Romero is another brilliant star that belongs to the sanctity of the church of the Americas,” said Cardinal Angelo Amato, head of the Vatican’s Congregation for Saints’ Causes, during the ceremony in San Salvador. “And thanks be to God, there are many.”

While those who persecuted him have died or are in obscurity, “the memory of Romero continues to live in the poor and the marginalized,” Cardinal Amato said.

Archbishop Romero’s homilies often pleaded for better conditions for the poor, for a stop to the escalating violence in the country and for brotherhood among those whose divisions ultimately led to a 12-year conflict.

He’s not a symbol of division but one of peace, Cardinal Amato said.

In a message sent Saturday on the occasion of the beatification, Pope Francis said that Archbishop Romero “built the peace with the power of love, gave testimony of the faith with his life.”

Proof of that is the shirt he died in, soaked in blood, after an assassin’s single bullet took his life. Eight deacons carried the blood-stained shirt, now a relic, to the altar in a glass case. Others decorated it with flowers and candles during the Saturday ceremony. Several priests reached out to touch the case and later made the sign of the cross.

In a time of difficulty in El Salvador, Archbishop Romero knew “how to guide, defend and protect his flock, remaining faithful to the Gospel and in communion with the whole church,” the pope said in his message. “His ministry was distinguished by a particular attention to the poor and marginalized. And at the time of his death, while celebrating the holy sacrifice, love and reconciliation, he received the grace to be fully identified with the one who gave his life for his sheep.”

The event, at the square of the Divine Savior of the World in the capital city of San Salvador, saw the attendance of four Latin American presidents and six cardinals, including Oscar Andres Rodriguez Maradiaga of Honduras, Leopoldo Brenes of Nicaragua, Jaime Ortega of Cuba, Jose Luis Lacunza of Panama, Roger Mahony of the U.S., as well as Italian Cardinal Amato and Italian Archbishop Vincenzo Paglia, postulator of Archbishop Romero’s cause.

Their excitement couldn’t have been greater than that of those like Father Estefan Turcios, pastor of El Salvador’s St. Anthony of Padua Catholic Church in Soyapango and national director of the Pontifical Mission Societies in El Salvador. Before El Salvador’s conflict, Father Turcios was imprisoned for defending the rights of the poor. Archbishop Romero helped free him.

“There have been people inspired by Romero for 35 years. How do you think they feel right now?” asked Father Turcios.

But just as he has devotees, Archbishop Romero has had detractors.

After his death, the Vatican received mounds of letters against Archbishop Romero, Archbishop Paglia has said. And that affected his path toward sainthood, which includes beatification. But three decades after his assassination, Pope Benedict XVI cleared the archbishop’s sainthood cause.

In February Pope Francis signed the decree recognizing Archbishop Romero as a martyr, a person killed “in hatred of the faith,” which meant there is no need to prove a miracle for beatification. In general two miracles are needed for sainthood — one for beatification and the second for canonization.

Father Turcios said by studying Blessed Romero’s life, others will discover all the Gospel truths that led him to defend life, the poor and the church, and do away with untruths surrounding his legacy.

During the country’s civil war that lasted from 1979 until 1992, some Salvadorans hid, buried and sometimes burned photos they had taken with or of Archbishop Romero, because it could mean others would call them communists or rebel sympathizers and put their lives in danger.

One of the offertory gifts during the Mass May 23 was the book “De la locura a la esperanza” or “From Madness to Hope,” a document generated during the peace accords that ended the country’s 12-year war.

It chronicles some of the greatest human rights atrocities committed in El Salvador during the conflict, including the killing and rape of four women religious from the U.S., the killing of priests, catechists, as well as massacres of unarmed civilians — more than 70,000 died in all.

Priests, bishops and cardinals wore some form of a red vestment, signifying martyrdom. Their stoles were emblazoned with Archbishop Romero’s episcopal motto: “Sentir con la iglesia,” or “feel with the church,” also translated as “to think with the church.”

The ceremony culminated a week in San Salvador that saw pilgrims, mainly from Latin America, but also from as far away as Singapore and many from the United States, who wanted to celebrate the occasion. Flowers, music, tears and happiness flowed at San Salvador’s Metropolitan Cathedral of the Holy Savior, where the archbishop is buried. He is officially Blessed Romero, but to others he already is and has been “San Romero,” or St. Romero of the Americas.

Father Juan J. Navarro, of Maracaibo, Venezuela, said he visited the archbishop’s burial place to voice the many needs of his country. Food and freedom of expression are lacking, he said, and it’s a place with a similar situation to the one that led to war in Archbishop Romero’s time.

“I asked for [Archbishop Romero] to intercede for our rights, to continue to inspire in us the will to go forward when the reality of life is serious,” he said.

For 81-year-old Salvadoran Gregoria Martinez de Jimenez, the beatification marked the official recognition of something she has known all along: “We finally have a saint who is one of ours,” she said as tears flowed.

“He was a duplicate of Jesus,” added her daughter Maria Elena Jimenez Martinez, 44. Both women attended Archbishop Romero’s funeral, where smoke bombs went off and shots were fired. More than elation, they showed happiness mixed with sorrow that remains from a painful time.

Jesuit Father Miguel Angel Vasquez Hernandez, of Arcatao, said the archbishop would probably have felt a little taken aback with such a ceremony, which is expected to cost about $1 million and was attended by hundreds of thousands.

The best way to honor him, he said, is to work for peace and justice in El Salvador, and in other parts of the world afflicted by poverty, war, violence, oppression and economic injustice.