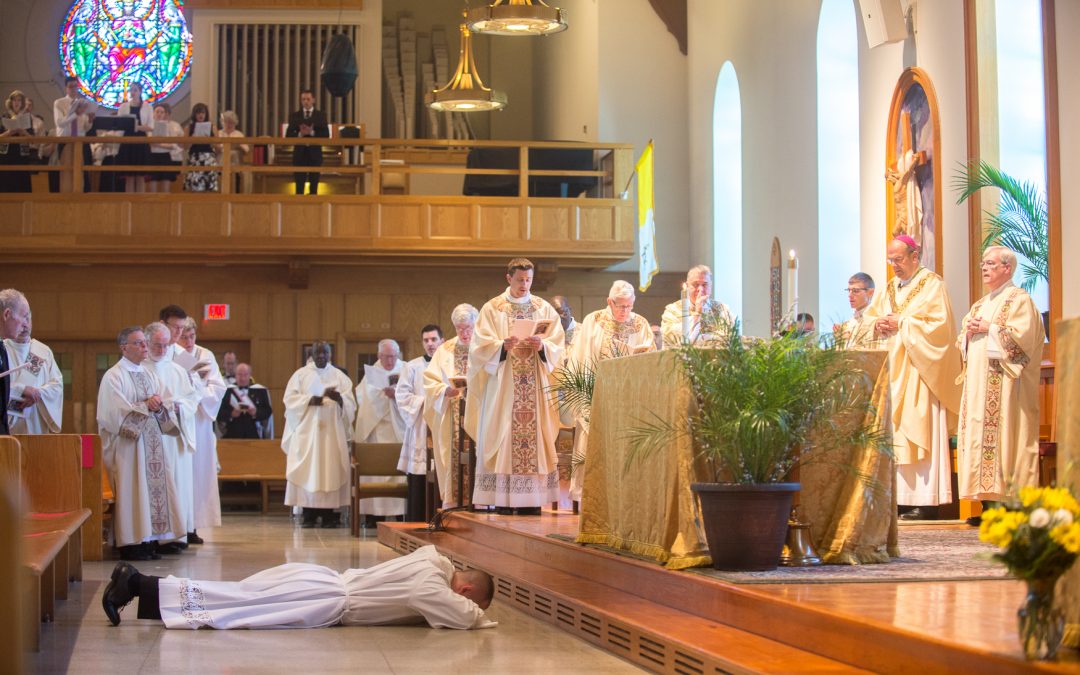 SYRACUSE — As he lay prostrate in the sanctuary of St. James Church, diocesan seminarian and soon-to-be-deacon Matthew Rawson felt a calmness come over him.

Listening as music filled the church and the congregation sang the Litany of Supplication, his heartbeat slowed and he relaxed into the experience. “It was absolutely beautiful,” Rawson said.

Rawson was ordained to the transitional diaconate May 20 during a liturgy celebrated in his home parish by Bishop Robert J. Cunningham. Surrounded by family, friends, clergy, seminarians, and parishioners, Rawson was promoted to the Order of Deacon and took another step toward his anticipated ordination to the priesthood next spring.

Deacon Matthew Lyons, who will be ordained a priest of the diocese June 3, proclaimed the Gospel reading and then called Rawson forward from his seat with his family in the front pew. Father Thomas Servatius, diocesan director of seminarian formation, presented Rawson to Bishop Cunningham as a worthy candidate. Bishop Cunningham then elected Rawson for ordination to the diaconate, affirmed by the congregation’s joyful applause.

“The readings today focus on call and service,” Bishop Cunningham said in his homily. In the first reading, Num 3:5-9, the tribe of Levi is called to perform holy service as God’s trusted servants. In the second reading, Acts 8:26-40, Philip is called by the Spirit to tell a court official of the Good News of Jesus.

“Matthew, listen to this passage from the Acts of the Apostles carefully, not only today, but often,” Bishop Cunningham said. “Philip, the deacon, is a listener, open to hearing the voice of the Spirit. He responds eagerly. He is ready and prepared to break open the scriptures in order to bring people the Good News. He leads those entrusted to his care from the sacred words of scripture to a sacramental encounter. This is a very good road map for your life journey.”

The Gospel reading, Luke 10:1-9, recounts Jesus sending the disciples out on mission. Rather than offering a pep talk, Jesus tells them “the harvest is rich but the laborers are few.” “Today’s Gospel brings into bold relief the cost of discipleship. A disciple follows the master and imitates him. A disciple is a servant who is willing to lay down his life for his sheep as Jesus laid down his life for us,” the bishop said.

As a servant of the Word, Rawson is to share with all he meets “the message of hope and salvation which has been handed down to us in sacred scripture and the tradition of the Church. You must fulfill this sacred function not only by preaching the Word, but even more by the witness of a life of faith which seeks to manifest Gospel values,” he continued.

As a minister of the liturgy, Rawson will assist the bishop and priests in the service of the altar. “As you lead God’s people in prayer, may your service strengthen that union which has God’s spirit as its origin and peace as its binding force,” Bishop Cunningham said.

“Finally, as a minister of charity, be a servant of love and see in those who come to you — especially the poor and the needy — the very person of Christ,” he said.

Before the bishop, Rawson declared his intention to serve in the office of deacon and promised his obedience and respect to the bishop and his successors. Rawson then prostrated himself as the assembly sang the Litany of Supplication. Then, as Rawson knelt before him, Bishop Cunningham placed his hands on Rawsons’ head and offered the Prayer of Ordination.

Father Thomas Fitzpatrick, longtime pastor of Our Lady of Lourdes, and Father Christopher Ballard, current pastor of St. James, vested Rawson in a stole and dalmatic, the vestments of a deacon. Bishop Cunningham presented Rawson with the Book of the Gospels and then offered him the fraternal kiss of peace. Deacons present followed suit, welcoming Rawson into the Order of Deacon.

Following the celebration, Deacon Rawson greeted well-wishers with a huge smile. “I can’t even begin to express how I feel right now,” he said.

Not only were the moments spent in supplication meaningful, so too were the welcomes from his fellow deacons. “That was, honestly, just truly amazing,” he said.

Deacon Rawson was able practice this new aspect of his ministry almost immediately, preaching at the 11:15 a.m. Mass May 21 at St. James. That same Mass saw him perform another new ministry as a deacon: baptism. His homily, completed before his ordination, tied together the first reading and the Sacrament of Baptism with the theme of handing on the faith. Though he was nervous before Mass began, preaching and the baptism went smoothly, and “everything seemed to just fall into place,” Rawson told the Sun the following day.

Deacon Rawson will spend his summer in service at St. Joseph’s Church in Endicott, where he served during his pastoral year. He will return to St. Mary’s Seminary and University in Baltimore in the fall to complete his final year of formation before his priestly ordination next June.

All photos for the Sun, courtesy Richard Mossotti of Syracuse Catholic Television.

“We pray that the passage of the Child Victims Act brings some measure of healing to all survivors by offering them a path of recourse and reconciliation,” the bishops said. “The legislation now recognizes that child sexual abuse is an evil not just limited to one institution, but a tragic societal ill that must be addressed in every place where it exists.”
“Words are insufficient to describe the profound sadness we feel at the contemplated passage of New York State’s new proposed abortion policy.”
Father Richard Dellos, a priest of the diocese for more than 50 years and pastor of St. Joseph-St. Patrick Church in Utica since 2002, died Aug. 11 from COVID-19-related complications, according to diocesan officials. He was 77.