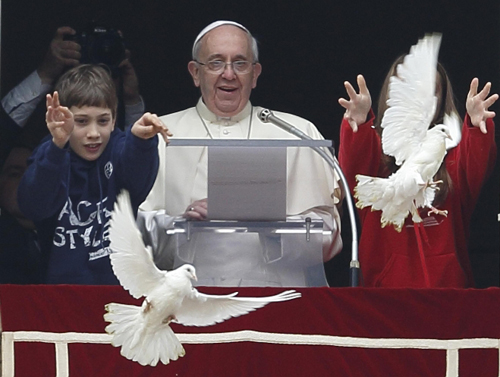 Here’s a look at some of the stories making headlines today:
• The papal message for World Peace Day will focus on overcoming indifference. The peace day theme and a papal message about it — expected to be released in mid-December — aim to help people reflect on how they can “build together a more conscious and merciful and, therefore, more free and fair world,” the Pontifical Council for Justice and Peace said.
•The Catholic Legal Immigration Network and the Sisters of Mercy of the Americas decried the Obama administration’s effort to have a judge set aside her orders for the release of families being held in immigration detention centers. Judge Dolly Gee of the Central California District Court in a July 24 ruling said the federal immigrant family detention system violates a court settlement over the treatment of juveniles held by the immigration agency. Gee ordered the administration to release the children and their mothers who are being held in three detention centers in Texas and Pennsylvania unless they constitute a threat to others or a flight risk that cannot be mitigated by other means, such as ankle bracelet monitoring. In a 50-page reply filed Aug. 6, the Justice Department asked Gee to reconsider her orders and allow Immigration and Customs Enforcement to continue to hold families for short periods while it is determined whether they have legitimate claims for asylum or can be deported. The administration argued that the detention centers serve a valid purpose in deterring other people from attempting to cross the border from Mexico without permission, though Gee had concluded there was no evidence to support that.

• The Assembly of the Catholic Ordinaries of the Holy Land filed an official complaint to Israeli police against the leader of a radical Israeli movement over his remarks supporting and encouraging the burning of churches. Father Pietro Felet, the assembly’s secretary-general, filed the complaint Aug. 7 against Israeli Rabbi Bentzi Gopstein and the Lehava movement on behalf of more than 20 patriarchs and bishops. Rabbi Gopstein, who heads the Jewish anti-assimilation extremist movement Lehava, said in early August that “churches and mosques could be burned,” asserting that “Jewish law advocated destroying the land of idolatry.”

• File under “pretty cool”: During his Sept. 26 speech at Independence Hall, Pope Francis will use the same lectern from which President Abraham Lincoln delivered his Gettysburg Address.