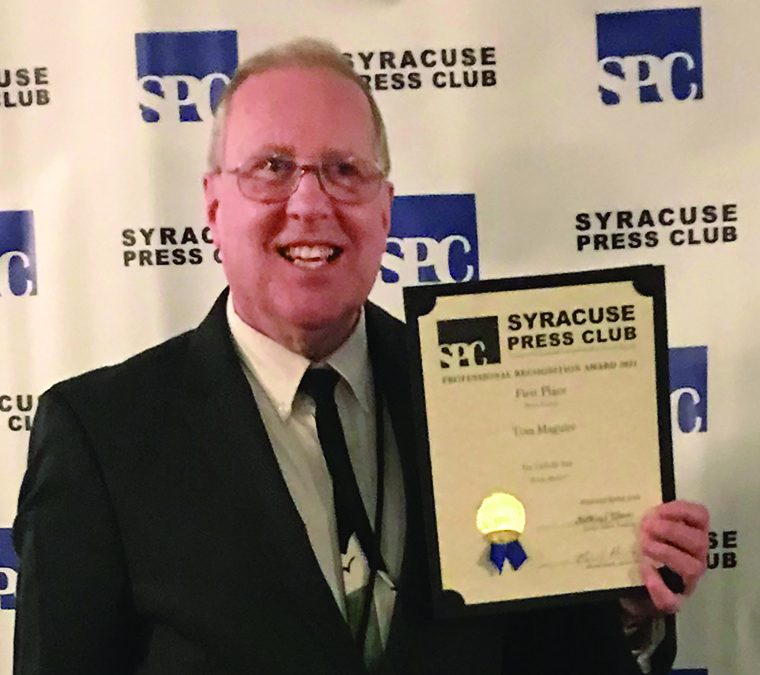 SPC members are journalists, educators, students and communications professionals working in Central and Northern New York print, radio, television and digital media. They gathered for the awards dinner May 7 at the Collegian Hotel & Suites in Syracuse.

In the category of Print Special Interest, News Feature or Series, Maguire won for his series on the new Brady Market at 307 Gifford St. on the Near Westside of  Syracuse. The market, which operates in connection with the Brady Faith Center, employs community residents who need a first, second or third chance in life, and every dollar spent there increases programming in the community.

“The Brady Market is celebrating its one-year anniversary at the end of May,” Kevin Frank, director of the Brady Faith Center, said this week in an email. “Our unique mission of Hope, Health and Healing continues to grow as it is being embraced as a neighborhood market and center for support and healing.

“Together, we are building a comprehensive investment model centered on serving the multiple needs of the people in our community.”

Maguire’s series quoted Father James Mathews, pastor of St. Lucy Church in Syracuse: “What a blessing the Brady Market has been for the good people living in the Near Westside — excellent hot meals, reasonably priced and ready to go, a full line of grocery items plus a catering service open to all.”

“This year marked one of our most competitive contests in recent memory,” the SPC said in its newspaper announcing the awards. “We received more than 400 entries across 57 categories.

“Our judges from partner press clubs in California, Florida, Idaho, Louisiana, Pennsylvania, Ohio and Wisconsin had the daunting task of reviewing and ranking the top entries” in the categories of TV, print, online, multi-media and college journalism.

Taking second place in the category of Print Special Interest, News Feature or Series was SPC Secretary Kenneth Sturtz, for his In Good Health story “How a Young Buffalo Woman Learned to Embrace Hearing Loss.” Sturtz also won four other awards on the night, including two first-place awards.