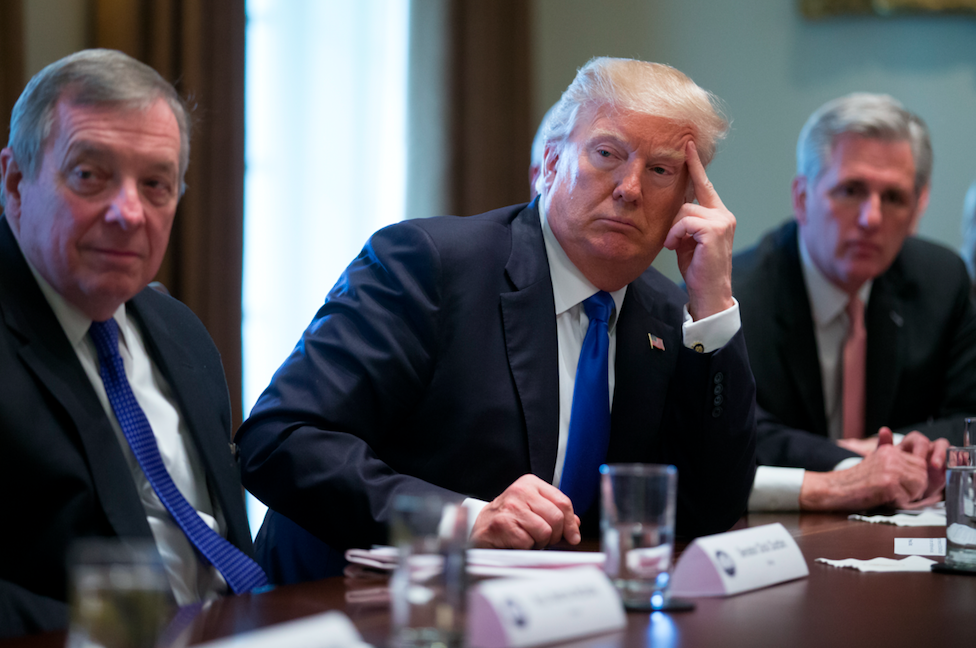 WASHINGTON (CNS) — Some Catholics said it was more important to look at the sentiment, not the vulgarity of the words the president of the United States allegedly used to refer to immigrants from certain countries: Disparaging, hateful, racist.

Those are the words some Catholic organizations used to describe how they feel about profane comments attributed to U.S. President Donald Trump at a Jan. 11 meeting about immigration.

On Jan. 12, Sen. Richard J. Durbin, D-Illinois, said the president used profanity to refer to people from certain countries, and other “things which were hate-filled, vile and racist” during a meeting about immigration, and at least one Republican senator, South Carolina’s Lindsey Graham, confronted him about it.

In a statement following the reports, the National Black Catholic Congress said it condemned the remarks.

“As people of faith, concerned with the dignity of all of God’s people, we deplore such racist and hateful speech,” the group said.

While speaking to the press, Durbin said the comments, made while trying to hash out a deal on immigration, came after he was listing the countries with the highest numbers of people who benefit from Temporary Protected Status and include Haiti, El Salvador and some African nations, countries that, one by one, have seen the protection evaporate since Trump took office. Trump questioned why the U.S. would accept more immigrants from Haiti and “[expletive] countries.”

“Those countries the president disparaged are by no means Shangri-La’s [sic] but, that’s why people emigrate from them,” said Miami Archbishop Thomas G. Wenski Jan. 12 via Twitter. “And as Emma Lazarus’ poem on the Statue of Liberty suggests, they become the ‘best and the brightest’ of the immigrants to this country.”

The Archdiocese of Miami, which he leads, is the spiritual home to one of the largest populations of Haitian Catholics in the country.

Archbishop Wenski also said via Twitter that while the president had on Jan. 9 suggested he would sign whatever Congress brought him on immigration reform, his remarks instead “laid bare the true motivations of those that want to close our nation to immigrants.”

“As our brothers and sisters from these countries are primarily people of color, these alleged remarks are especially disturbing,” the statement said.

And it was “especially appalling” that the president “graphically enunciated the contempt he feels for people in struggling nations” during a week when the Catholic Church in the U.S. was marking National Migration Week, Atkinson said. The U.S. Catholic bishops instituted National Migration Week — observed this year Jan. 7-14 — to reflect on the circumstances confronting migrants, immigrants, refugees, and human trafficking victims.

“We call on the president to apologize to the people of all the nations he slandered and to the American people,” Atkinson said. “We ask members of Congress and other leaders to denounce these slurs. They do not reflect who we are as Americans.”

The Sisters of Mercy of the Americas in a statement said they found it appalling that Trump would use “vulgar and offensive” language to describe the countries, which include places where the women religious serve.

“We find the sentiment behind the comments even more troubling and agree with the spokesperson for the United Nations Human Rights Commission who in his condemnation noted that the language is consistent with the racist decision making and attitude that has been expressed by this administration over the past year,” the Mercy Sisters said referring to comments from Rupert Colville, U.N. human rights spokesman.

“These are shocking and shameful comments from the president of the United States. There is no other word one can use but ‘racist,'” Colville said to press in Geneva, adding that vulgarity wasn’t the main offense in what the president said.

“It’s about opening the door to humanity’s worst side, about validating and encouraging racism and xenophobia that will potentially disrupt and destroy lives of many people,” he said.

The Sisters of Mercy said they would continue to “welcome immigrants and refugees from these countries in our schools, churches, health care institutions and other ministries.”

In his statement, the USCCB’s Rogers said: “All human beings are made in the image and likeness of God, and comments that denigrate nations and peoples violate that fundamental truth and cause real pain to our neighbors.

“It is regrettable that this comes on the eve of Martin Luther King Jr. Day and could distract from the urgent bipartisan effort to help Dreamers and those with Temporary Protected Status,” he said. “As a vigorous debate continues over the future of immigration, we must always be sure to avoid language that can dehumanize our brothers and sisters.”