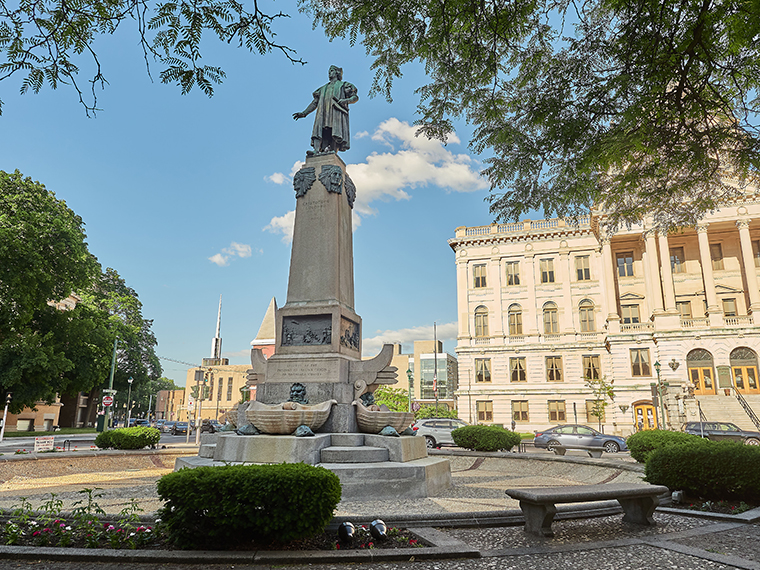 By 1897, about 5,000 Italian immigrants lived in Syracuse. Immigrants from southern Italy suffered civil unrest and poverty following the 19th century risorgimento, which ended in 1870 with Italian unification.

“They fled to America looking for a better life and greater freedom,” said David Gibson, director of Fordham University’s Center on Religion and Culture and an expert on Catholicism. “When they got here, they found prejudice from the dominant Protestant society and ethos.”

In 1932, Syracuse’s Italian American community broke ground near St. Mary’s Church (later the Cathedral of the Immaculate Conception) for a monument honoring Christopher Columbus (1451-1506), the Italian explorer sailing on behalf of Spain. Two years later, 40,000 people filled downtown streets for a parade and statue dedication. The statue honoring their compatriot, who charted the transatlantic route in 1492, cemented their sense of belonging in a country that had not always welcomed them.

Recent years, though, have seen increasing calls to remove the statue. Critics cite Columbus’ brutality and enslavement of indigenous peoples, and the legacy of colonialism that brought disease and sought to extinguish indigenous cultures.

Three days before Columbus Day, Syracuse Mayor Ben Walsh announced plans to remove the statue of Christopher Columbus in downtown Syracuse and rename Columbus Circle. The city will create an educational site that will recognize the history and contributions of the Onondaga Nation and “highlight the contributions of others who have and are experiencing oppression, including Black and Brown Americans, Italians, and other immigrants to America and, more recently, New Americans,” the city said.

The fountain and obelisk monument at the circle’s center will remain as a memorial to the Italian American community.

A place of healing

“This space should be both a tribute to Italian Americans and a place of healing at which we celebrate our shared accomplishments,” Walsh said in an Oct. 9 statement. “This decision is based on the fact that we can honor our Italian American community without focusing on a statue that has become the source of division over decades and overshadowed the original intent of the monument.”

The 11-foot, 3,000-pound bronze likeness of Columbus will be moved to an undetermined private site. The heads of Indigenous peoples of the Plains, which are positioned beneath Columbus’ feet at the bottom of the statue, and bas relief plaques that read “Columbus bringing Christianity to the New World” and “Columbus returning to Queen Isabella’s Court” will be removed from the obelisk.

Walsh will appoint a commission to recommend design changes and find a location to move and preserve the statue.

Some Italian Americans at the Oct. 12 wreath-laying ceremony at the monument criticized Walsh’s decision.

“It’s destroying part of our history,” said Nick Pirro, former Onondaga County executive and vice president of the Columbus Monument Corp. His grandparents immigrated from Italy around the turn of the 18th century.

“We think it was a tribute to people who came here to make a good life and a great city,” Pirro said. “We feel that to take the history of Italian Americans out of downtown and that circle is a slap in the face to the community and history.”

Pirro and other opponents are seeking legal options to challenge Walsh’s decision, said Pirro, who still lives on Syracuse’s North Side, where he was born. “We question the ability of the mayor to do this unilaterally,” he said.

“I hope we don’t go down a legal path,” Walsh said at the Oct. 9 press conference.

“Take it down. Take it down,” chanted participants at a June 29 rally.

Pirro, who served on two city commissions about Columbus,  attended a July 17 rally supporting the statue’s location. Signs reading “Mayor Walsh Don’t Touch the Columbus Monument” appeared on lawns and cars since then.

“The status quo in Columbus Circle is unacceptable,” he said in late June as protests here and worldwide demanded redress for historic racial injustice.

InterFaith Works facilitated the process and issued a report that summarized committee discussions and outlined recommendations.

The Onondaga Nation, on whose ancestral lands Syracuse sits, called for a process and decision that demonstrated unity.

“We fully understand the wishes of the Italian American community to honor their heritage, but it is burdensome for the people of Onondaga to see Christopher Columbus memorialized with a statue,” Onondaga Nation Chief Sidney Hill said in an Aug. 12 statement. “Within our lands and hearts, finding equality and peace is difficult knowing the hardships our ancestors endured as a consequence of his campaign.”

Syracuse University professor Torquato DeFelice, a sculptor and painter, is credited with envisioning a Columbus monument in 1910. In 1928, the Columbus Monument Association (which continues to sponsor the annual commemoration) had raised $18,000 (about $273,500 today, adjusted by inflation) for the project.

“Look at what those people did to raise that money,” said Pirro, whose father contributed to the fund. “You’re talking a few years after the Depression. They did it with great pride. The people didn’t have a lot of money. They gave a quarter or 50 cents or a dollar. There were people who took out a bank loan to give $25.”

After debate, St. Mary’s Circle was chosen. St. Mary’s, established in 1845, was designated the Cathedral of the Immaculate Conception in 1904 by Bishop Patrick Ludden (1886-1912), a native of Ireland’s County Mayo who became the first bishop of the Syracuse Diocese, established in 1886.

Mussolini signed the 1929 Lateran Treaty on Italy’s behalf and “was very keen on cultivating the Italian diaspora abroad,” Gibson said.

The treaty resolved the so-called Roman Question, which formalized the Vatican’s recognition of the state of Italy, with Rome as its capital. Italy recognized papal independence and sovereignty over Vatican City.

In Syracuse, Italian immigrants trailed behind populations of Irish immigrants (6,625) and German immigrants (8,900), according to a 1897 Syracuse Sunday Herald report. Syracuse’s population was 108,370 in 1900, an increase of about 20,000 a decade earlier, according to the U.S. Census. The Syracuse Diocese numbered about 100,000 at the time, according to Faith and Friendship, the 1987 diocesan history by David O’Brien.

Italian immigrants “found profound prejudice in their own church,” Gibson said. “The Irish refused to allow the Italians to worship in their church. They were newcomers, they had darker skin. The Italians experienced all the prejudices waves of immigrants experienced trying to distinguish themselves from other immigrants.”

Immigration led to “an amazing proliferation” of ethnic parishes, Gibson said. “You have these pockets. It was a gorgeous mosaic. But it was truly a mosaic. Each individual community had its own church. Now it’s more of a melting pot.”

Protests have targeted the monument since the late 1980s. As then Syracuse Mayor Tom Young unveiled a restored monument in October 1992, a protest took place nearby. A year earlier, a dummy representing Columbus was burned in effigy and a man splashed red paint on the monument.

One point of tension in committee discussions was Columbus’ intent vs. Columbus’ impact, the CCAC report says. “We frequently struggled with finding common understanding of the contentious components of history,” the report says. “What were his motivations — selfish or altruistic? Did he want fame and fortune or was he religiously inspired (saving souls and finding riches to fund the retaking of Jerusalem?) Should his religious motivations be acclaimed or repudiated? What was Columbus’ direct role in the atrocities?”

A pamphlet available on the City of Syracuse Parks Department website notes controversy about the statue’s intention. “Neither in the original design of the monument, nor in its restoration, was any disrespect intended toward the thousands of Native Americans who died or were displaced by the wave of colonialism that Columbus’ voyage began five centuries ago,” the pamphlet says. “We now know that, though the first Europeans who came here thought of themselves as heroes of an enlightened culture in an untamed wilderness, they also plundered an orderly and advanced [society.]”

Some recent protests over racial inequality have highlighted that tension. At least 35 Columbus statues have been toppled since protests over George Floyd’s killing started in May.

The Federation of Italian-American Societies of Western New York in July asked Buffalo officials to remove a statue of Christopher Columbus from the city’s Columbus Park and restore ownership to the Federation; the statue will be stored “until future display at [a] location determined by the Federation,” according to a press release from the group. The Federation also requested the mayor rename the park “in dedication to Italian-American heritage” and replace the Columbus statue with one honoring Italian immigrants. A rendering of that statue —  LaTerra Promessa, or The Promised Land — was unveiled Oct. 12.

Twice in recent weeks, Utica’s Columbus statue was vandalized. Dueling petitions have asserted perspectives on the statue, which has stood at Memorial Parkway since 1966. A 17-year old has been arrested in connection with the vandalism.

Walsh acknowledged moving the Syracuse statue will not end debate, and he knows that some Italian Americans are disappointed and angry with his decision. “My goal throughout this process has been to help our community heal and minimize and mitigate the pain,” he said.