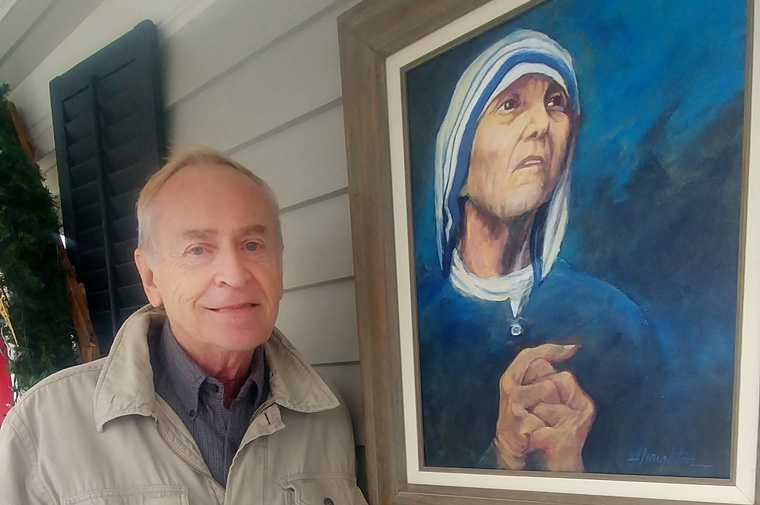 New Berlin man says he is guided by Holy Spirit

NEW BERLIN — The student had a free pass to challenge the teacher.

Carl M. Houghton taught art for 31 years at New Berlin Central School. One day, a student asked him about an unfinished painting that was sitting in a closet in school. “‘Mr. Houghton, when are you going to finish that painting?’” the boy said. Houghton responded:

“‘You know, that’s a good idea, I don’t know. I would like to finish it.’ He says, ‘Well, you always tell us: Don’t leave a painting unfinished.’ So that got me thinking about it.”

The student was persuasive; Houghton has completed a large number of religious and other paintings. Now 75, he relishes life “in the middle of nowhere” in Chenango County. “A lot of artists hide out in them there hills,” he said. He sells his artwork, but the prolific artist still has many paintings on display in his 100-year-old home. He even displays one outside: Mother Teresa with her hands locked in prayer. “Isn’t that something?” neighbor Marian Wellner said. Neighbor Harry Avery agreed: “That’s a good one.”

The one Houghton calls his first significant painting, “The Crucifixion,” serves as the 10th Station of the Cross at New Berlin’s St. Theresa of the Infant Jesus Church, which he called “a very warm, caring place.” Carl’s wife, Patricia, is the parish manager, organist, director of music and liturgy, and choir director; Carl teaches religious-education classes there.

“The Crucifixion” is four feet by five feet. “I did this huge painting [in 1977] and I was going to give it to the Diocese of Syracuse,” Houghton said. “But the priest at that time, Father [Joseph R.] Wright, said, ‘That’s not going anywhere; that’s staying with us,’” Houghton said.

He added: “It took me quite a long time to do it; I spent a lot of hours. … My longest session was about 12 hours, in which I was just lost into this subject. … I’ve had many spiritual things happen in my life, and this was led through the Spirit to be able to accomplish it. It’s a labor of love.”

“The Crucifixion” coincided with Houghton’s conversion to Catholicism at the age of 33. “And I always think that No. 33 is a magic number, because that was Christ’s year that he died,” he said.

Houghton accepts commission assignments and he works in various genres. He also paints pastoral and water scenes. His watercolors range from $75 to $120; his other paintings, from $300 to $1,200. A recent customer bought $3,000 worth of paintings. “She has a big home,” he explained.

Buyers, he said, “want to connect with the artist. … They like to meet me [in his attic studio], and talk with me. And then when they feel a connection with me, if they like my paintings, then they buy.” He said his paintings can be found by googling his name or by visiting yessy.com.

Houghton received his bachelor of fine arts degree from Syracuse University and his master’s in art education from SUNY New Paltz.

At SU, he worked with George Vander Sluis and Ainslie E. “Pat” Burke, well-known painters out of New York City: “people I admired.”    Vander Sluis wanted to see if he could solve the problem of Houghton’s colorblindness. He can see some color but not much, so he started out painting colorless pieces. He compensates by working with “extremely good light”; he has skylights and windows in his attic studio.

He still teaches adult students in a classroom in Norwich, about 12 miles away. His approach includes doing everything prayerfully; capturing the sacred moment (such as the Holy Spirit’s hand touching a surprised prophet in one painting); knowing your reason for painting; seeking to move people; knowing when to be light and thin with the stroke; encouraging all students; and keeping the mood in the room light. He tells his students not to worry about mistakes.

“I always tell them,” he said, “‘I want you listening, focused because I never know when I’m going to say something important.’”

One year, Houghton was confined to his house for the entire winter after he had back surgery. “And I decided I wanted to become a better painter,” he said. “And I thought, well, I always teach other people. Everywhere I go, they want me to teach. When do I learn? So I decided: I’m going to just learn from all the artists that have inspired me.”

He has studied dozens of artists including Chagall, Turner, Van Gogh, Rubens, Rockwell, and Cezanne. His “Artist Statement” notes that he works from still-life setups, photographs, magazine subjects, and pure fantasy.

Also, pure inspiration. “I think I’m inspired by the Holy Spirit to do a lot of this,” he said. “When I stop and think and I look back at some of the things I’ve done, I think: I didn’t do all those. Someone must have helped me.”

When he finished the neglected painting of Mother Teresa, “she was with me. It was just like she was right there. And she was laughing and joking. It’s just: ‘Oh, my nose isn’t that big. What are all these wrinkles on my face; I don’t have that many wrinkles.’ Just joyful conversation while I was painting. And it wasn’t like I looked at her and I was scared because I’m seeing something that was dead; it was just her whole spirit that enveloped me.”

If his students are struggling with their own inspiration and their painting needs a lot of help, “I just say: Do you mind me working on your painting? And they’ll say no. And so I have them get up. … ‘You stand behind me. And you watch me work.’ … They love to see me work, because they think I can do anything.”

Their assessment fits. “You know, when you do things,” Houghton said, “you don’t really think about how you do it. By the time you’re 75 years old, it’s sort of natural. I mean, you’ve done this your whole entire life. So, when I approach painting and drawing, I just make sure that when I tell them something, I tell them the very basic thing, because I have no idea of where they are. So I start with simple.”

“He’s helpful,” neighbor Wellner said. Her son Robert took art classes from Houghton at New Berlin Central School, which is now known as Unadilla Valley Central School. “I like them a lot,” she said of Houghton’s paintings, “but I buy them for my children because they like him so much.”

Neighbor Avery recalled the time that his wife, Barb, wanted one of Houghton’s paintings, so he traded a big pile of wood for it.

Another fan is Houghton’s wife. “I compliment him all the time,” Patricia said.

“She sings beautifully,” he said of Patricia’s church music. Hearing her sing Bach’s or Schubert’s version of the Ave Maria is very moving, Carl said.

The Houghtons’ daughter Elizabeth Olsen, of Earlville, said in an email that Carl’s paintings “have given us a lifetime of enjoyment.”

In his upcoming March classes in Norwich, Carl hopes that he can motivate adult students to produce two paintings in four weeks, with only one class per week.

They learn fast in them there hills.