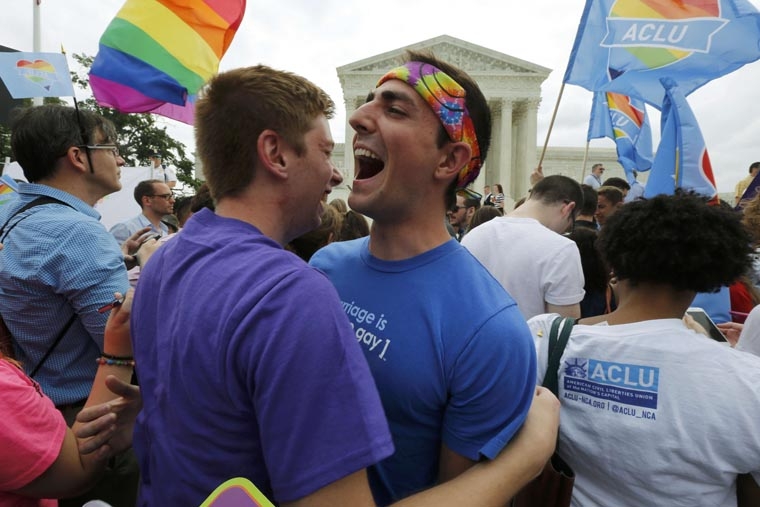 “The nature of marriage is that, through its enduring bond, two persons together can find other freedoms, such as expression, intimacy, and spirituality,” wrote Justice Anthony Kennedy for the 5-4 majority. “This is true for all persons, whatever their sexual orientation.”

In a second part of the ruling, the court affirmed that every state must recognize marriages performed in other states, a question that will become moot as the first part of the opinion is enacted. As of June 26, 36 states, the District of Columbia and Guam allowed same-sex marriage. Some of those states passed laws allowing it, while others have done so under court ruling.

Recognizing in several places the role of religious beliefs in the questions surrounding same-sex marriage, Kennedy said toward the conclusion of his 28-page opinion that “it must be emphasized that religions, and those who adhere to religious doctrines, may continue to advocate with utmost, sincere conviction that, by divine precepts, same-sex marriage should not be condoned.”

The First Amendment ensures protection for religious organizations and individuals as they seek to teach the principles “that are so fulfilling and so central to their lives and faiths,” he continued, and to “their own deep aspirations to continue the family structure they have long revered. The same is true of those who oppose same-sex marriage for other reasons.

“In turn, those who believe allowing same-sex marriage is proper or indeed essential, whether as a matter of religious conviction or secular belief, may engage those who disagree with their view in an open and searching debate. The Constitution, however, does not permit the state to bar same-sex couples from marriage on the same terms as accorded to couples of the opposite sex.”