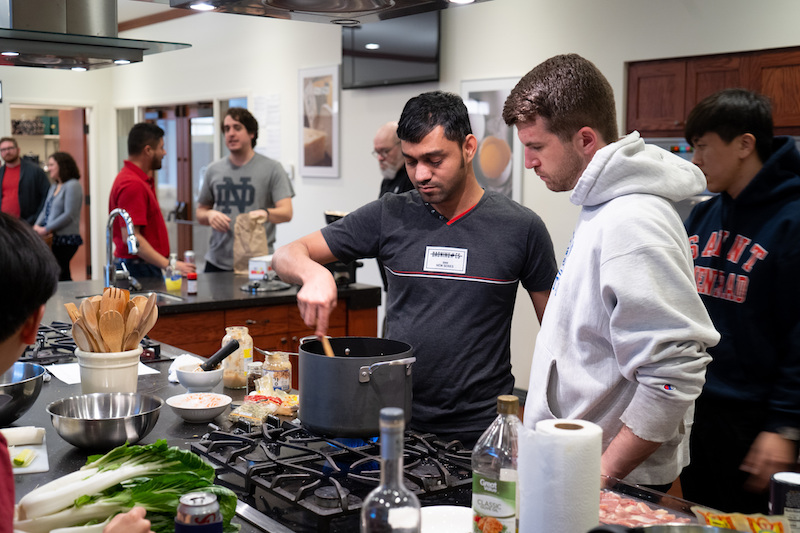 Michael Prakasam, center, a seminarian from the Diocese of Palayamkottai, India, stirs a pot of curry during a cooking class for seminarians, held at St. Meinrad Seminary and School of Theology in St. Meinrad, Ind., Jan. 18, 2019. Seminarian Danny Taylor from Diocese of Lexington, Ky., looks on. The class aims to equip future priests for healthy, wholesome living. (CNS photo | Katie Rutter)

ST. MEINRAD, Ind. (CNS) — Familiar sounds of sizzling meat and clanging cutlery associated with food preparation offered a different kind of doctrine than one might expect in a third-floor classroom at St. Meinrad Seminary and School of Theology.

Their instructor, Benedictine Father Julian Peters, watched the whole operation and occasionally stepped in to add an ingredient or test a consistency.

While most of the classes at this southern Indiana seminary focus on spiritual and intellectual formation, a one-day cooking class on Jan. 18 aimed to help these future-priests function as whole — and wholesome — human beings.

“It’s a matter of stewardship, of being able to take care of ourselves,” said Father Peters, “so that we can be healthy and happy and take care of others.”

During the two weeks between school semesters, known as the “January interterm,” instructors tackle a variety of topics not covered in the regular curriculum.

“Not only in a person’s own personal development and self-understanding, but also in the human skills that that person will need in service of the church and of the people that he will be ministering to,” he told Catholic News Service.

St. Meinrad Seminary installed a large kitchen in one of the rooms for precisely this purpose. Eight burners, four ovens, two sinks and plenty of countertop space give the seminarians an opportunity to learn a skill that may have been overlooked.

A priest is frequently the sole occupant of a rectory, so he must be able to take care of himself, often while juggling many other obligations.

“They’ve got Mass and then they’ve got to go visit the hospital and then there’s a sick call at a nursing home but then they’ve got pastoral counsel, finance — they have all this stuff to do and it’s very easy for them to put themselves last on the list,” said seminarian Michael Bialorucki, who spent the summer serving at a parish in his home diocese of Toledo, Ohio.

“I’ve seen a lot of priests just get themselves McDonald’s or Wendy’s. It will eventually hurt their health,” said Taesang Yun, a seminarian from Busan, South Korea.

The men in the cooking class are on track to be ordained as priests in 2020.

Father Peters said his goal, in the brief period of time set for the cooking class, is to give them tips on how to improvise in the kitchen, what ingredients to keep stocked and how to use tools, like a slow-cooker, to reduce the hands-on preparation time.

As the men together created a chicken soup, complete with dumplings, vegetables and a leftover rotisserie chicken, Father Peters also praised the “therapeutic value” of cooking in a priest’s life.

“In our ministry, we don’t see how things turn out,” he said. “We baptize a baby but you don’t know how their life always pans out. You receive the vows of a couple at marriage but then they transfer out of the parish or we get transferred.”

When cooking, however, Father Peters said that, “you can see something through to completion, and there’s that human sense of satisfaction that comes with that.”

According to Father Colgan, the seminary has placed renewed emphasis on human formation in the wake of revelations related to the clergy sexual abuse crisis. Men must be prepared — spiritually, intellectually, mentally, and physically — for the unique demands of the priesthood.

Read more: Forming shepherds for tomorrow: How diocesan seminarians are selected, formed for the priesthood

In addition to the classes offered during the interterm, the school hosts 30 conferences throughout the year about other tangible topics.

Father Colgan said that the seminary staff also tries to discern and fill the individual needs of each student.

While none claimed that a cooking class alone would resolve the clergy abuse crisis, both students and staff implied that a priest’s knowledge of self-care was an important ingredient in the mix.

“The fact that we were called at this time of crisis, and that we are a formation at this time,” said Daniel Velasco, a seminarian from the Diocese of Little Rock, Arkansas, “it’s an invitation to be part of the solution.”

“We’ve taken (the crisis) as a challenge to say that we can be better, we can be healthier,” Bialorucki said.

Editor’s note: Meet the seminarians of the Diocese of Syracuse on the website of the Office of Vocation Promotion.