Dancing the night away at the Good News Center 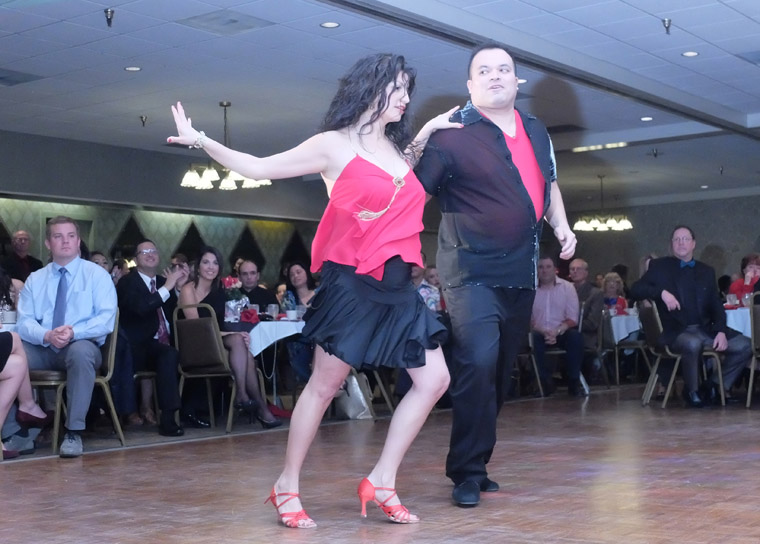 UTICA — Toes were tapping Feb. 13 at the Good News Center’s signature event “Dance the Night Away.” The popular local happening is reminiscent of the ABC television show, “Dancing with the Stars.” The unique fundraising event brought local “celebrities” together for a Mohawk Valley version of the famous dance competition. Dancers were high profile community members such as bank executives and TV newscasters. The event drew more than 400 people, a sellout crowd just as it has done every year.

Part of the Good News Center’s mission is to serve as a resource that strengthens marriages and families through relationship education programs and retreats. Executive Director and CEO Michael Buckley said the event “has been a very successful way for the Good News Center’s mission of evangelization to be shared with the public over the years. Each year we have had about ten celebrity dancers from the community participate in the events, at Hart’s Hill Inn. That’s over 100 people who have brought their friends and families to the dance to hear about the marriage and family programs that Good News offers. That’s 300 to 400 new people hearing our story every year.”

Programs offered by the Good News Center, said Buckley, are vital for the community. “In these times of high divorce rates and economic struggle, it is all the more important to offer resources to families in our community … From a firsthand viewpoint, we see the positive effect of ongoing peer support groups and programs that we offer at low or no cost.” He said this is confirmed by the increased number of inquiries into The Good News Center’s services and the growing attendance at their programs.

Under the guidance of Gina and Luca Esposito, veteran expert dance instructors, this year’s competitors included Spencer Davidson from News Channel 2/WKTV, Joe Steet from Steet Toyota, Myles Nashton from AmeriCU and Rocco Arcuri from Adirondack Bank. Even the emcee and judges were local celebrities. WKTV’s news anchor Kristen Copeland served as master of ceremony and Ray Durso from The Genesis Group critiqued as a judge.

The “Dance the Night Away” event celebrated its 10th anniversary by inviting back previous year’s competitors. Kathy Contino-Turner of Masonic Care Community, Paul Sacco from JM Door, and Marolyn Wilson from Holland Farms Bakery, to name just a few, reunited on the floor for a group dance number.

Writer Dyann Nashton works in development at Notre Dame Schools when she’s not accompanying her husband on the dance floor.