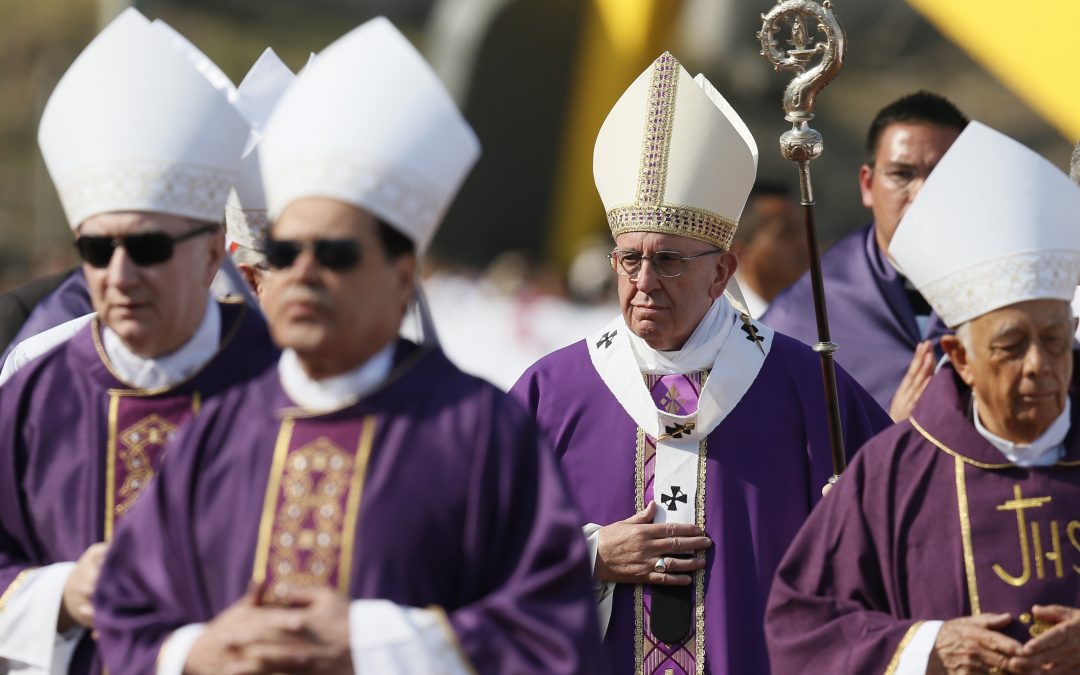 MORELIA, Mexico (CNS) — The devil loves Christians — especially priests and nuns — who are resigned to the violence and corruption around them, Pope Francis said.

Celebrating Mass Feb. 16 at a stadium in Morelia, Pope Francis repeated his frequent call to priests, religious and seminarians to get out of their churches and convents and take God’s mercy and offer of salvation to the world.

But in Morelia, the geographic center of Mexico and capital of Michoacan state — a stronghold of the Knights Templar drug cartel — the pope was not talking just about traditional evangelization.

The pope’s message was an encouragement to those priests and religious who literally risk their lives standing up to the drug lords and urging their faithful to do the same.

Mexico’s Catholic Multimedia Center reported in early February that 40 priests in Mexico have been murdered or simply disappeared in the past 10 years. Many of the cases are clearly linked to the priests’ denunciation of the drug trade.

Pope Francis told an estimated 20,000 church workers gathered in the stadium that the Christian faith is not a matter for the intellect alone or something that occupies a few hours each day or each week. It is about one’s life.

Jesus, he said, did not simply teach his disciples, he brought them into his life, showing them who he was and how they were to live by keeping them with him as he ate, slept, cured, preached and prayed.

“He invited them to share his life,” the pope said, and when he prayed and referred to God as “father,” it was not simply a word, but contained “a sense of life, of experience, of authenticity.”

All Christians, but especially those charged with the pastoral care of others, also must share Jesus’ life with them.

“Woe to us if we are not witnesses to what we have seen and heard. Woe to us,” he said.

In his Lenten reflection, Pope Francis asked the priests and religious to think about the temptations they face in their lives.

“What temptation can come to us from places often dominated by violence, corruption, drug trafficking, disregard for human dignity and indifference in the face of suffering and vulnerability?” he asked.

The big temptation, he said, is resignation.

In the face of overwhelming violence and death, the pope said, “the devil can overcome us with one of his favorite weapons: resignation. A resignation that paralyzes us and prevents us not only from walking, but also from making the journey.”

The devil wants to sow a resignation “which not only terrifies us, but which also entrenches us in our ‘sacristies’ and false securities,” he said. Such an attitude “not only hinders our looking to the future, but also thwarts our desire to take risks and to change.”

Some of the prayers at the Mass were offered in Purepecha, and Pope Francis called for special care of the Purepecha indigenous people. As a model of one who resisted the temptation of resignation, he offered Bishop Vasco Vazquez de Quiroga, the first bishop of Michoacan. Ministering in the mid-1500s, the Spaniard was shocked by how the Purepecha were treated, enslaved and impoverished.

Bishop Vazquez did not fall prey to resignation, but was inspired to act “in the midst of so much paralyzing injustice. The pain and suffering of his brothers and sisters became his prayer, and his prayer led to his response.”

The Purepechas referred to him as “Tata Vasco,” which means “father, dad, daddy,” the pope said. It is the same kind of language Jesus used when referring to God.

Pope Francis ended his homily with a prayer: “Father, dad, daddy, lead us not into the temptation of resignation ….” He also told the priests and religious that the pastoral staff and chalice he was using at the Mass belonged to Bishop Vazquez.

The pope’s somber homily was a contrast with the atmosphere of fiesta that preceded his arrival. Filling the stands and the field of the sports stadium, the priests and religious sang with gusto and chanted papal cheers while jumping up and down or doing the wave.

Pope Francis was welcomed to Morelia with the largest crowds of his Mexico trip, which began Feb. 12. Thousands of people — standing five and six deep — lined miles of roadway leading to the stadium.