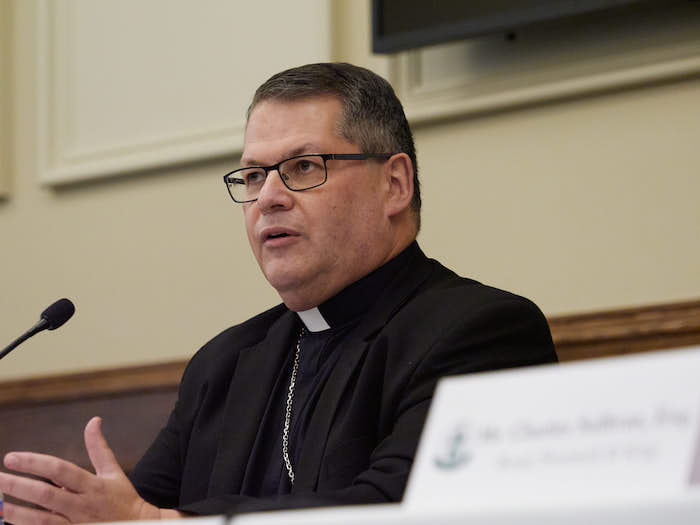 The Diocese of Syracuse filed for reorganization under Chapter 11 of the U.S. Bankruptcy Code June 19, citing the financial implications of more than 100 lawsuits alleging past child sexual abuse by clergy and laypeople as well as the economic impact of the coronavirus pandemic.

“The number of cases, of course, overwhelms us,” Bishop Douglas J. Lucia said during a press conference after appearing at a hearing before the chief judge of the U.S. Bankruptcy Court Northern District of New York. “My first concern is ‘how can I help those who have been harmed?’” he added.

The number of claims could grow, “especially in view of the fact that the CVA [Child Victims Act] window is expected to be extended until August 2021,” the bishop said. “Without a reorganization, the diocese and claimants will face a slow, unpredictable, and costly process that would require years of court involvement. Such a protracted process would delay justice for victims and only prolong their pain and suffering.”

Bishop Lucia called the clergy sex abuse crisis, which dates to 2002, a “very dark chapter” in the Roman Catholic Church. “As your bishop, I must again apologize — and I can’t apologize enough — for the heinous acts that were perpetrated against the young of our diocese, and ask you to all join me in our diocesan commitment that these acts will never take place again,” he said.

Chapter 11 proceedings are not an effort “to hinder claims by victims of sexual abuse,” he said. “It seeks to establish a process by which the claims will be treated in a just and equitable way. I know not everyone will see it in this manner and to those whose wounds are open again, or whose faith is shaken because of these proceedings, I am truly sorry.”

Thirty-eight new cases were filed this week, diocesan officials confirmed. Those cases include claims against individuals who had not been named in previous claims. “Until this week, we didn’t even know there was a claim against them,” Bishop Lucia said during the conference. All claims of abuse are decades old, dating back from 1949 to the 1990s, he said.

“From the start of my ministry among you, it has been my intent to make reparation to all of the victims of sexual abuse for acts perpetrated against them by clergy, employees or volunteers of the Diocese of Syracuse,” Bishop Lucia wrote in a June 19 letter to the faithful.

“However, the growing number of CVA lawsuits against the Diocese presents a risk that those claimants who filed suits first or pursued their claims more aggressively would receive a much greater portion of the funds available to pay victims, leaving other claimants (potentially, even some who have suffered more) with little or nothing. In order to ensure that victim claims are treated justly and equitably, I feel it is necessary to enter into Chapter 11 where available funds will be allocated fairly among all victims in accordance with the harm each suffered,” he wrote.

Filing for Chapter 11 is a voluntary action an entity takes to reorganize financially with the goals of being able to respond to financial claims and to emerge with its operations intact, the diocese explained in an FAQ; this filing also immediately stops all efforts at debt collection and legal actions against the entity.

Only the corporation of the Roman Catholic Diocese of Syracuse is filing Chapter 11. Diocesan parishes; the Foundation, including the HOPE Appeal; Catholic Charities; Catholic schools; the Syracuse Diocesan Investment Fund; the Catholic Sun; and all other separately incorporated funds and entities associated with the diocese are not directly involved in the proceedings.

The diocese’s ministry — which includes 114 parishes, 11 missions, and seven oratories; six Catholic Charities agencies with dozens of programs that serve 100,000 people a year; and 22 diocesan schools — will continue. “We do not anticipate the inability to continue to do business as the diocese does,” Breen said at the press conference. “The primary purpose is the mission work of the diocese, and the funding sources associated with carrying out the mission are intact and they will continue.”

About 158 full- and part-time employees work for the diocese. Workforce reduction is not anticipated as part of the bankruptcy proceedings, Breen said.

Representatives of the diocese, including lawyers from Bond, Schoeneck & King and Mackenzie Hughes, appeared for a hearing before Chief Judge Margaret Cangilos-Ruiz at 9:30 a.m. The hearing took place virtually at BSK’s offices because of the novel coronavirus pandemic.

A day after the window opened, 19 suits had been filed against the diocese; by Sept. 12, 23 had been filed. At that time, the diocese said it did not anticipate pursuing reorganization under Chapter 11 and would continue to evaluate options as the year progressed.

The claims brought under the CVA are separate from those settled through the diocese’s 2018 Independent Reconciliation and Compensation Program. In that voluntary program, two outside administrators determined settlements for victim-survivors who had previously notified the diocese of their abuse by diocesan clergy. Eighty-one victim-survivors settled their claims and received compensation totaling $10,982,500 through the IRCP, Cummings said.

Filing for reorganization “will require the Diocese to be under court supervision in its Chapter 11 case for many months,” Bishop Lucia’s letter noted.

The diocese will work with its attorneys to create a reorganization plan “detailing how its available assets will be used to pay claims and negotiate reasonable settlements,” he said.

As part of that plan, “the diocese intends to create a fund with a pool of money from both diocesan funds and money from insurance carriers”; any restricted donations — including those to the annual HOPE Appeal and the Cathedral Restoration Fund — will not be used to pay legal settlements, according to the FAQ.

While there is no set schedule for the reorganization, the diocese said its “hope is to bring this to a conclusion as soon as possible.”

In pledging intolerance to clergy sex abuse, Bishop Lucia at the press conference alluded to the ongoing protests following the police killing of George Floyd that call for an end to systemic racism. “If there’s any systemic problems, if there’s any systemic situations, then they need to be addressed,” he said.