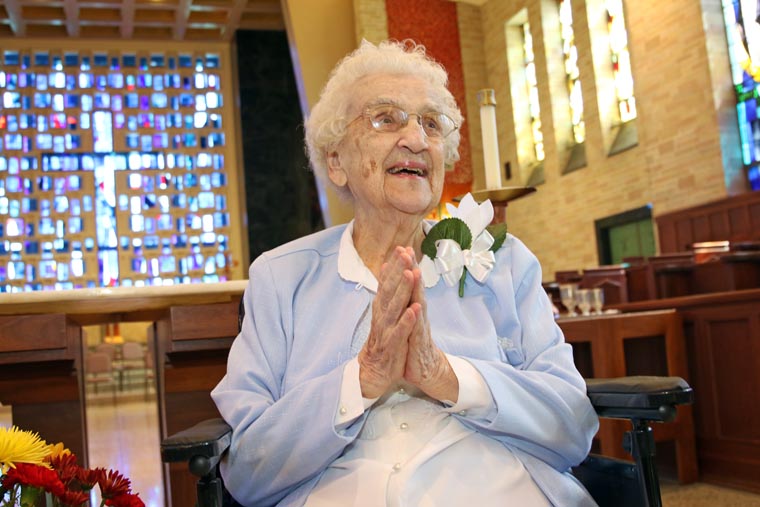 She was a Dominican sister of Amityville for 90 years. Although no formal databases are kept, she may have been the oldest religious sister in the United States, according to her order.

Her funeral Mass was celebrated Dec. 6 at in St. Albert’s Chapel at the sisters’ Queen of the Holy Rosary Motherhouse in Amityville, followed by burial on the convent grounds.

“The Sisters of St. Dominic of Amityville naturally feel the loss of Sister Grace Regina, but in this beautiful season of waiting which is Advent, we know how long she has waited to be with her God,” Dominican Sister Patricia Hanvey, assistant prioress, said in a statement.

“And so we now trust that Sister Grace joins the Dominican Choir of Saints in praying that our mission continues,” she added.

Sister Grace was well known for her long vitality — being featured this year in Newsday, on the News 12 cable TV channel and in The Long Island Catholic, the magazine of the Diocese of Rockville Centre.

She also was known for her big smile, passion for teaching and constant love for God.

Being a Dominican sister — part of the Order of Preachers — she was still spreading God’s message on her 106th birthday, which was Nov. 9. Celebrated with a room full of family, friends and a television crew.

She told the viewers of News 12, “Do the best you can and entrust the rest to God!”

Sister Grace was just 15 when she entered the convent in 1927, which was common at that time. She was a teacher most of her life. She taught elementary school at Our Lady of Guadalupe Parish in Brooklyn, and math at Bishop McDonnell Memorial High School and Maria Regina Diocesan High School in Uniondale. She taught in Puerto Rico for eight years.

She was the chairman of the psychology department and director of counseling and placement at Molloy College, which was founded by her religious order. She even spent a year at Covenant House in Manhattan ministering to runaways.

In 1984, after she retired, she volunteered in parish ministry at Corpus Christi Parish in Mineola and later at Our Lady of the Miraculous Medal in Wyandanch, where she taught in the Dominicans’ Opening Word program that serves immigrant women.

She was passionate about bringing people to God through workshops about body, mind and spirit and also led prayer groups at Dominican Village, an assisted-living community also founded by the sisters.

Sister Grace had a bachelor’s degree and a master’s degree in math from St. John’s University in Jamaica, as well as a doctorate in counseling and guidance from Fordham University. She had a beautiful singing voice and loved adding harmonies to songs.

“She lived an awesome life and touched so many lives,” said Janice Woodiwiss-Schneider, a great-niece of Sister Grace who considers her aunt her mentor. “I will always remember that she said she had no regrets in life.

“She said at her 100th birthday that she could not think of one thing in her life that she would change if she could. How many people can say that?”