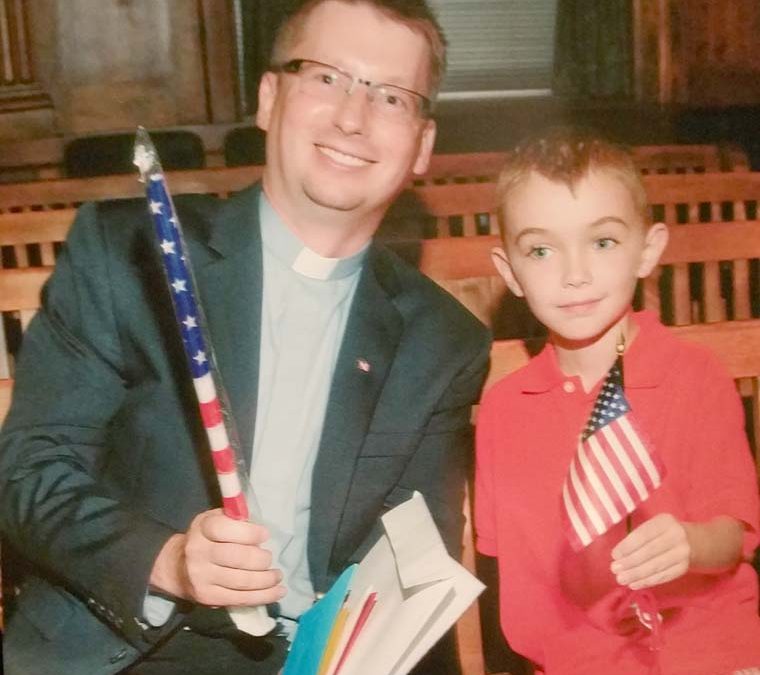 As a young boy living in Poland, Father Arthur Krawczenko, pastor of Sacred Heart – St. Mary, Our Lady of Czestochowa Church in New York Mills, dreamt of coming to the U.S., a country the Polish people perceived as a land of opportunity.

So it was a dream come true Aug. 20, when Father Krawczenko became a U.S. citizen during a naturalization ceremony at the U.S. District Court in Utica. Father Krawczenko was one of 62 candidates for citizenship, and the “atmosphere within the courtroom was one of pride and accomplishment,” according to Sacred Heart – St. Mary’s parishioner Sharon Jachim.

“I was overwhelmed with joy and happiness,” said Father Krawczenko. “It’s a big commitment. I see my future in this country.”

Father Krawczenko arrived in the U.S. 12 years ago, shortly after his ordination. He served at St. John’s in Binghamton, St. Stephen the King in Oswego, Our Lady of the Rosary in Hannibal, St. John the Baptist in Rome and St. Anthony’s in Chadwicks before coming to Sacred Heart – St. Mary’s four years ago.

At the ceremony, representatives of the U.S. Department of Homeland Security Citizenship and Immigration Services presented the candidates. The Oath of Citizenship was administered by the Deputy Clerk.

According to Jachim, Father Krawczenko’s parishioners, friends and family filled a good portion of the courtroom, offering support and wanting to be a part of the experience.

“The parish community is sharing in the pride that Father Arthur has in becoming an American citizen,” said Jachim. “Everyone recognizes that this is an important decision for Father Arthur, one he has been working toward, and his parishioners, friends and family are fortunate to share this experience and accomplishment with him.”

Jachim said that as Father Krawczenko’s name was called, there was an “outstanding ovation of applause” that lasted for several minutes.

Father Krawczenko was overwhelmed by the love and support he felt. “At least 50 people came to support me,” he commented.

After the ceremony, a reception for the new citizens was held at the Federal Building.

That evening, a celebratory reception honoring Father Krawczenko was held at Sacred Heart – St. Mary’s Church. “Over 200 people came to congratulate me,” the new citizen said. “I am so happy, and I feel the presence and support of my parishioners. I’m really blessed by the people in the parish.”