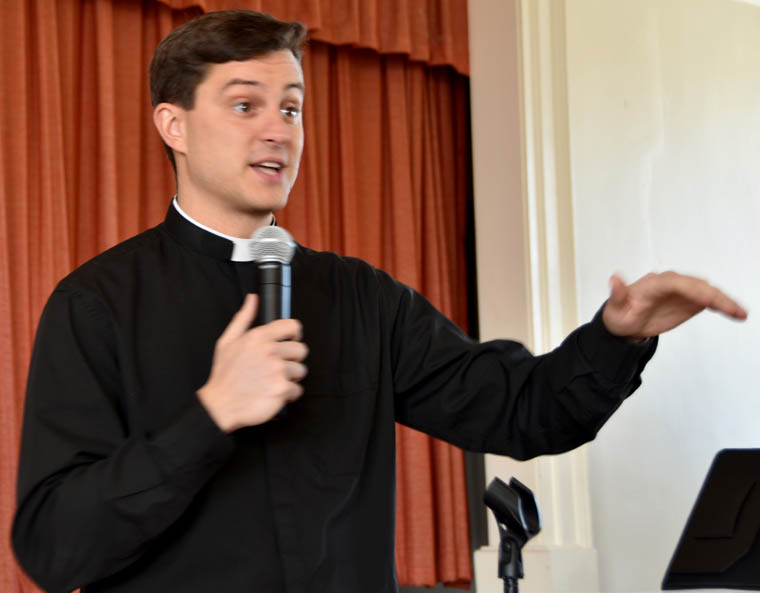 He said many entities pigeonhole him: a DNA test — ancestry (five percent Irish, to his surprise); birth certificate — a Ballard; Board of Elections — political party; Google — an ID based on searches; the IRS — a certain tax bracket; the Red Cross — Type O; science — “a somewhat intelligent ape”; the evil one —  “an identity for me and for you.”

Father Ballard spoke about individualism and identity as “signs of the times” at a Lenten Soup & Scripture talk for diocesan employees March 27 at the Chancery Annex in Syracuse. He is not fooled by society’s labels. He said his real identity — his “core” — is embodied in Romans 14:8: “For if we live, we live for the Lord, and if we die, we die for the Lord; so then, whether we live or die, we are the Lord’s.”

“We know whose we are, and we know who we are,” said Soup & Scripture organizer Mary Hallman, diocesan director of evangelization.

Introducing him, diocesan schools Superintendent William Crist noted that Father Ballard played baseball and swam competitively at Charles W. Baker High School in Baldwinsville, “and he even had a girlfriend. And yet this voice kept coming to him, getting more persistent and louder: You should consider becoming a priest.”

Ordained in 2010, Father Ballard is the pastor of Our Lady of Hope Church in Syracuse. He serves on the diocesan vocation team and he is an instructor in the formation for ministry program. He loves to teach and to travel, Crist said, and he hangs out with his two cats.

Father Ballard said that 50 years ago, people would say that the most basic unit of society was the family. “Many people today,” he said, “would probably say the fundamental, most basic unit of society today is the individual. … That’s what our society sort of preaches, that’s what our country sort of preaches in many ways,  the media, television — individualism.”

He cited a “decline in organizational memberships, among millennials especially. And that certainly stretches to the Church. … Millennials don’t want to group up like that. … You want to be able to declare who you are.”

In his ministry, Father Ballard does a lot of work with teens, and “they struggle with this identity thing. … Have to claim yourself to be something, and especially if a kid is struggling with sexuality, the pressure to identify.”

He explained how the Gospel looks at identity and individualism.

He added: “I’m a child of God to my core. … Not even a sinner. I mean, I am that, but God takes that and he baptizes it and he blesses and he sanctifies it so even that is no longer my identity. My identity to my core is son of God, child of God, beloved.”

“From the Gospel’s perspective,” he added, “I don’t define who I am, I discover who I am. … I am made by a loving God who has a plan for me and for you. … Listening to the voice of God, I’m going to discover who God has made me to be.

“And living in line with that will be better for my soul in the end. I find myself happier in the end, as I live out who God made me to be.”