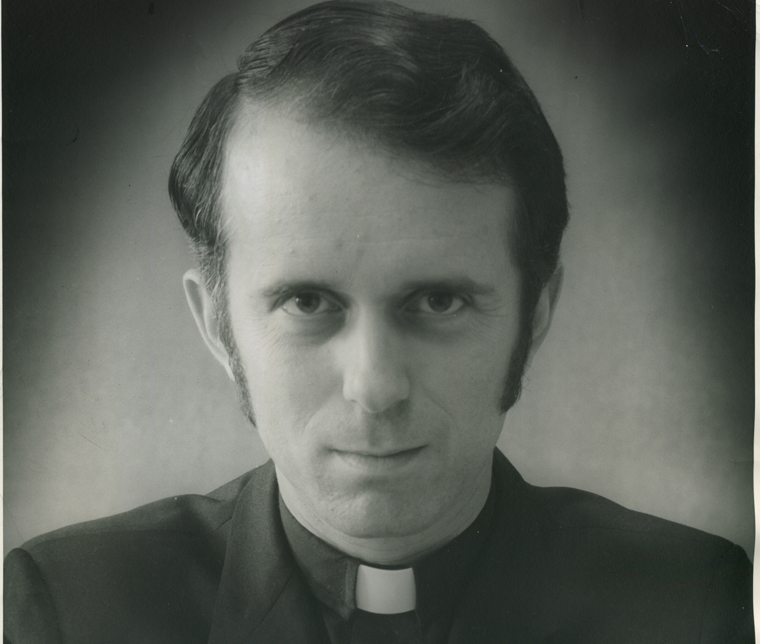 The soft-spoken, cerebral priest drew the appreciation of clergy and the loyalty of lay people.

Long ago Bishop Frank J. Harrison wrote of Father William C. Cahill, who died Nov. 15: “I see and recall your many efforts at touching the hearts and healing the wounds and leading the people forward.”

Bishop Harrison added: “You will experience much satisfaction and peace for all the good that you have done and accomplished for the house of the Lord.”

“Ideal as a priest and a friend,” commented Carol Wutzer of Loudonville in Albany County.

“He was a scholar in a lot of ways,” said her husband, Edmund Wutzer.

“He was a great person and we miss him,” said his niece Anne Cahill Hansen of Menlo Park, Calif., who enjoyed her uncle’s relatable, well-edited homilies that observers noted were condensed on a little piece of paper.

Described by friends and family as ever-slim, kind, and disciplined, Father Cahill died at the age of 85. He had suffered from dementia for several years, and he suffered a stroke on Oct. 30 this year. He was taken to Albany Medical Center and then to the Teresian House health-care facility in Albany, where he died.

He was always drawn to water, and he liked to downhill ski with relatives. His routines of self-improvement included hitting the gym in the morning even into his 80s, walking, and reading. He sought to improve others too, notably prison inmates.

“Through his priestly service, from the rising of the sun to its setting, in imitation of Christ the high priest’s own ministry on the cross, Father Cahill sought to lead people forward in the light of Christ, whether in the seminary or parish or prison.”

Father Cahill was born and raised in Utica. He graduated from the St. Andrew and St. Bernard seminaries in Rochester and Theological College in Washington, D.C. He also earned a master’s degree in history from Syracuse University and a master’s in counseling from SUNY Albany.

Ordained on May 20, 1961, he served in parishes in Skaneateles, Syracuse, Fayetteville, Utica, Canastota, Hamilton, and Rome. He also taught at Bishop Ludden Jr./Sr. High School in Syracuse, and he served as the chaplain at the now-closed Oneida Correctional Facility for 25 years. Other special assignments for the Diocese of Syracuse included the Commission for Ecumenism and the Vocation Promotion Committee.

Father Robert Weber, representing the Chaplaincy of the New York State prison system, told the funeral congregation that in addition to the Oneida Correctional Facility, Father Cahill served as chaplain at two other correctional institutions that are also closed now.

“He allowed the men that were in there incarcerated to see the presence of God,” Father Weber said. “I think of Matthew 25 where he says, ‘When I was in prison you came and visited me.’ And he did that so often, he did that so beautifully. He really brought the presence of God to those men. He allowed them to see within themselves the light of Christ — that light that sometimes was dark, the light … that so often was not a part of them. …

“So often I heard when I went over there how that small light in the midst of a very dark place would allow them a sense of hope. It would allow them the presence of God, whether raining, snowing, walking on the walkway going back and forth to their programs.  …

“It would be something that reminded them that God was still with them — even though so often people deserted them, even so often they felt alone, even so often they struggled with so many different things. … He allowed them through his counseling skills to find a better path in life.”

Father Cahill’s path included residence in Saratoga Springs from 1990 to 2016, said his niece Cahill Hansen, adding that he also had a place for a time on Marco Island, Fla. He had a townhouse with a view of Saratoga Lake from 1990 to 2008 and then he downsized to a place that did not have a lake view.

Cahill Hansen said, “Out of all the nieces and nephews, I’ve been the closest to him.” He baptized her in 1975, and her first trip across the country to see him was in 1978. “He really liked living near water,” she said, and in fact he had a house on Skaneateles Lake — “we have home movies from it.” She visited again in 1986 when her uncle was the pastor at St. Mary’s in Hamilton, but by then he had sold the Skaneateles home.

She said Father Cahill was only four years old when his father died, and his two sisters died quite a while ago. Father Cahill’s brother, Richard, who is almost 89 and residing in Menlo Park, earned a doctorate in chemistry and worked as a professor at junior colleges.

One of her brothers was his high school valedictorian, Cahill Hansen said, “and we always kind of credit it to the Cahill side of the family.”

She frequently got in touch with her uncle who had “kind of a sense of sophistication about him. He was a priest but he did enjoy stuff like a couple of amazing grandfather clocks.”

His friends Carol and Edmund Wutzer did an “amazing job” looking after Father Cahill’s care and overseeing things, especially in the last five years of his life, Cahill Hansen said. “Really, really grateful to them, they really did a lot for him,” she said.

The Wutzers met Father Cahill in the 1970s when he was the Associate Pastor of Our Lady of Solace Parish in Syracuse. He mentored Carol in her religious-education work in the parish. The Wutzers moved to the Albany area in 1979 and Father Cahill eventually lived with them for two years as he worked as a prison chaplain.

“And I happen to be the former Chairman of the Commission of Corrections,” Edmund said, “and I would actually see him in the prisons when I would do my visits.”

They would watch movies in the living room and Father Cahill would have no more than two drinks.

“I could talk to him about anything,” Carol said. One time she was doing the dishes with her mother and they heard from the living room:

“Car-r-r-r-ol.” Carol figures she had not put the Christmas tree in its holder securely enough, and it fell on top of Father Cahill.

Carol said one of Father Cahill’s parishioners at St. Mary’s was amazed at his “beautiful homilies, and how did he get all that information on one little piece of paper, which was just like him. … Father had some key words, and he’d give a nice, very concise homily. … He was a learned man!”

“He was part of the family,” Edmund said. “It was like having a brother. We were responsible for him. … And right now, I am his executor [with] a power of attorney, so right now I’m dealing with his entire estate.”

Father Jason Hage, St. Mary’s pastor and diocesan Director of the Office of Vocation Promotion, was vested in the cassock and served the Mass for the bishop. Father Hage said that Father Cahill’s family members could not be physically present due to the coronavirus pandemic, so they joined by livestream from California, Georgia, and Florida.

“It was a deep privilege and honor to conduct the funeral rites for Fr. Cahill,” Father Hage wrote in an email. “He was beloved by the parish community. He was remembered as a perpetually kind and gentle soul, and truly a holy priest. He is now the fourth priest buried in our Catholic cemetery [St. Joseph’s] in Hamilton, which is a tremendous honor for our faith community in the region.”

“The sun has gone down for the last time on the earthy life of Father William Cahill,” Bishop Lucia said, “and yet at its setting the words spoken long ago on a hill far away reach our ears [Luke 23:43]: ‘Amen, I say to you, today you will be with me in Paradise.’”